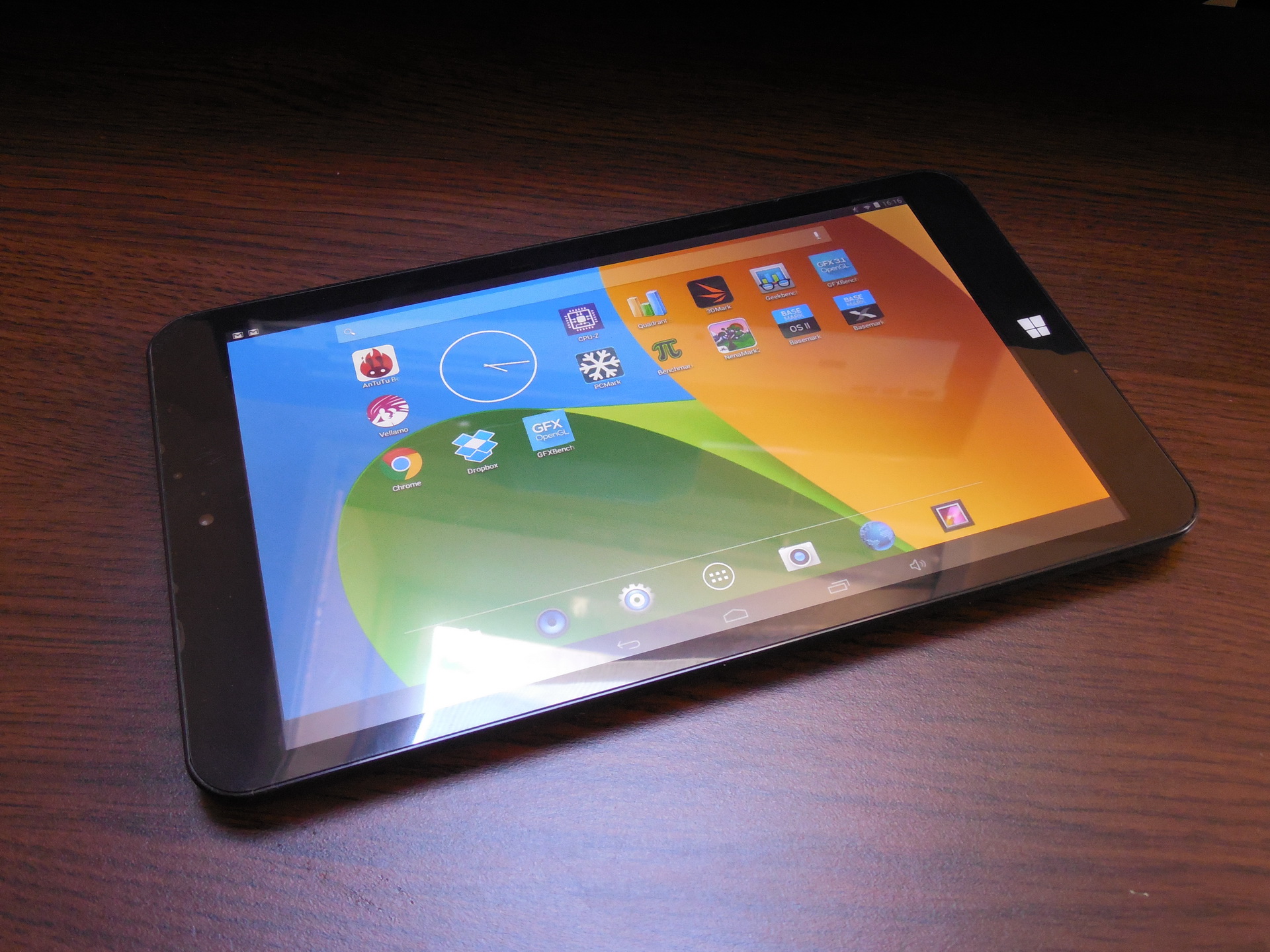 Chuwi is an Asian brand that we know, since we cover a vast amount of tablet makers, but some of you may not have heard of them. Well, we have one of their products, a dual boot model called Chuwi Vi8, that we tested for the past weeks and now we can formulate a conclusion. This is the first dual boot tablet we test, so it’s an exciting premiere. 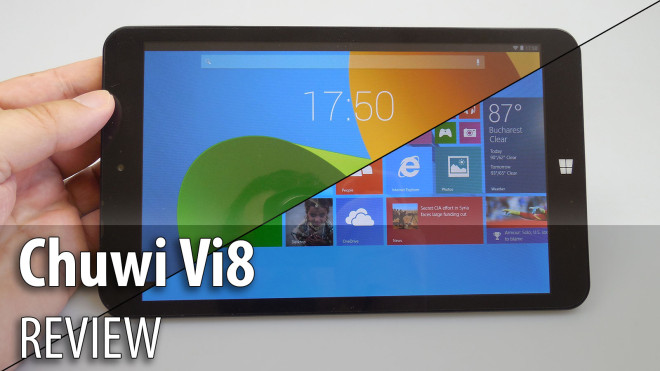 Launched at the end of 2014 in a Windows 8.1 only version, the device then came earlier this year in a dual boot version with a very good price. The price migrated from $120 to $90 and now $85, at least on Gearbest. One of the most appealing aspects here is the Office license that comes with the product. Design-wise, this is a pretty typical 8 inch tablet with a waistline of 8 mm and a weight of 310 grams.

It uses a plastic case, a pretty solid one and reminds me of the ASUS VivoTab Note 8, at least as far as the format is concerned. This is a rather portrait oriented device, with thick bezels and good grip. It has rounded corners and its protective screen film has already been applied from the factory. The tablet features a camera upfront, a Windows button and probably some sensors, too. 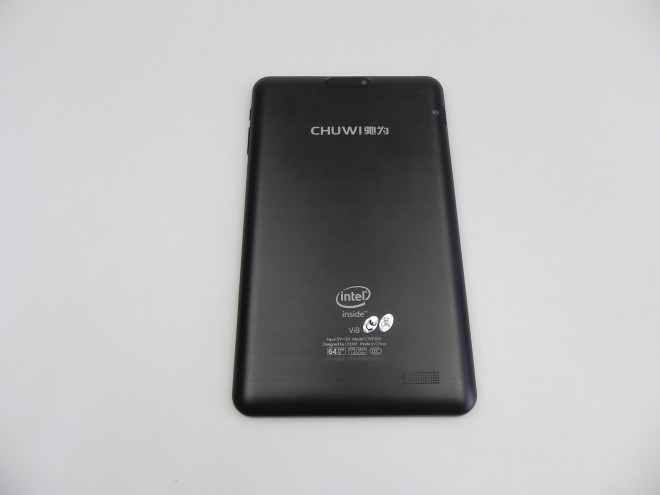 At the back there’s the main camera and speaker, while at the top we find the audio jack and microUSB port, plus the mini HDMI port as well. There’s nothing at the bottom, while on the left side we found the microSD card slot. On the right there’s the On/Off button and volume buttons, both with OK feedback, but a flimsy feel to them. The design is OK for an affordable model, especially one priced below $100. 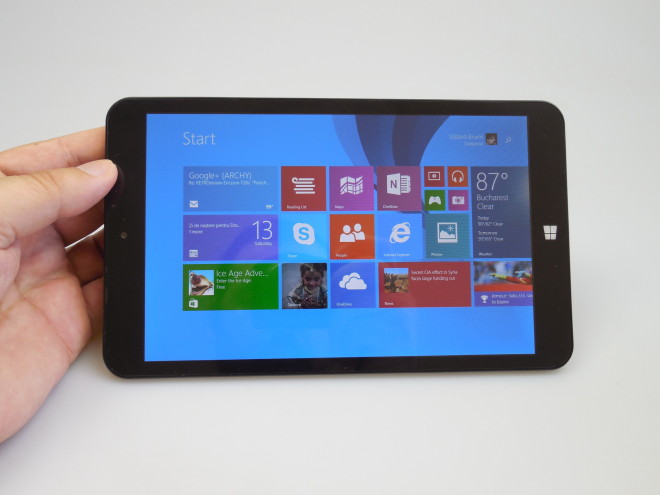 Then there’s the microSD card slot with support for up to 64 GB extra. At the back we’ve got a 2 megapixel camera, while upfront rests a 0.3 megapixel shooter. On the connectivity front there’s WiFi 802.11 b/g/n, Bluetooth 4.0, microUSB 2.0 and mini HDMI. Finally, the Vi8 offers a G sensor and a 5000 mAh Li-Ion battery, that on paper offers 5 hours of video playback. The charger bundled with the slate is a 5V and 2A unit.

Our test, that involves HD video playback in a loop, with WiFi on and brightness at 50% gave us 5 hours and 98 minutes, which is OK for this price and considering the size of the battery. Still, we’re below the ASUS VivoTab Note 8 and its 8 hours and 40 minutes of playback time, but not very far from the Nexus 7 2013 and its 7 hours. At least we beat the Evolio Go Fun 3G model and its 4 hours and 22 minutes. 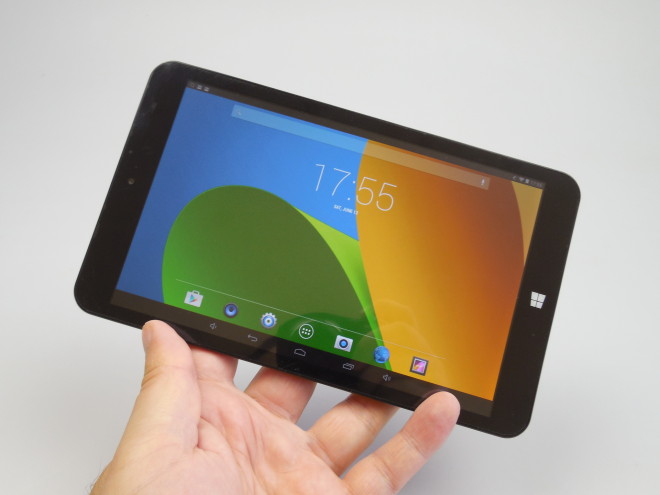 We also performed a PCMark battery test, that simulates continuous usage and we reached 3 hours and 29 minutes here, once again beating the Evolio Go Fun 3G and its 2 hours and 34 minutes. We’re still above the average of other tablets. Charging takes 2 hours and 58 minutes, which is better than the Allview Viva H7 Xtreme, that requires 3 hours and 35 minutes and it’s also a bit below the ASUS VivoTab Note 8, that requires 2 hours and 40 minutes.

There are no Power Saving features here and drawing the line, this is a reasonably good battery, allowing you to play about 3 full length movies. On the audio side there’s a single speaker at the back and you’ll be using the stock Android music player on KitKat, while Xbox Music handles playback on Windows 8.1. The acoustic experience is not very loud and the sound is kind of broken and lacking bass. There’s also a bit of muffling happening, but the high notes are heard OK. 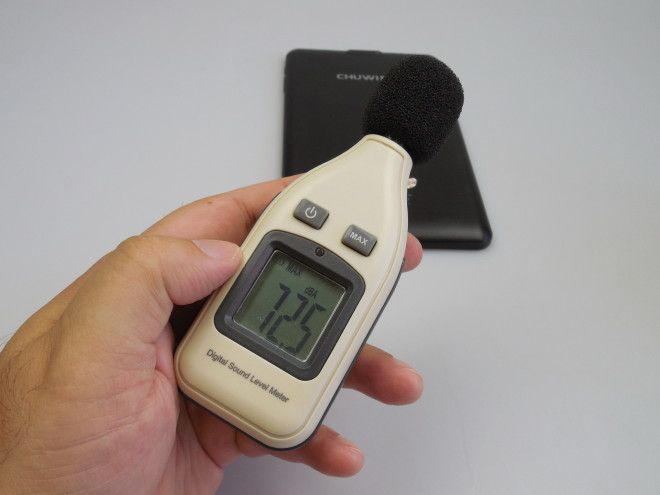 The equalizer is the stock one and it changes the tune depending on genres and using 5 sliders to tweak the experience. Overall, the experience is underwhelming and we also used a decibelmeter to test the device, achieving 71.6 dBA at the front and 72.5 dBA at the back. We usually record values over 80 dBA, so this is clearly not in the acceptable range.

The Xiaomi MiPad for example got 83.3 dBA and the Allview Viva H7 Xtreme was considered quiet at 74.3 dBA, so this is a very low volume. Now we move on to the display, the Achiles heel of the tablet. We’re dealing with an 8 incher, that offers a 1280 x 800 pixel resolution and an IPS LCD panel. The gallery is used as the video player here on Android, while Xbox Video takes care of the playback on Windows 8.1. 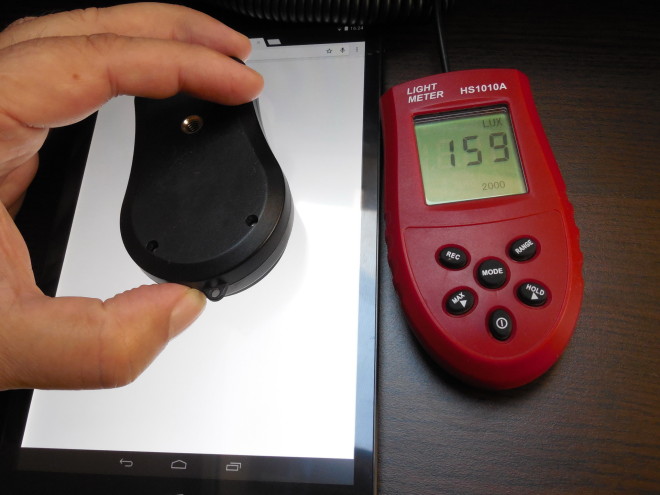 The viewing experience involves realistic colors, wide view angles and a not at all impressive brightness. The contrast is also poor and the tablet can’t handle the sun at all. There’s no Gorilla Glass protection here and the protection layer of plastic is applied on the screen from the factory, by the way. Pixels are of the RGB Stripe variety here and the LUX level is 153 LUX, as measured by our luxmeter.

This is one of the lowest values measured ever by us, even though we were also disappointed by the Allview Viva H7 Life and its 201 LUX in the past. The Transformer Book T100 Chi was also considered not so bright at 281 LUX, by the way, so it’s clear that going below 200 LUX is a letdown. The screen was clearly sacrificed for the sake of a lower price here. 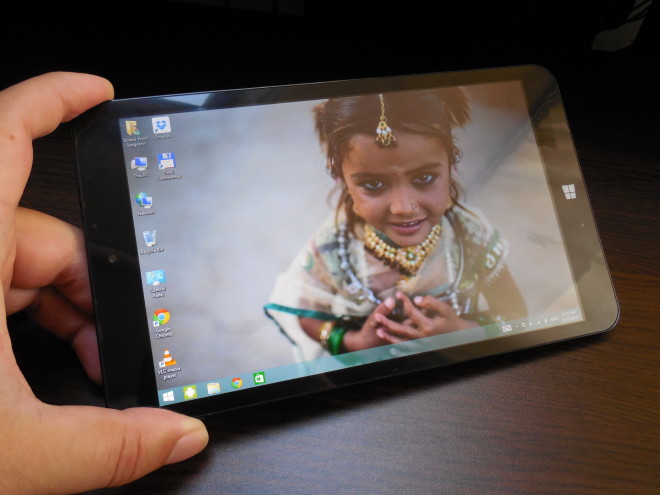 The Settings area includes a special option for the screen, called Intel Smart Video. It reduces the noise and eliminates artefacts in your clips. The camera offered here is present just to check one more spec on the hardware list. This model features the stock Android camera UI and also the usual Windows camera app. The 2 MP camera is able to take panoramas on Android and offers options for exposure, location, timer, size, white balance and scene.

Windows offers a timer and exposure. The quality is neglectable here and the editing options are the basic ones. As far as performance goes, the tablet went to 44 degrees Celsius, after playing the game Riptide GP2 for 15 minutes, so it gets a bit hot. The browser available here is the stock Android one, that’s kind of slow, while the IE on Windows 8.1 is a bit faster. 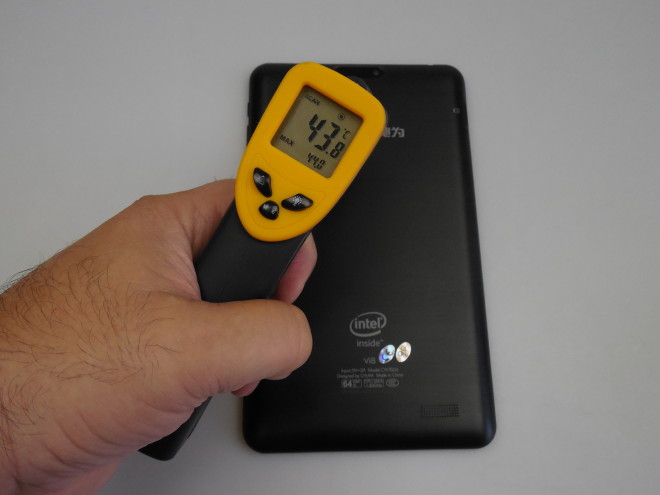 Also, the keyboard in Windows 8.1 is better spaced and comfier compared to the Android one. And now let’s see the benchmarks of this sub $100 tablet. We compared its Intel quad core 64 bit processor to the Snapdragon 600 of the LG G Pad 8.3 and the Intel Atom Z3740 quad core of the ASUS VivoTab Note 8, plus the octa core MediaTek chip of the Allview Viva H7 Xtreme. 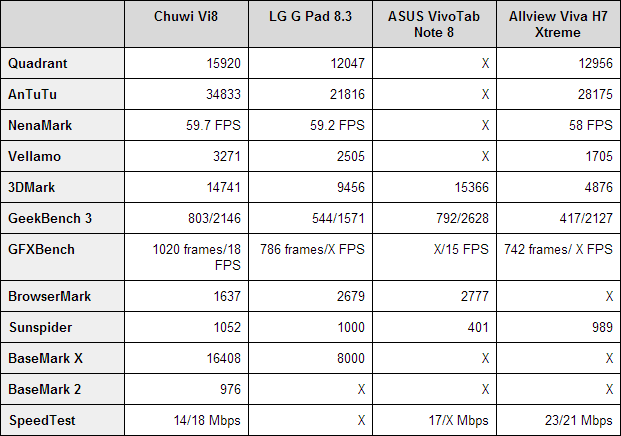 Overall, this model wins 7 out of the 11 tests and the 12th is made as a comparison with the iPad Mini 2, to show that we’re not very far from it, performance-wise. Some of these results are surprisingly good considering the price. An even nicer find is the fact that there’s no lag in either Android or Windows 8.1. Then we moved on to the analysis of the platforms.

There’s not much of a surprise here. Android 4.4.4 is basically available in its stock version, plus a few tweaks. We get the usual swipe based multitasking, dual dropdown areas, Quick Settings that now feature a screenshot button and an OS switch button. Turning the slate in landscape results in the appearance of two virtual volume buttons at the bottom of the screen. 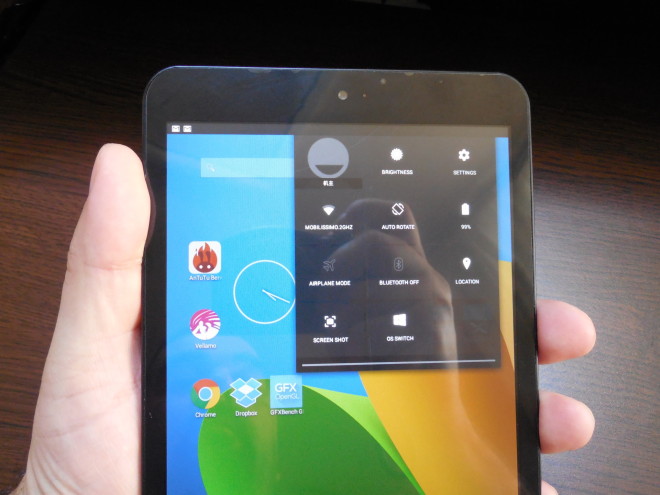 Widgets are stock and the Settings area is probably the only one heavily modified. It has a custom set of icons and offers HDMI settings, the option to add an extra user and sensors calibration. There’s also a floating widget on the screen that lets you tweak performance on the go, courtesy of a Chinese language app. The preinstalled app list includes Baidu, File Manager, Lpal (a voice command app), Maps, Reading Joy (e reader), TaoBao, Tencent Video, Widi Receiver and 2 Chinese apps with unknown purpose. One of them accelerates the device.

Booting from Android 4.4 to Windows 8.1 takes 40 seconds, while booting from Windows 8.1 to Android takes 50 seconds. This may fluctuate over time. By the way, in Android you can use Windows button as its very own Home button. Windows 8.1 offers the standard experience, with swiping down to close an app, multitasking based on snapping two windows together and gestures. 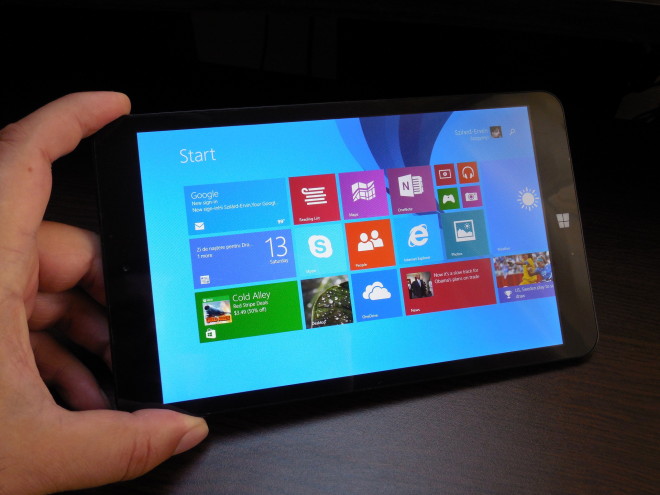 Preinstalled apps include Bing, OneDrive, Maps, OneNote, Skype and there’s also the x86 desktop environment where you can install apps via EXEs. There’s no lag in either OS, once again. One last mention goes to the bundled USB OTG cable and the mini HDMI port that allows us to put the device’s image on the big screen. Now let’s see the verdict of the product.

We give this model a 9 for design, an 8.2 for hardware, a 9.5 for OS and UI and finally a 10 for the price. The average here is 9.17 out of 10 for this product, a bit of a Chinese surprise, that can be used for both fun and business, at less than $100. Keep in mind you also get Office here and two OSes, which means two stores to download apps from. The screen sacrifice and audio can be tolerated at this low price. Buy from here! 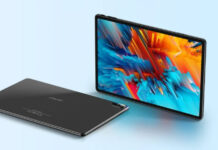