Barnes & Noble is adapting to the digital age, by making e-readers and now also full fledged tablets. Well, actually Lenovo is making the tablet and B&N is providing the licensing and book library. Their joint project will be turned into a tablet, which debuts in early April, priced at $130.

It’s been almost 3 years since Barnes & Noble debuted a Nook tablet and we’ve heard multiple times that they may discontinue the line. Now all rumors are denied by the latest announcement, that there’s a 10 inch Nook tablet incoming. It’s designed in collaboration with Lenovo and it’s an Android device powered by an octa core processor, with a 10.1 inch HD IPS display, that has been certified for low blue light emissions. We also have 32 GB of storage, a microSD card slot and a battery with the promise of up to 10 hours of web browsing on a single charge.

We also get dual audio Dolby Atmos speakers and preinstalled we find a Nook app for ebooks, newspapers and magazines. There’s also Google Play and Google Assistant, FM radio and Kids Space from Google. This latter mode is particularly useful, providing the little ones with age-appropriate content and books. Expect a debut in early April in physical stores and online on the Barnes & Noble website. The last nook device was introduced in 2019, the GlowLight Plus and right now the Nook Glowlight 3 is sold out, as is the rest of the range, as the company focuses on reshaping the retail footprint from large mall locations to small boutiques.

A big innovation was the addition of a secondary color display to the E-Ink screen. The brand also worked with Samsung on custom Galaxy Tab units before, but the Lenovo pairing is a whole different ball game. 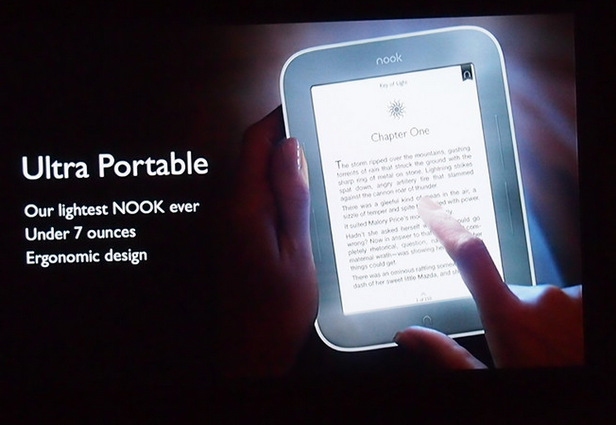