After testing the ASUS VivoTab RT, the first Windows RT slate we played with, we also did a premiere review of the ASUS VivoTab Smart. This 64 GB slate is actually a good deal, at $499, the same price as the VivoTab RT. This is a dual core Intel Atom model with a not so thin design, but still appealing. 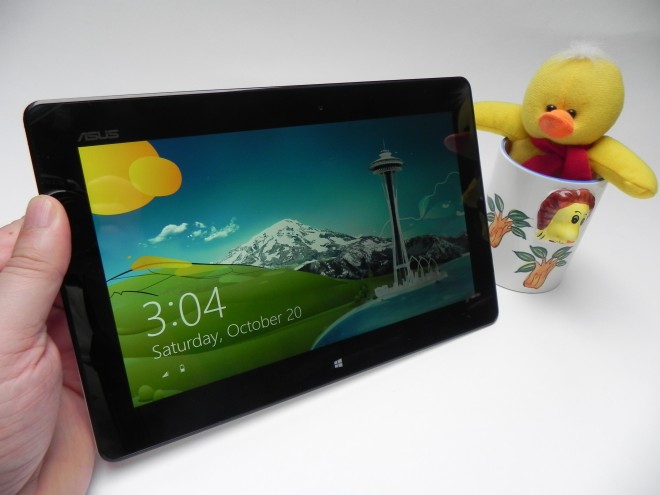 The tablet here doesn’t have a case made mostly of metal, or an ultraslim case, but its plasticky chassis has good grip and decent material quality, plus good build and resilience. At the back we’ve got an 8 megapixel camera with LED flash, a nice shiny ASUS logo and the Windows 8 logo. Volume buttons are on the side, as well as the microSD card slot, micro HDMI, micro USB and audio jack. The On/OFF button is at the top and the Windows button below the display.

The screen is a bit of a fingerprint magnet, but it’s less glossy than one would expect. ASUS VivoTab Smart measures 9.7 mm in thickness and weighs 580 grams, which is pretty decent for a modern device’s weight. As far as hardware goes, the slate offers us an Intel Atom dual core 1.8 GHz chip with Burst technology. There’s also a Qualcomm 9200 modem on board, support for LTE and HSPA+ and you should know that this model is available in both black and white. The 8 MP camera at the back has a 5 element lens, LED flash and autofocus.

The display upfront is a 10.1 inch screen, with IPS panel, 1366 x 768 pixel resolution and LED backlight. It has 16:9 aspect ratio and the tablet’s specs include NFC, SonicMaster audio technology, a front 2 megapixel camera and 2 GB of RAM. Aside from the 64 GB of internal storage, there’s also 32 GB of cloud storage from ASUS, for 3 years. WiFi and Bluetooth 4.0 are on board as well, as well as a 25 Wh battery, a Li-Polymer unit, that gives you about 8.5 hours of functioning time.

Finally, ASUS VivoTab Smart provides a G Sensor, gyroscope and compass. We tested the audio side of the device and found the volume to be good, the bass to be quite nice and the SonicMaster tech to work just fine. You can either rely on the “Metro” player in Win 8, or simply use desktop solutions like the good old Winamp. Voice clarity and guitar clarity is guaranteed by this audio setup. On the video side, the tablet supports Full HD playback and while the colours and brightness are quite good, the viewing angles could be a bit better. 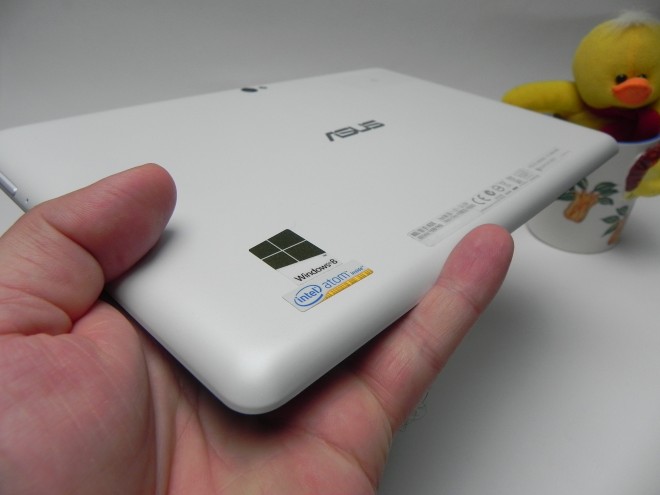 As far as the camera goes, as usual ASUS surpassed itself and all the 8 megapixel sensors on ASUS slates are guaranteed quality. This sensor in the case of the VivoTab Smart brings you autofocus, LED flash, 5 element flash, BSI, F2.2 aperture, 1080p video capture and the ability to take 4:3 and 16:9 shots and videos. You can play with effects, brightness, contrast, ISO values from 50 to 800 and options like Denoise for example, at least in the ASUS Camera app, that also offers a panorama option.

There’s a video sample below, taken with the tablet’s camera and a full gallery of photos here.

As far as the Windows 8 experience goes, the experice is the one we already know from the VivoTab RT, with the Charms bar on the right side, triggered by a swipe and the multitasking that involves swiping from the left side. The desktop mode is all Windows 7, .exe file installs and mouse action, plus folders, while the Windows Store provides you some apps, aside from those you can install yourselves.

We also show you the email tile/app in the video review, plus IE 10 and its tabs and settings, plus its fast loading times and comfy virtual keyboard. We have fun with some handwriting, then we access the Contacts area, play with Chrome in its desktop version and even navigate in Bing Maps. The ASUS Camera also gets a drive test and the messaging app is quickly demoed. ASUS also provides an e-reading app called MyLibrary, plus Supernote, a note app on steroids, with support for integrating pictures, videos, sounds, text, handwriting and drawing.

We give even Photoshop a spin, with the mouse attached to the tablet and at the end of the review we even go as far as connecting a Windows Phone 8 handset, the HTC 8X, to show you how such a phone interacts with a Win 8 slate. Once the connection is done, a Windows Phone app is installed on Windows 8 and the experience is greatly streamlined and very subtly integrated with the entire Win 8 experience on the slate. Very well done! So, let’s check out the pros and cons of the device now!

Overall, we give the slate a 9 out of 10 for design, 9 out of 10 for OS and UI and 9 out of 10 for hardware. This feels like a modern tablet and it’s even not that heavy or thick, even though it has an Intel CPU and provides a full desktop Windows experience. It’s well worth the total grade of 9 out of 10 we award it and we look forward to more devices coming to us. This one is priced at $499 and it was just showcased at CES 2013.