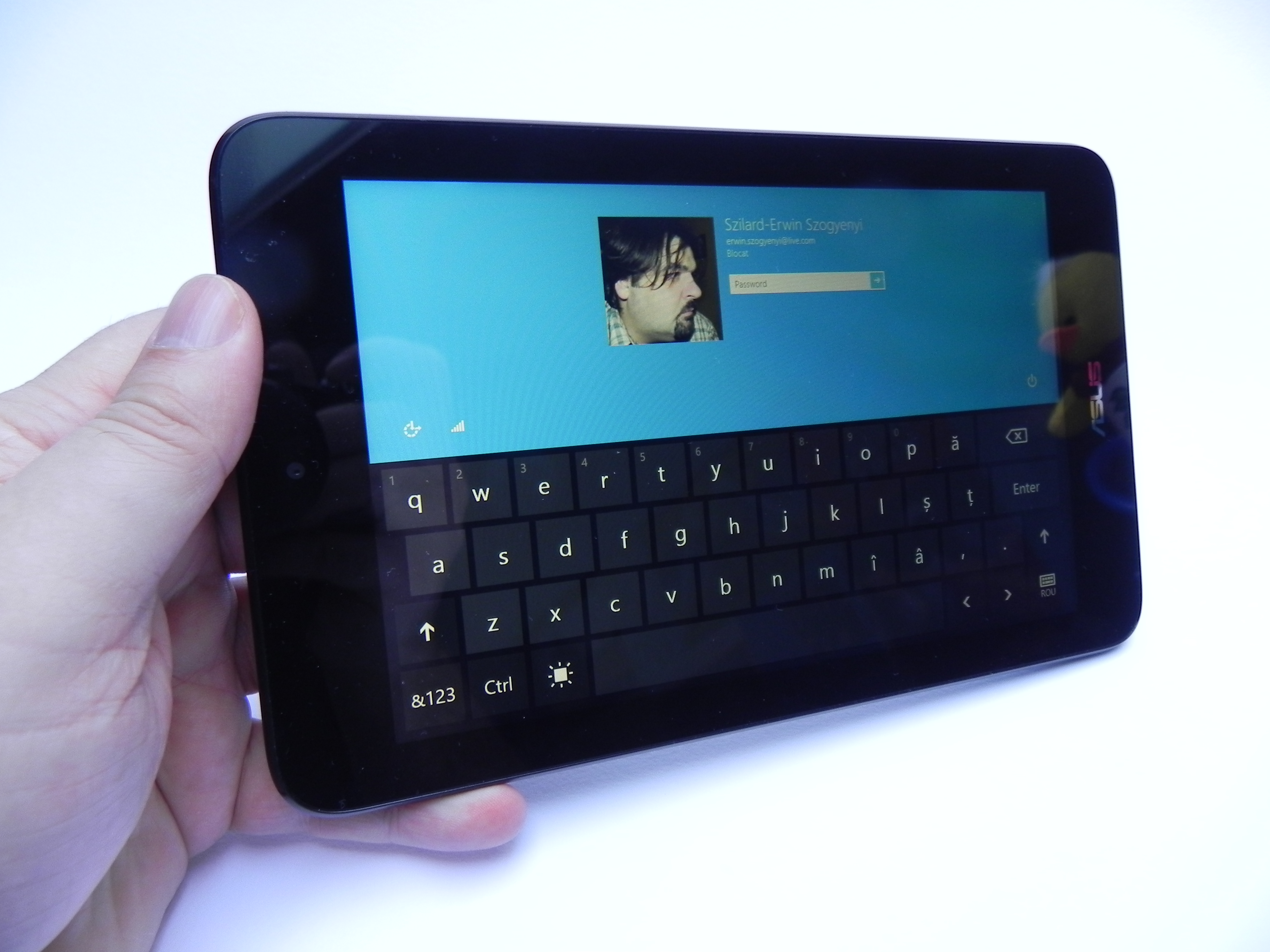 ASUS VivoTab Note 8 is a bit of a premiere, here at Tablet-News.com, since it’s our first Windows 8.1 8 inch tablet. Announced at CES 2014, the slate saw the light of day in January and it’s priced at a bit over $300 in USA. The design is bulky and massive and the product measures 11 mm in thickness. 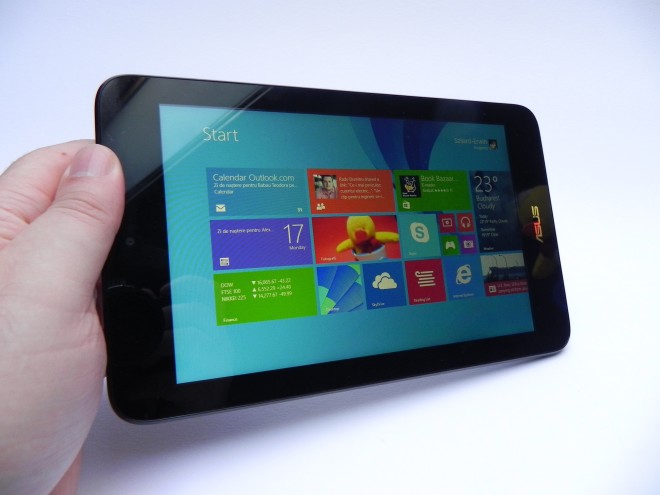 It weighs 380 grams and it offers a pretty good grip. We’ve got a soft touch back in the mix and big bezels upfront. The tablet features a shiny plastic ring around its body, that feels kind of useless. At the top of the device there’s a microUSB port and audio jack, while on the right there’s the On/Off button and volume buttons.

On the left side there’s the microSD card slot and Home button, while in the lower right we find the stylus slot. Upfront we’ve got a camera and at the back the main camera and speakers. The slate has rounded corners and its screen gets dirty easily, actually way more dirty than it should. Overall, the design feels a bit antique and a bit unappealing. 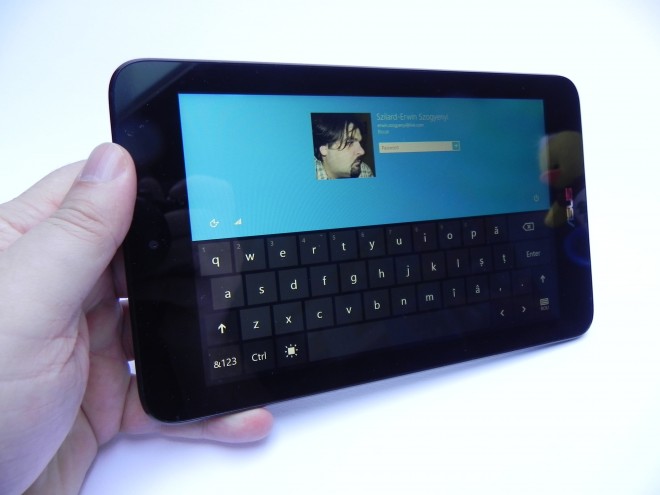 Moving on to the hardware, this is where we find an 8 inch IPS LCD screen with LED backlight and 1280 x 800 pixel resolution, an Intel Atom Z3740 quad core 1.86 GHz processor and 2 GB of LPDDR3 RAM. On the graphics side there’s Intel HD Graphics with DirectX 11 support and storage wise we get 32 or 64 GB. MicroSD is also here, plus WiFi, Bluetooth 4.0, Miracast and a 5 MP back camera.

Upfront there’s a 1.2 MP shooter and at the back there is a bunch of stereo speakers. Specs also include a G Sensor, ambient light sensor, gyroscope, e compass and a 15.5 Wh battery. The battery offered us 8 hours and 40 minutes of HD video playback with WiFi on and brightness at 50%. This is not very impressive compared to the iPads, but at least it’s more than the LG G Pad 8.3 and the Nexus 7 2013, so that’s got to count for something. 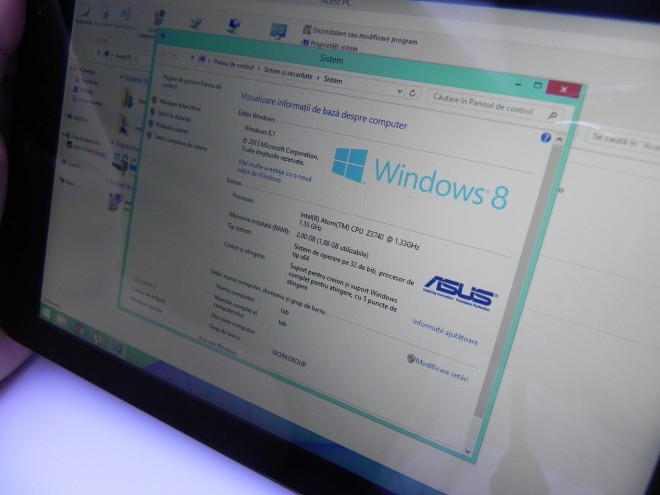 The charge time is OK, at 2 hours and 40 minutes. Overall you should get a day of moderate use out of this piece of gear. As far as the acoustics go, the speakers give you a warm voice, lots of vibration at the back and a pretty good volume. Bang & Olufsen supplies SonicMaster technology here and overall we’ve got pretty good speakers, with good bass too.

The display here is an 8 inch IPS LCD, with 1280 x 800 pixel resolution and RGB Stripe pixels. Viewing angles are wide, but the colors are not that vivid and sunlight use is very poor. The brightness level is only 265 LUX units, which is about 50% of the Nexus 7 2013 brightness, so that’s pretty poor too. Overall, this is a mediocre screen, that’s clearly the biggest sacrifice ASUS made to keep the slate cheap. 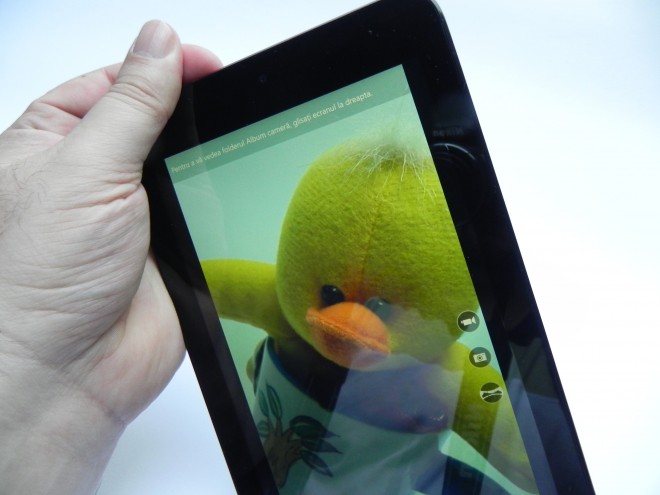 Moving on to the back camera, this 5 megapixel unit has no flash and comes with the most basic of options. Those include photo and video capture, 360 degree panorama, timer, exposure and such. The pictures taken with it are a bit noisy, but they have good colors. They aren’t very crisp and they’re totally below the quality of the shots taken with the Nexus 7 2013 or the iPad Mini 1 even.

Filming is done in Full HD at 29 FPS, with 21 Mbps bitrate and stereo audio, so at least there’s that. Stabilization is not OK, but the quality of the footage is what I would call decent. Moving into performance territory we find the device’s temperature to be 43 degrees Celsius after 15 minutes of playing Asphalt 8, which means the ASUS VivoTab Note 8 suffers from overheating.

We also tried some benchmarks on this product and I should probably mention why I compared it to the ASUS Transformer Book T100: they have the same Bay Trail 4 core processor, the Intel Atom Z3740, clocked at different speeds. In PC Bench, the Note 8 scored 43/114 Mbps in the read/write test, while the T100 got 43/142 Mbps so the difference is rather small. The T100 RAM score was 710+, while the Note 8 was close at 695. 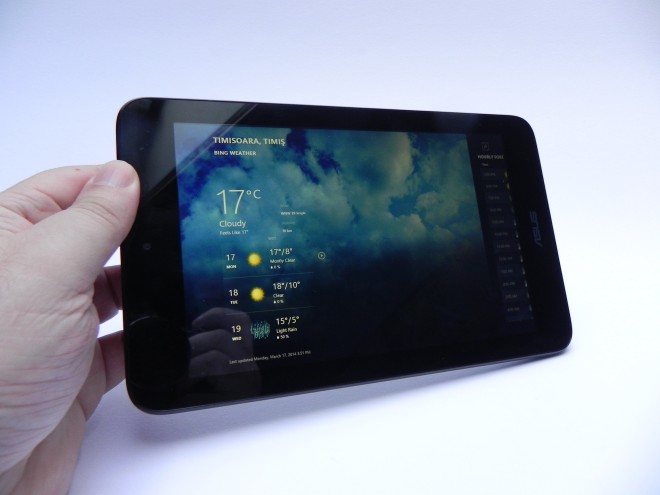 Overall, I’d say the benchmarks are looking OK, especially the graphics ones. The OS here is Wndows 8.1, that features the functions you already know, like the multitask via snapping apps side by side, the series of gestures used to control apps and the list of apps that’s triggered with a different gesture than in Windows 8. There’s an universal search function now and a Start button, too. 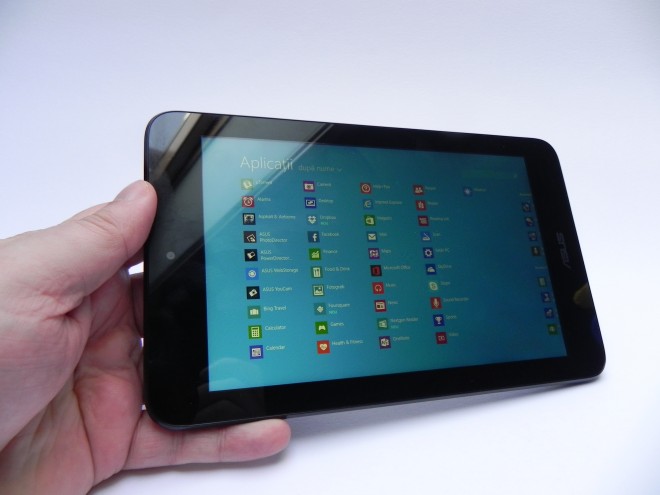 We dedicated a special part of the review to the Wacom stylus. This one works at a height of 20 mm from the screen tablet and it has great palm rejection. In the video review you can watch a demo of Paint and Sticky Notes, as well as One Note with the stylus. It allows you to take notes on PDFs that support it and highlight text in IE.

There’s a button on the stylus, that serves the role of the mouse right click. The stylus supports over 1000 pressure levels and one of its good uses is pressing the smaller stuff on the screen, especially in lists and menus. Moving on to web browsing, IE 11 is very fast and very intuitive, even for novel uses. 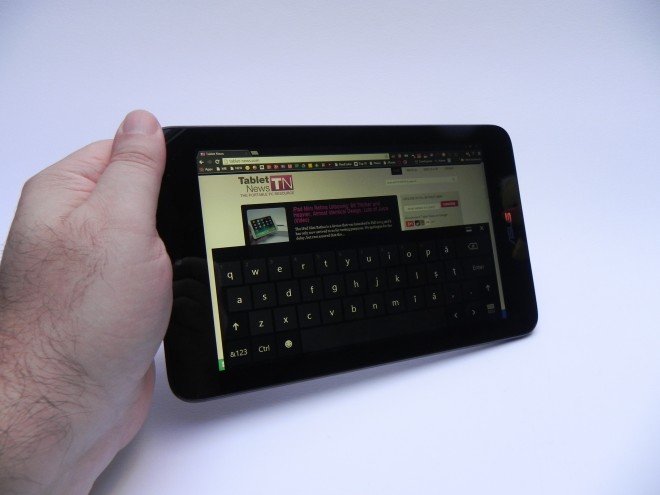 The tablet also comes with Connected Standby, which is a lower power mode, that allows the device to last for days, while Windows Store apps stay active and connected. The tablet has a GPS as far as I know and you should know that this product comes with Microsoft Office Home and Student license bundled. The preinstalled apps list includes ASUS PowerDirector, that allows you to do video editing, ASUS Photo Director, that allows you to edit pics and YouCam, that’s basically for selfies with a few options.

There’s ASUS WebStorage included here, Maps and the whole Bing suite. We also installed Sketchbook for the sake of the stylus demo and I have to say it’s a boon for amateur designers and drawers. There’s also Skype and OneDrive in the mix, just so you know. And now off to the verdict, to the Pros and Cons.

We give this tablet a 7.5 out of 10 for design, an 8.7 for hardware and an 8 for OS and UI. Windows 8.1’s confusion between desktop and Metro has no place on an 8 incher and that’s fully felt by the users. The final grade is 8.06 out of 10 and this feels like a product good for people who draw and students. You can buy the tablet from Amazon. 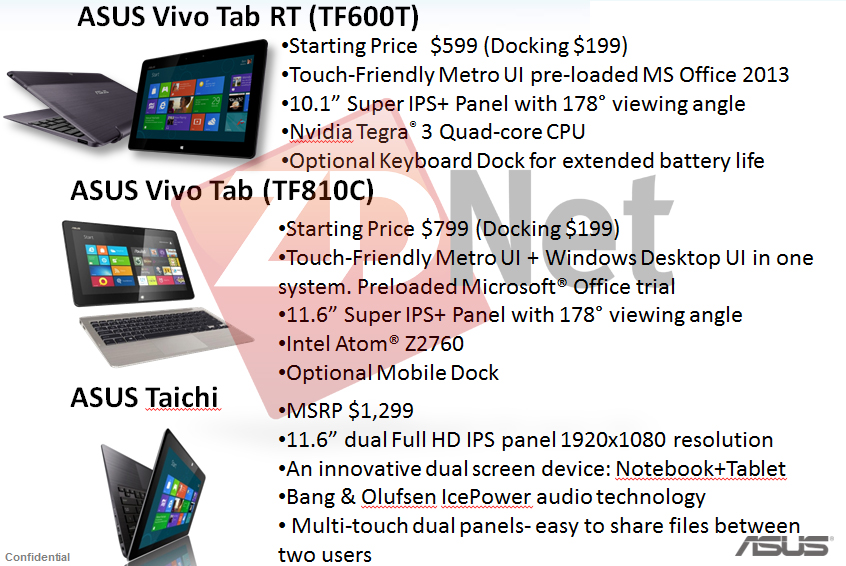