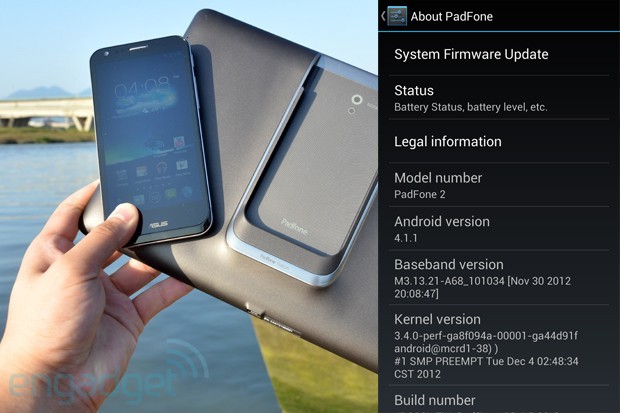 Although we’re testing a PadFone 2 right now, we haven’t received the OTA update to Jelly Bean. However, that has been happening in Asia, as confirmed for the folks of Engadget by one of their readers. Taiwan has priority and it appears that the rollout will bring the software to other areas of the world soon.

The PadFone 2 is a great device and we’ve already scored close to 8000 points in Quadrant and 20k in AnTuTu, so who knows what crazy scores we can get once the JB update arrives. Android 4.1 is sent over the air, as we said and be sure to check the system update area every once in a while till it appears. Reasons to be happy? Project Butter and its speed, plus an amplified notification area and general updates to all the apps on board.

I have to make a confession here: since I’m testing the PadFone 2 right now I’m totally underwhelmed by its camera, that could have been much better… It’s a 13 megapixel sensor that promises great results and I can’t help but think I’m dealing with a prototype, since the pics I’ve seen elsewhere were great. Do you know anything about that?

GPD Win 2 Prototype is a Pocket Gaming Console, That Just...