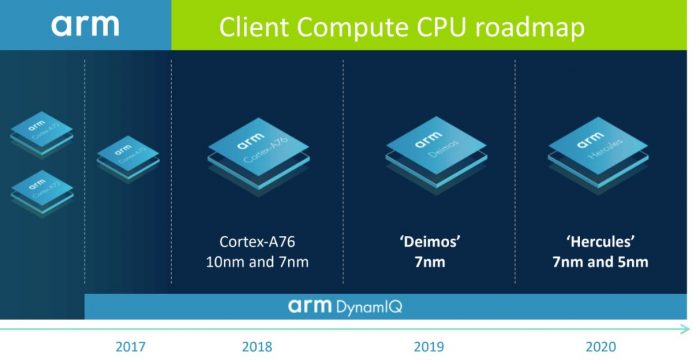 As Intel gets ready for its own GPUs and graphics cards in 2020, ARM is making a statement, by announcing new CPUs. These are the Deimos and Hercules CPUs, that will be meant for laptops and other powerful machines.

Lately we’ve seen Snapdragons on laptops, powering Windows 10 and working fine, albeit not as powerful as Intel CPUs. ARM wants to fix that, by putting out a “client computing CPU roadmap” for the next few years. It’s important to mention that ARM doesn’t make its own CPUs, but rather it licenses chip designs to bigshots like Qualcomm, Samsung, Apple or NVIDIA even.

Even AMD could borrow from these designs and they’ve actually done that a few times. However, most times Intel and AMD CPUs are based on x86 architecture, which usually beats ARM solutions. ARM now claims that the Cortex A76 architecture can fight an Intel Core i5-7300U on equal terms, while also using less power. A new Deimos CPU with 7 nm tech will debut next year, with a 15% performance bump.

Also in 2019, but later we’ll see a Hercules arhitecture with a 10% increase in efficiency. Deimos chips will be made using 7 nm tech, while Hercules ones will go into 5 nm territory. Such chips will give birth to new fanless laptops, with skinny designs and long battery life. Integrated graphics and even cellular connectivity will be in the mix. Intel also has its worn lower power CPUs and we’re talking about Gemini Lake, Pentiums and Core Y series.

Battery life will probably be key for most users and let’s not forget about the AMD Ryzens.