Archos is a name you usually associate with tablets, but now apparently they’re making something else, something unique, maybe even a gaming console, as rumors go. A model called Archos Ludo G10 was spotted in GLBenchmark and rumors say it could be a gaming console based on Android 4.0 ICS.

It seems logical that Archos would attack another niche, after handling the budget tablet area reasonably good. Lugo G10 is shown as featuring a display with a 1920 x 1008 pixel resolution, but that could be a spelling error, since a normal resolution is 1920 x 1080 pixels. The CPU of the device is supposed to be something special, a brand new dual core TI OMAP 4470 chipset, unreleased just yet. It’s supposed to come out in Q4 2012 and it’s clocked at 1.8 GHz.

It also has the crazy good PowerVR SGX554 GPU, that will provide users with a great gaming experience. Ludo G10 runs Android 4.0.4 out of the box and with all the data gathered I can say that this could be the first mainstream and big brand Android videogame console. There’s also the Ouya out there, but that will take a while to get to the finishing line. Now let’s see the price! 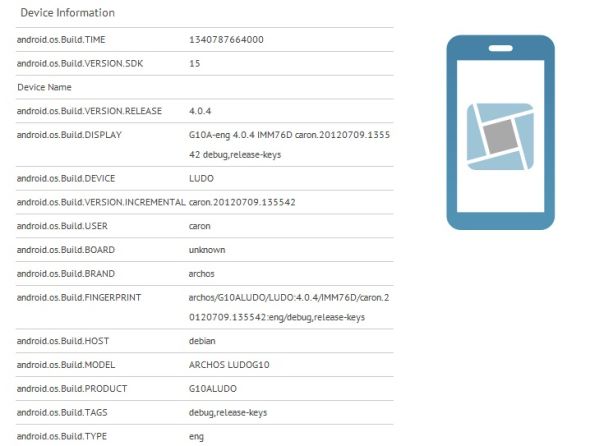