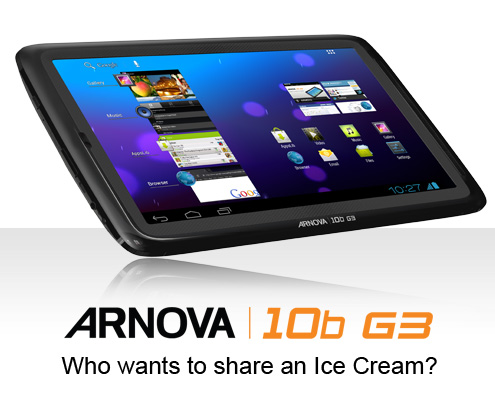 Archos has posted some product details for two of the new Arnova G3 tablets it prepared. I’m talking about the Arnova 10b G3 and Arnova 9 G3 and right now retailer Adorama is taking orders for the bigger unit, the 10 inch one. Arnova is a series of budget tablets from Archos, just so you know.

Arnova 10b G3 will sell for around $200 and it comes with a 10.1 inch 1024 x 600 pixel screen, a 1GHz chipset of the ARM Cortex A8 kind, plus 1GB of RAM and support for 1080p HD video playback. Android 4.0 ICS is the OS of choice here and this is certainly no top of the line tablet, I’ll give you that. The device ships with 4GB or 8GB of storage and comes with a resistive touchscreen display with support for two finger touch input. The product measures 0.5 inch in thickness, weighs around 1.4 pounds and moving on to the Arnova 9 G3, this model is also an Android 4.0 slate, but smaller.