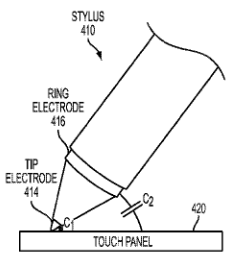 Apple had recently obtained  a new patent, this time for a device called iPen . This device makes much more than only drawing on the screen , it can be called a real smart stylus.

U.S. Patent and Trademark Office granted Apple a new patent for an application called “Stylus orientation detection”.We can see more about the orientation of a stylus on a contact surface . The device in the sketch above comes with a sensor that can determine the direction and type of scribble on a screen.

Using this information , the stylus produces a design line similar as an orientation in real life . That means that if a person draws straight-on, the pen’s drawing will look different than if they were using the side of the pen’s tip. We expect to see a device like this on the market soon.