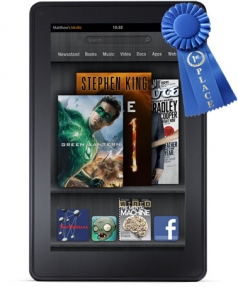 mazon Kindle Fire deserves its name, since it’s a very hot item, one that’s burning when it comes to sales, at least on BestBuy.com. The device has become the retailer’s best selling tablet online, ahead of the iPad. The slate has been on Amazon’s best seller list for weeks now and even before the product shipped.

The $199 tablet has surpassed the iPad in many retailer locations and websites, so Apple has reasons to be worried right now. Is Amazon winning the Android tablet wars? It’s hard to say in this period of Black Fridays, Cyber Mondays and Xmas coming soon…. We’ll only be able to draw some conclusions supported by figures in January next year. Last I heard, Amazon was announcing that it has moved 4 times more Kindles than last year, without providing real numbers for this achievement.

The price is the one that saves the product, otherwise buggy and flawed… What we have is a slate inside a cheap-looking cardboard box, with mediocre specs, no 3G, no camera, no volume buttons, no GPS and a mere 8GB of storage. The cloud is the appeal here and the customized Amazon experience on top of Android 2.3. Some people are porting Android ICS to the device as we speak, so imagine the joy then!