The Xiaomi Mi Pad is a tablet that’s on everyone’s lips these days, but if you truly start browsing the web, you’ll notice there’s no huge review about it, filled with all the small details everyone wants to know. Well, we at Tablet-news.com took it upon ourselves to create said review. The result can be seen below. 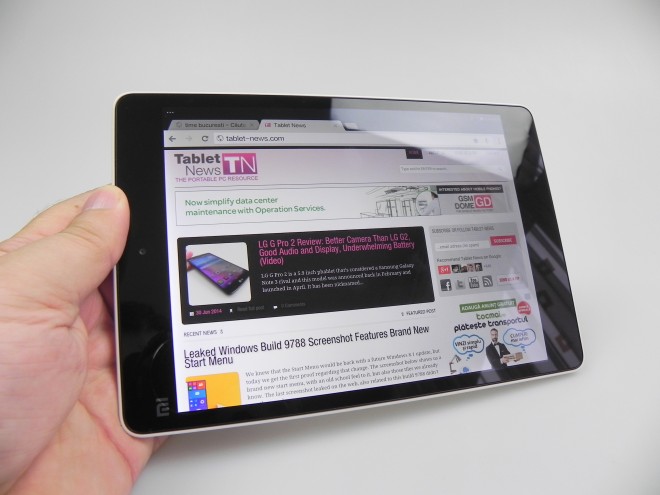 The slate is a 7.9 inch model with a Tegra K1 processor and it was launched in stores (online) on July 1st 2014. It sold 50k units in less than 4 minutes on the same day and in China it goes for $240. We bought it from Italian retailer Xiaomishop.it for 300 euros, plus a 14 euro fee for delivery in Europe. In the meantime the 64 GB version of the device debuted and we only got to buy the 16 GB model.

The product is a hit already, that’s for sure, so let’s analyze it. The tablet has an iPad Mini format and it uses a polycarbonate glossy case, that’s pretty slippery, but that can be solved with the proper case. The tablet comes in blue, green, yellow, pink, white or gray and it measures 8.5 mm in thickness. It weighs 360 grams, which is 30 grams heavier than the iPad Mini Retina. The rest of the sizes are pretty much the same as the ones of the iPad Mini. 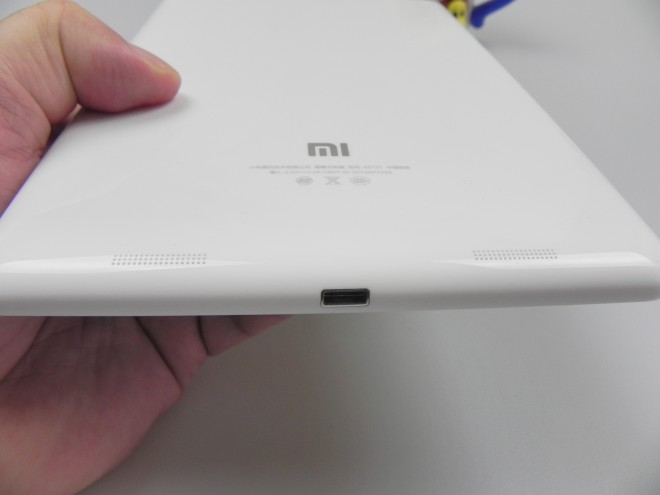 The grip is decent and we’ve got a good build here. The bezels are a bit big for modern standards, but we’ll live with that. Upfront we’ve got the selfie camera and display, plus the logo and notification LED at the top. There are capacitive buttons at the bottom, much more stylish ones than we’re used to on Android. At the back there’s the main camera, plus two microphones and two speakers at the bottom.

At the top there’s an audio jack, while at the bottom there’s a microUSB port. On the right side we’ve got volume buttons and On/Off buttons, that are comfy and offer good feedback. On the left there’s a microSD card slot, that can be pulled out as a tray using a metal key. The back of the Mi Pad uses anti fingerprint coating, but the front is pretty prone to fingerprints. The design is pretty OK and premium for a plastic tablet. 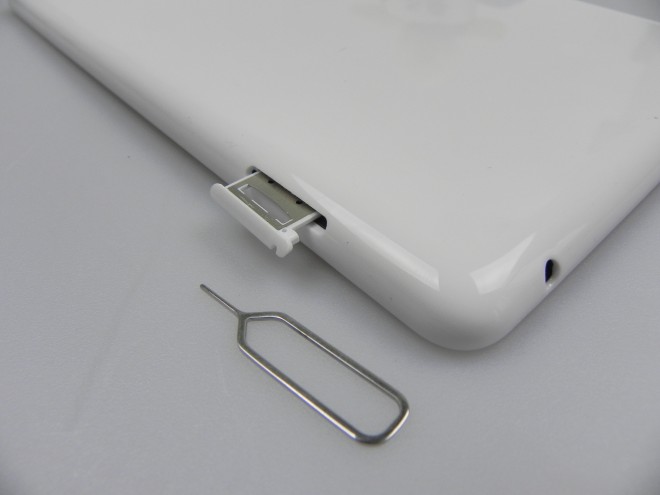 As far as hardware is concerned, the Xiaomi Mi Pad features a 7.9 inch IPS LCD display with a 2048 x 1536 pixel resolution and 326 ppi density. This screen comes with OGS tech and it can be used with gloves on. The CPU inside the slate is a quad core Nvidia Tegra K1 clocked at 2.2 GHz, with a Kepler 192 core GPU. Mi Pad integrates 2 GB of RAM (LPDDR3), 16 or 64 GB of storage, a microSD card slot with support for up to 128 GB of extra storage and an 8 megapixel camera with Sony sensor at the back, plus a front 5 MP shooter.

On the connectivity side there’s WiFi, WiFi Direct, Bluetooth 4.0 and we have no GPS on this tablet. There’s a gyroscope, light sensor, a proximity sensor and compass on board, as well as a Li-Ion 6700 mAh battery, that offers about 86 hours of music playback on paper at least. Our test with brightness at 50% and WiFi on involves playing back a video loop till the battery runs out. We achieved 10 hours of battery life in this mode, which is very OK. By the way, the iPad Mini Retina reaches the same time of video playback, so we’re doing very well. We also beat another popular Android tablet, the LG G Pad 8.3, that only gets to 7 hours and 40 minutes of playback. 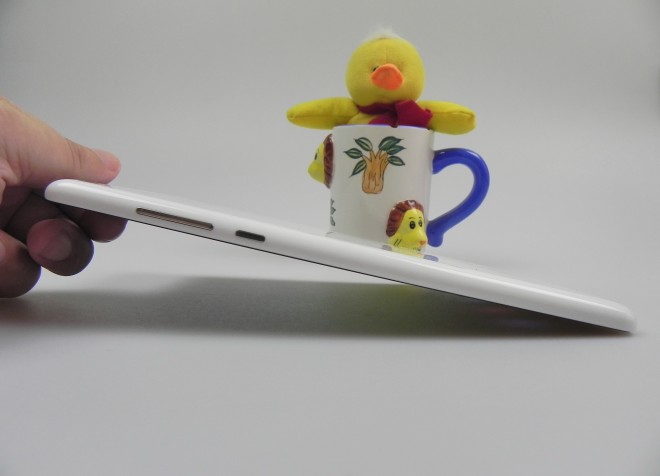 The charging takes 2 hours and a half, which is pretty good, considering an iPad Mini Retina needs 3 hours and 40 minutes for charging. There’s no exact power saving mode, but you can go to Settings and Battery and choose one of the three functioning modes: High Performance, Balanced and Battery Save. Overall, the battery on this tablet is very good and now let’s move on to the acoustics. We’ve got two speakers at the lower back area and the MIUI music player bundled on the slate looks pretty nice, being minimalistic and all, but I regret the lack of an EQ. The player also integrates the Baidu music store, as shown in the video review.

The speakers offer a loud and clear sound, very good bass and it’s superior to the iPad Mini and iPad Mini Retina in the acoustic area. The sound is crisp and voice is warm on this tablet, but we also measured the decibel level to be sure. We achieved 83.3 dBA at the front of the device and 84.2 at the back. I’d say we’re doing well, seeing how the flagship phone LG G3 got 87 dBA in a similar test. As far as the screen goes, this is a 7.9 inch IPS LCD with Retina level display, vivid colors and wide view angles. The video player is minimalistic and the tablet played pretty much all the files that we tried out.

The screen is pretty bright, the image is crisp and I’m liking the whole high resolution thing. The pixels are of the RGB Stripes kind and this panel behaves well in sunlight. We also tested it with a Luxmeter and we achieved 310 lux units, which is not that impressive compared to the 500 lux of the Nexus 7 2013 or the 412 lux of the iPad Mini Retina. At least we beat the LG G Pad 8.3 and it’s 260 lux, right?

Overall, the screen could be brighter, but you won’t feel the lack of extra lux in regular use. As far as the camera goes, we get a Sony CMOS 8 MP sensor, while the front camera is a pretty good selfie shooter with 5 MP res and F/2.0 aperture. The camera UI is minimalistic, perhaps even more than the iPad’s and we basically have no detailed options for capture. It takes a while to focus properly, but the pictures are taken fast. On the left side of the UI there’s a shortcut to the front camera, audio on/off and beauty options, with 4 levels of smoothing. You can also apply effects to the image, like blur, mono, vivid, fisheye, indigo, sketch, mosaic and more. 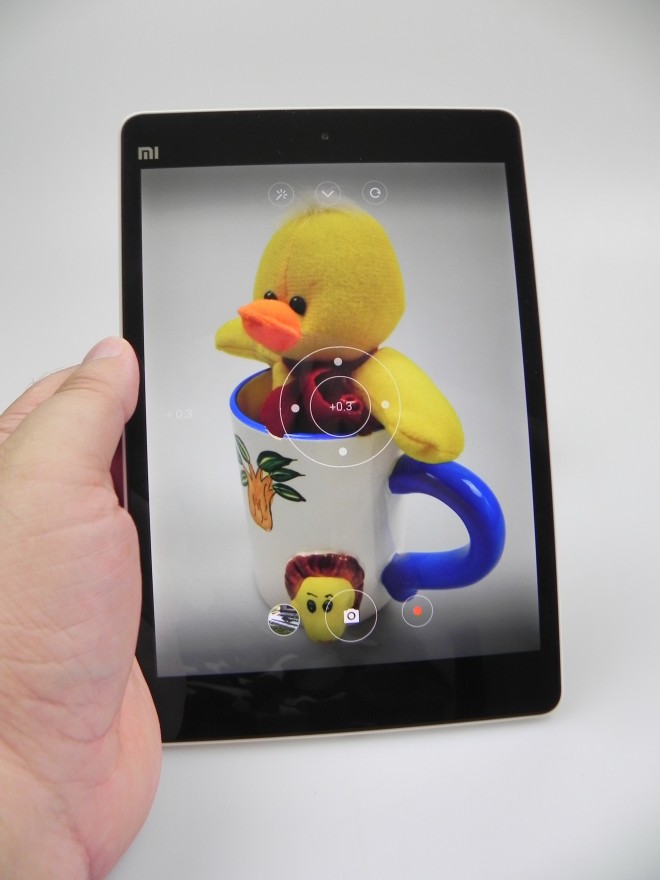 The tablet offers 4X zoom and both cameras do Full HD 30 FPS video capture. As far as the actual pictures I’ve taken are concerned, we’ve got crisp images, good white balance, fast face detection and realistic colors. Focus loss happens sometimes and the quality is pretty much on par with the one of the iPad Minis. Sadly, the video capture is not that good, especially since the image quality diminishes when zooming in. At least the tablet films in MP4 format, not some 3GPP low bitrate format. There’s focus loss when filming and in this aspect, the tablet is certainly not on par with the iPads.

Overall, the image capture on this model is OK for a tablet and if you know how and when to focus you’ll be happy with it. The selfie camera is also very good, so overall the cameras do a fine job. You can also edit the pictures you take using the usual options, like crop, rotate, doodle, red eye, sharpen, contrast etc. Now we move on to the performance analysis and I must say that the tablet reaches 45.7 degrees Celsius, so games trigger a bit of overheating, especially the higher end ones. The tablet’s web browser is fast and the sites look very crisp on the high res screen. 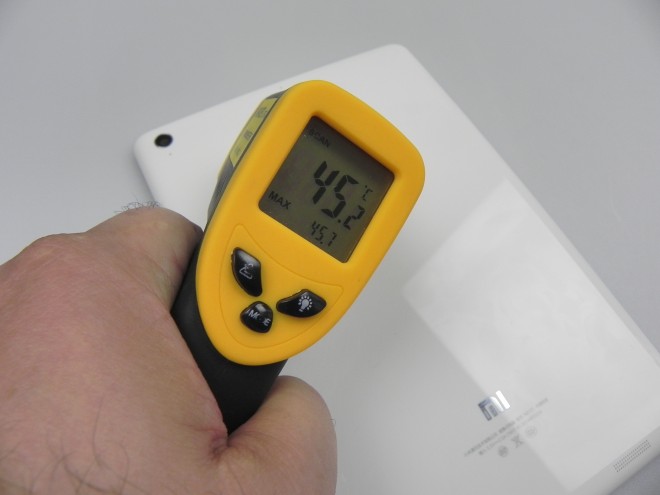 The keyboard is comfy and well spaced, although there’s the occasional blunder with Chinese characters. As far as the benchmarks go, I compared this model to the iPad Mini Retina and its 64 bit processor and the Galaxy Note Pro 12.2, in spite of the diagonal difference. The Note Pro 12.2 has an Exynos 5 Octa octa core processor, a high end CPU, that’s why it made our comparison here.

Overall, I’d say say this model beats its rivals in the tests we did and sadly some benchmarks I really liked to try don’t work: Quadrant, GeekBench 3 and BrowserMark 2.1. It’s probably the fault of the Tegra K1. We also measured how long it takes for the device to shut down (15 seconds) and how long it takes for it to boot (29 seconds). The iPad Mini Retina boots in 20 seconds, for comparison sake.

Xiaomi Mi Pad runs Android 4.4.2 with MIUI v5 on top, with a clean and minimalistic UI. There’s no separate app zone and apps are shown on the homescreen, while widgets get their dedicated homescreens. Some of the widgets don’t work, like the ES Task Killer and Gallery to name two. You swipe up to unlock the device and pinch the homescreen to trigger its options. Toggles and shortcuts can also be integrated on the homescreen. The dock area features basic apps, like Gallery, Music and Video and it’s customizable. The dropdown area is very minimalistic and features both notifications and the usual connectivity and functioning toggles, plus a screenshot button.

The Settings area reminds me of the iPad’s similar section, being clean and very well organized. A nifty option is the one allowing you to see the speed of the connection at all time. You can also change the layout of the notification area, tweak security options (pattern unlock) and assign features to the long press of the capacitive buttons. For example a long press of the Back button in the lockscreen triggers the camera.

The preinstalled apps list is not much here, including the likes of Calendar, Notes, Games, Market, MiCloud, Calculator and Explorer, all of them coming with MIUI. As you know, Google Play and Google apps are not installed, so I’d recommend the tutorial we did here to get them on the device. I must also mention that although the slate’s UI is in English, parts of it are in Chinese or in poorly written English.

The slate has no lag, but it misses the occasional frame between homescreens. You may get rid of some of the problems by playing with the Nova Launcher, as we did at the end of the review, especially now that it has some Android L features included. And now the verdict! Let’s see the pros and cons of the Xiaomi Mi Pad.

Keep in mind this is a tablet we liked very much and I myself am an iPad Mini owner considering the switch to a Mini Retina. This model had me in doubt, that’s why it gets a 9.1 out of 10 for design, a 10 for hardware, 9 for OS and UI and a special 10 for price. Making an average, we get a 9.52 out of 10 and this becomes the Tablet of the Year 2014 so far. It’s a great device, but the iPad Mini Retina has some extras you can’t miss (no overheating, better filming, games come earlier, better screen). However, if you must have Android and you want a lower price, the Mi Pad is the device to get.