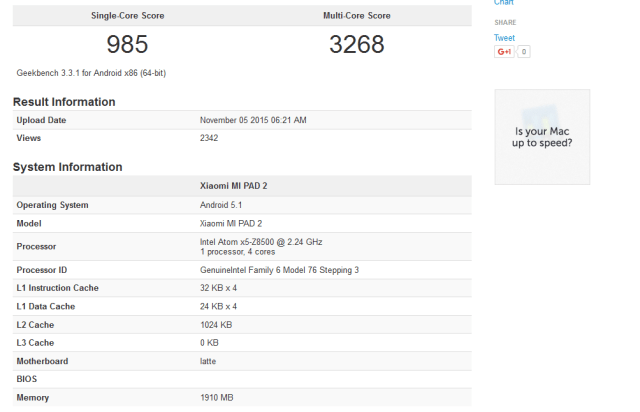 Among the tablets reviewed last year here on Tablet-News, we also had the Xiaomi Mi Pad, device that arrived with a great audio quality, amazing display and also with a good camera. As rumored from some while now, the Chinese company is currently working on a successor for this device, product that was recently spotted in GeekBench database.

According to the data from the screenshot above, this new tablet called Xiaomi Mi Pad 2 comes in the package with an Intel Atom X5-Z8500 processor, a quad-core unit on 64-bit clocked at 2.24 GHz. There’s 2 GB of RAM memory and Android 5.1 Lollipop pre-installed along side Xiaomi’s custom interface called MIUI.

We notice that this device gets 985 points in the single-core test, and 3268 points at the multi-core one. A thing you should know is the fact that the processor found inside this tablet offers support for Quad HD panels, so we might see such a resolution on the new Mi Pad.

Xiaomi NextClass.ai NX1 is a Learning Tablet With a 15.6 inch...