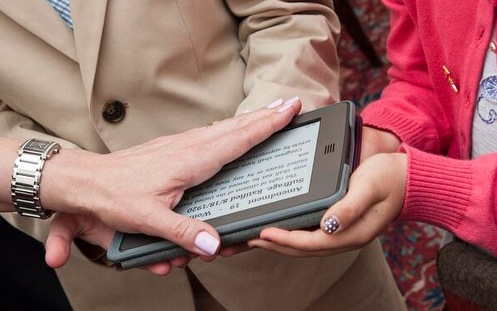 Yes folks, it has come to this! After seeing firefighters swearing their oath on a tablet, things have moved up the ladder and now an US ambassador was sworn in using a Kindle. Suzi LeVine is the official in question, becoming the first US ambassador to take the oath this way.

She represents the interests of the US in Switzerland and the oath was taken on a digital copy of the US Constitution stored on a Kindle Touch. Previously, New Jersey firefighters swore on an iPad edition of the Bible, because nobody could find a paper one nearby. I’ll tell you exactly what this means: we’re basically 10 years away from everyone forgetting how to write by hand.

With paper gone, trees will be saved, but our memory will be worse than ever. Do me a favor: read a paper book and try to memorize stuff from it and then read a digital one. Which one sticks with you the most? It may be the way we’re wired, or simply the brain’s ability to remember stuff from a glass screen is bad. Will we give up paper books alltogether?