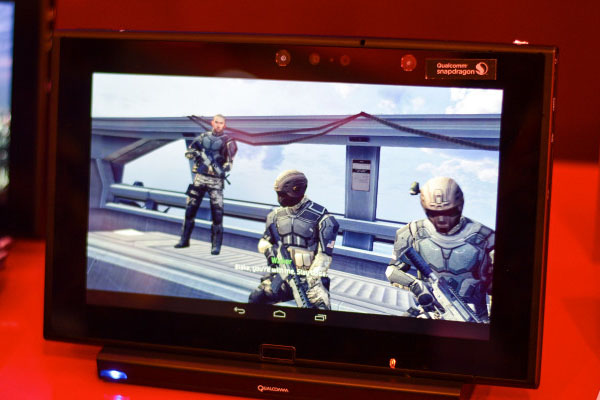 This week’s big tech event was GDC 2014, the Game Developers Conference in San Francisco. Obviously, mobile devices were also there to showcase the power of the latest CPUs, that will turn slates into console rivals. Below you can see a Snapdragon 805 reference design tablet demoed with Unreal Engine 4 on board.

The Adreno 420 GPU is actually being tested here and the graphics look spectacular on it. Snapdragon 805 fully supports Unreal Engine 4 and 4K video streaming. The aim of Nvidia and Qualcomm is to finally give us an alternative to the PS3 and Xbox 360 graphics on mobile. The Snapdragon 805 solution seems to generate impressive graphics, but we’ll have to wait for finalized devices to truly be impressed by it.

The Adreno 420 brings a 40% performance enhancement compared to the Adreno 330 predecessor and adds support for D3D-11 classes and OpenCL 1.2 API. Tessellation is also supported, improving the graphics level in a game, particularly one that uses a lot of polygons. New tablets with Snapdragon 805 CPUs will be able to integrate Ultra HD screens and also mini HDMI 1.4 or 2.0 ports.