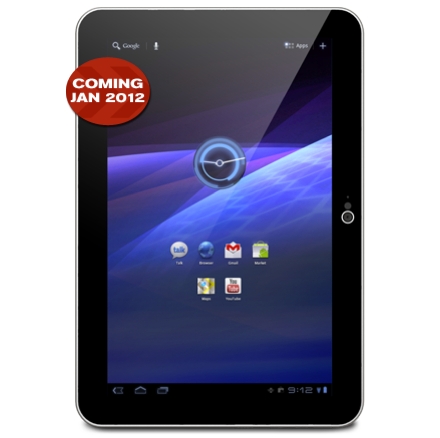 Toshiba AT200 is a tablet that was announced back in September and it quickly gained popularity, since it was the world’s thinnest tablet and took pride in that. Now we also have a launch time frame, at least for Canada: early 2012. Here’s the device I’m talking about:

Toshiba Canada’s website claims that this product will be called Toshiba Excite and it will be out in January. However, the guys of Mobile Syrup confirmed the launch for February, without mentioning a price tag. This slate is a mere 7.7mm thick, it runs Android 3.2 Honeycomb and it packs a 10.1 inch display with 1280 x 800 pixel resolution. There’s also WiFi on board, as well as Bluetooth 2,1 and a 1.2GHz dual core TI OMAP 4430 processor.

There’s also a 5 megapixel camera available at the rear, a 2 megapixel camera upfront, plus mini USB 2.0 connectivity and a microSD card slot also makes its way on board. Add to that 16GB/32GB of internal memory and you’ve got the whole picture. Excite A200 is the second Android slate from Toshiba coming to Canada, following the failure called Toshiba Thrive.

Huawei PhoPad Could be unveiled at CES 2014, Adopting an Unusual...