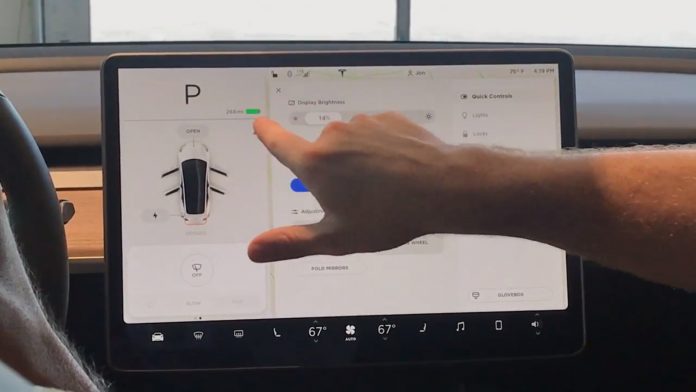 Even though the production of Tesla Model 3 vehicles has already started this summer, we’ve yet to see a detailed analysis of all of the car’s features. For example the touchscreen control “tablet” on board remains a bit of a mystery, but a freshly surfaced video sure helps with figuring out what’s new and what it actually does.

The interface helps with driving, includes maps and shows basically all the info about the car, telemetry included. It also lets you control all the tiny aspects about the vehicle, from the wiper speed, to climate controls and seats. Tesla decided to give up on the traditional dashboard cluster and put it ALL into a touchscreen tablet, including all the sensor and instrument readings.

This poses a problem, as it can distract the driver from the road, particularly at such a large diagonal. The UI seems rather intuitive, with all the main features spread into categories at the bottom of the screen. We’ve got local speed limits shown, music controls and so much more. This is the same screen interface seen on the Model X or Model S, so it’s not exactly breaking news here.

What’s new is that we also get essential driver info on the left side. Recent rumors have been talking about features strangely missing from the Tesla Model 3 panel, like the FM radio or audio streaming from smart devices, but future updates may fix those. The lack of audio streaming right now is surely a bummer and should be fixed soon.