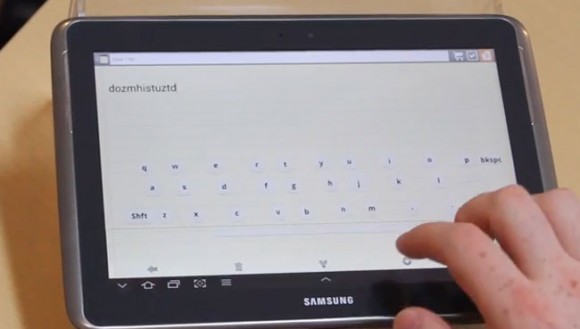 Swype co-founder Randy Marsden is at it again, with yet another revolutionary technology related to text input. This time it’s called Dryft and it’s shown in action below. This tech is meant to change the way we input text on a tablet.

The product was announced at TechCrunch Disrupt and the system recognizes where hands move while typing. It can shift the keys in real time while typing, so it compensates the drifting the hands to across the device. The nifty thing here is that the tracking is done with the aid of the accelerometer in a tablet, to establish where hands are moving or resting.

Marsden claims that this system can boost natural typing speed up to 80 words per minute and drastically decreases the number of errors. Dryft has already been patented and uses touch sensors in the slate and the accelerometer to differ from the user resting his hand and his typing. I’m sure we’ll see this idea evolve and turn into a hugely successful app, maybe one that will bundled with devices by OEMs.