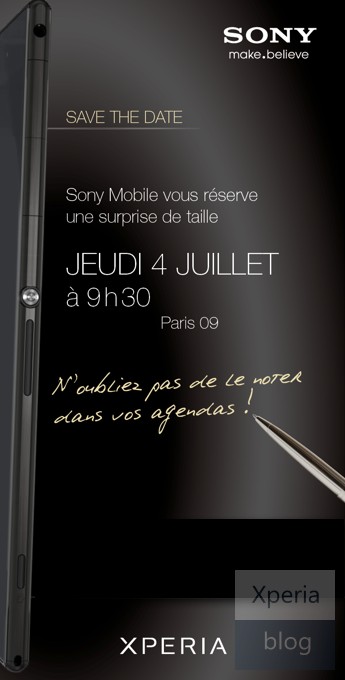 It appears that the 4th of July will be more than the US celebration this year, since Sony has a special event in France, meant to launch its very first phablet. Formerly known as the Xperia Togari, the device is now called Sony Xperia Z Ultra.

The press invite shows the device’s sides and a very slim profile, said to be merely 6.5 mm thick. The handset has a dedicated camera button and strangely enough there’s an audio jack on the side. The device is supposed to pack a 6.4 inch Full HD display, a Qualcomm Snapdragon 800 processor, 2 GB of RAM and 16 GB of expandable storage.

There should also be an 8 megapixel camera at the back and this phablet is expected to boot Android 4.2 Jelly Bean at launch. Just like the Xperia Z, this unit is said to be water resistant and it will support input from a stylus, since there’s a pen of sorts pictured in the invitation.

Huawei PhoPad Could be unveiled at CES 2014, Adopting an Unusual...