Over the past few days I had the chance of playing with a Huawei MatePad Pro tablet, which was announced in late 2019 and finally reached my part of Europe. This 10.8 inch tablet had some premieres back in the day, including wireless charging and a punch hole camera. It’s priced at around $500 right now and we also got to play with its M Pencil stylus and a keyboard, Huawei Smart Magnetic Keyboard, both sold separately. There’s an unboxing below and fist impressions as well.

This is clearly meant as a rival for both the iPad Pro and the Galaxy Tab S6, or even the upcoming Galaxy Tab S7. Inside the box of the tablet we found its charger, an USB-C cable and manual, plus a key used to access the slots. 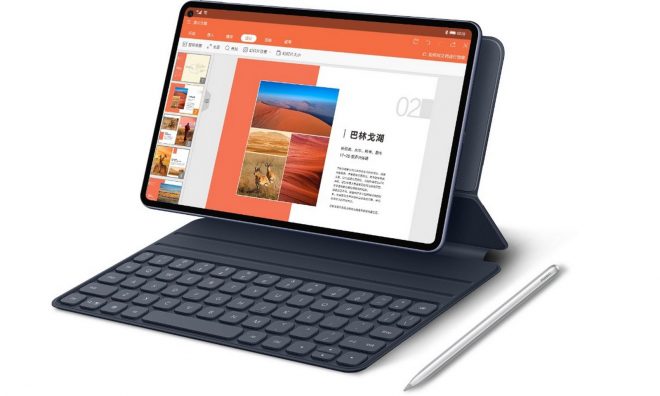 As far as the tablet premieres go, here are 4 trends inaugurated by this device:

Available in green and orange (faux leather), as well as grey and white, the device has a metal and glass body, that weighs just 460 grams. It also measures just 7.2 mm in thickness. Interestingly, from what I’ve been reading the back side is made of fiberglass deeply attached to a metal chassis. It allows the wireless charging to go through. Upfront we find a 10.8 inch IPS LCD display with a 2560 x 1600 pixel resolution and 16:10 aspect, as well as an 86.5% screen to body ratio.

On the CPU front we get a Kirin 990, accompanied by 6 or 8 GB of RAM, as well as 128, 256 or 512 GB of UFS 3.0 storage and a Nano Memory card slot. The battery on board is a 7250 mAh unit, that supports 40W fast charging, 15W wireless charging and 7.5W reverse wireless charging. The tablet packs quad speakers tuned by Harman Kardon and it’s very grippy and comfortable to use, but rather in landscape than portrait, being more wide-oriented.

It also jacks an audio jack, just so you know, plus any sort of fingerprint scanner. It relies on face unlock, but lacking an IR mechanism, it’s not that safe. Upfront we find an 8 megapixel camera in a punch hole, while at the back rests a 13 megapixel shooter with LED flash and 4K video capture. On the connectivity front there’s WiFi dual band, Bluetooth 5.0, USB-C 3.1, GPS, 4G LTE and even a 5G version out there. The OS here is Android 10 with EMUI 10, but with no trace of Google Services or Play Store. Huawei AppGallery has evolved a lot though.

As far as the accessories go, the Huawei M Pencil is a stylus shaped like a crayon made of metal. It attaches magnetically to the top of the tablet and it also charges like that. It hooks up via Bluetooth and lets you draw, underline, do handwriting (with recognition) or just navigate in the UI. Pretty comfy, but more angular than the rounded Apple Pencil.

We’re also testing a Keyboard/Cover accessory, that protects the tablet and also props it up, providing a keyboard. It protects the back and the screen, plus it offers a chiclet soft key keyboard, which is reasonably comfy for typing. Connection happens via Bluetooth and magnets are being used to prop up the device in a few special slots, at various angles. The combo of tablet + keyboard + pencil feels like a worthy iPad Pro rival after a few hours or use.

We’ll be back with a full review soon. You can get the device here.