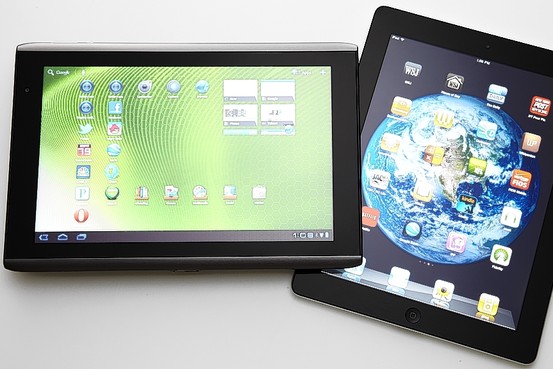 After seeing the ASUS Eee Pad Transformer looking like a very reasonable iPad rival, especially thanks to its price, another newcomer attacks the Apple dominance. This time we’re talking about the Acer Iconia Tab A500, pictured below.

This device costs a mere $449.99 in the WiFi version and it’s very solid alternative to the iPad 2. The unit runs Android 3.0 Honeycomb and it went on sale on April 24, with a new model supporting AT&T 4G meant for later release this summer. Right now, if you’re looking for a tablet, you’ll find the original iPad priced at $399, the WiFi Xoom at $599 and the G-Slate at $750 without contract.

There’s always the BlackBerry PlayBook, for $499, but that device requires a BlackBerry phone for email and contacts. Iconia Tab is a breath of fresh air, with its Tegra 2 dual core CPU, 16GB of storage, 10.1 inch display, dual cameras and appealing design. The battery life is also pretty good, at 8 hours, when you do gaming and video.

Will you accept Acer’s tempting offer?

Acer Preparing E-Readers, Shy to Announce Them for Now