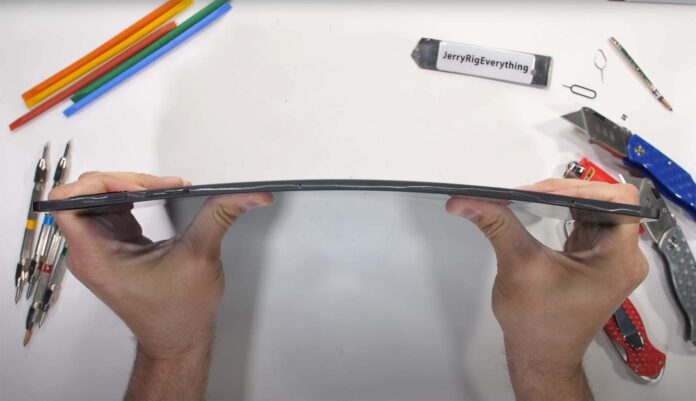 We’re accustomed to seeing bend tests involving smartphones, but today it’s a tablet that’s being put to the test by JerryRigEverything. It’s the new flagship tablet Samsung Galaxy Tab S8 Ultra, which is dangerously slim, at 5.5 mm in thickness.

It has a massive 14.6 inch screen and it’s made of metal, so that should guarantee some resilience. Aside from the bend test, we also get a screen resilience test. The panel scratches at a level 6 on the Mohrs hardness scale. There’s also an in display fingerprint scanner, which doesn’t work as well after some serious scratches. The device’s sides and back are made of metal and produce a cringe-inducing noise when scratched with a cutter.

The YouTuber also found that the larger S-Pen bundled with the tablet has the same internal hardware as the S-Pen that comes with the S22 Ultra. The tester even scratches a drawing of a T-Rex on the back side. We also get the heat test, with a lighter on the AMOLED screen, leaving quite the mark on the 2K+ display. After about 25 seconds the damage remains visible… for good, as the adhesive gets melted and triggers a green spot.

The bend test leaves the Tab S8 Ultra in one piece, with zero structural damage and creaks. Jerry is quite the large fellow, a former military man with big biceps and still he couldn’t crack it. It could be the new Armor aluminum to “blame”f or this performance.

Samsung Notebook 9 Pro Ready for Sale This Month, Priced Up...