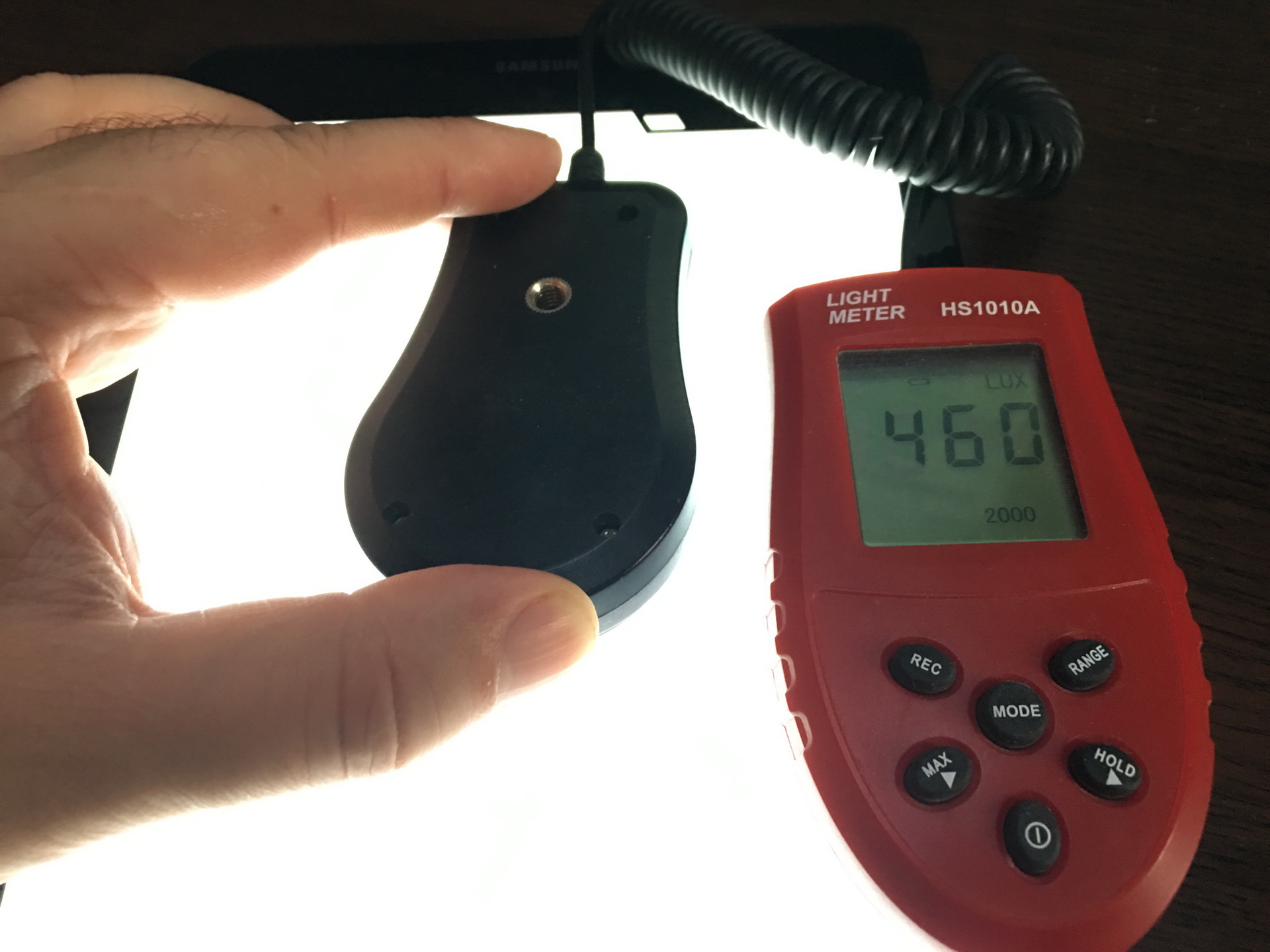 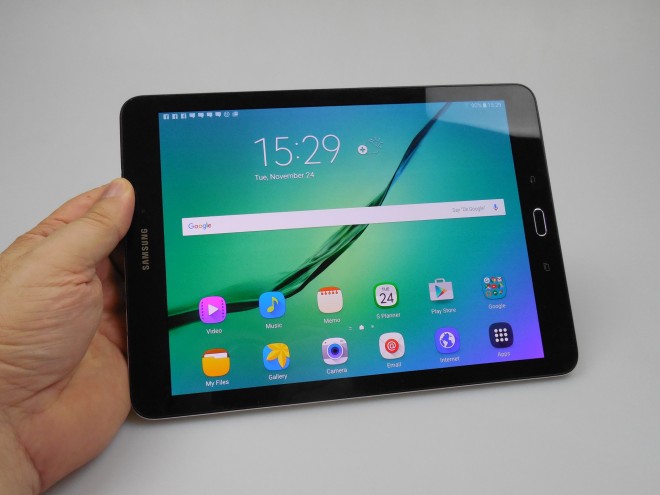 Launched in September, the Tab S2 has two versions: one with a 9.7 inch diagonal and one with an 8 inch diagonal. We had a test unit to play with the SM T810X version of the Galaxy Tab S2 9.7. Priced at $400 on Amazon at the time of the review, the product is positioned as an iPad Air 2 rival on the market. It’s ultraslim at 5.6 mm in waistline and weighs just 389 grams.

This means it’s slimmer than the iPad Air 2 (6.1 mm) and Xperia Z4 Tablet (6.1 mm), plus the Galaxy Tab S 10.5 (6.6 mm). It’s also an impressive 48 grams lighter than the iPad Air 2 and it’s very easy and comfy to hold with a single hand. It’s rather portrait oriented, on account of the position of the Home button. The device offers great grip and has a rubber-like soft touch back. 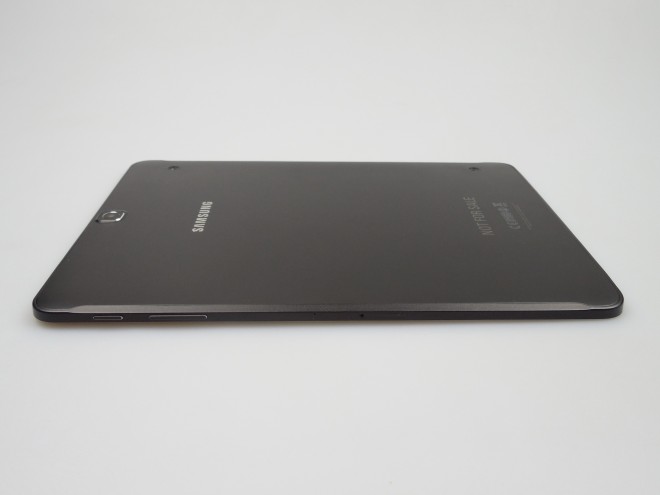 Galaxy Tab S2 9.7 comes with a solid build and a solid metal frame and it switches the orientation of the landscape Tab S 10.5 to portrait this time. Upfront we find the selfie camera, sensors, big bezels that are OK for holding the slate and a Home button with fingerprint scanner included, as well as two capacitive buttons. At the back there’s the main camera and two connectors for special smart covers, while at the top there’s nothing.

The bottom holds the audio jack, microUSB port and two speakers, while the left side has nothing at all. The right side brings the power and volume buttons, all of them with OK feedback. We’ve got a microSD card slot in the mix and I noticed that the metal frame tends to get chipped easily if it hits a table or furniture for example. 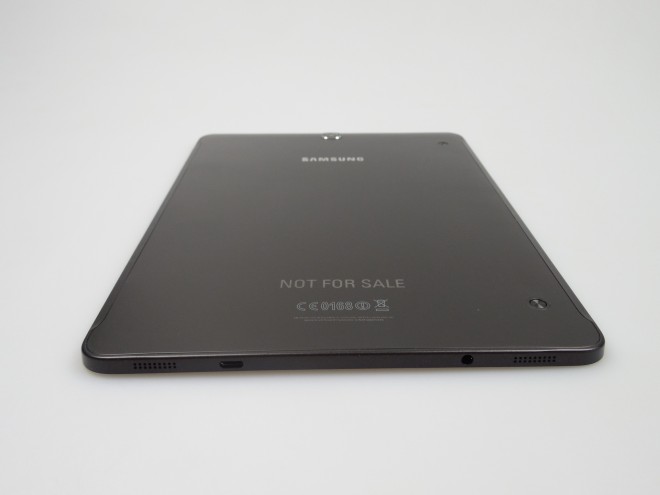 This is a very comfy device, that has the advantage of not getting ice cold in the winter, like the iPads. It comes in white, gold or black and now let’s move on to hardware. The specs list includes a 9.7 inch Super AMOLED panel with 2048 x 1536 pixel resolution, an octa core Exynos 5433 processor, with 4 cores of the Cortex A57 kind, clocked at 1.9 GHz and 4 core of the Cortex A53 kind at 1.3 GHz. 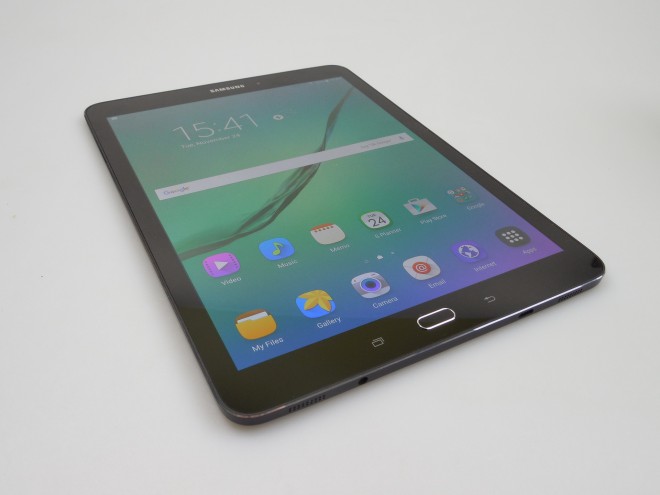 Sensors include accelerometer, fingerprint, gyroscope, geomagnetic, hall sensor and RGB. The battery is of the Li-Ion kind and offers a capacity of 5870 mAh (22.3 Whr), a drop compared to the Galaxy Tab S 10.5 (7900 mAh/30 Wh). On paper this battery provides 109 hours of music playback, 12 hours of video, 8 hours of Internet and speaking of capacity, it’s also more modest than the 27.3 Wh unit of the iPad Air 2.

We did our usual video playback test, with a video on a loop, with brightness at 200 LUX and WiFi on and achieved 10 hours and 45 minutes, which is a good result. We beat the Samsung Galaxy Tab A 9.7, with its 10 hours and 13 minutes, as well as the ASUS Transformer Book T100 Chi (10 hours) and AllvieW Viva Q10Pro (7 hours and 49 minutes). 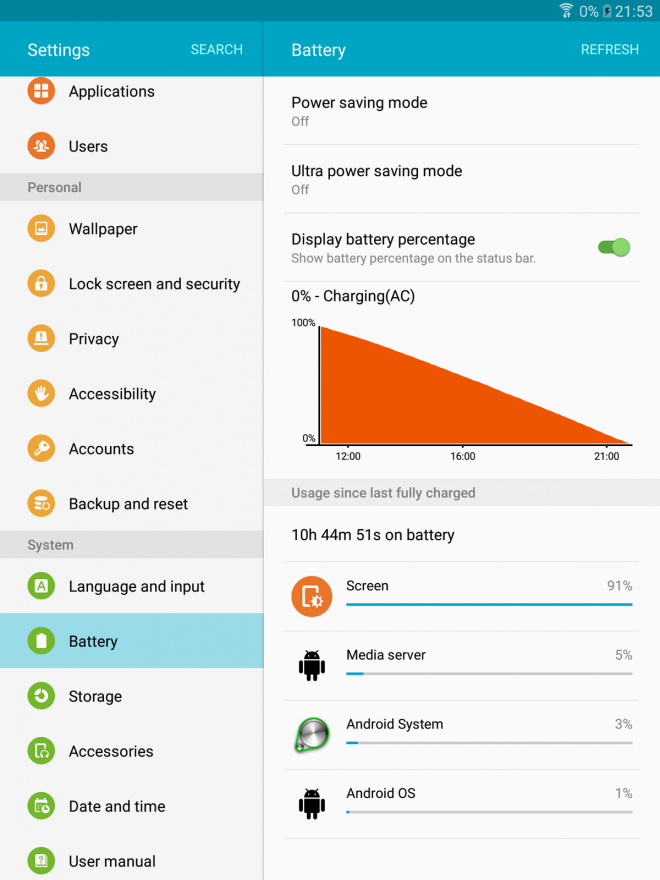 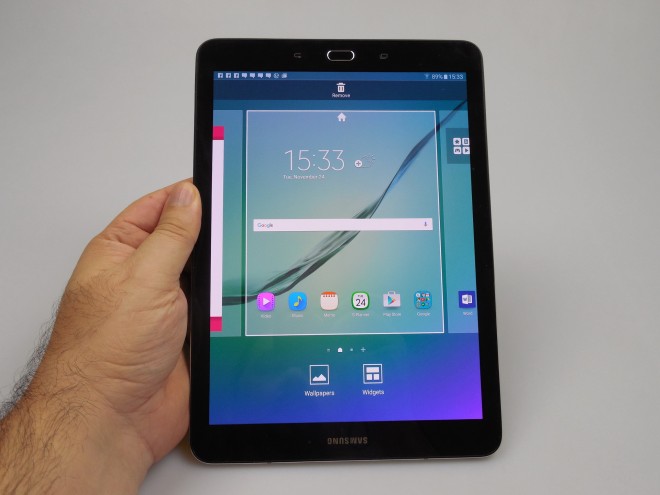 Settings include the usual Power Saving modes, with the regular Power Saving limiting CPU performance, reducing frame rate and brightness and the Ultra Power Saving Mode implementing a gray scale UI, deactivating Bluetooth and only letting you access essential apps. I’d say this is overall a good battery, but overshadowed by the predecessor’s excellent battery.

Acoustics involve two stereo speakers at the bottom and the Music player is a typical Samsung one, with Sound Alive options and EQ modes like Normal, Auto, Classic, Pop, Jazz and Rock. There are also 7 custom channels with sliders to tweak various frequencies and options like 3D, Bass, Clarity, Concert Hall, as well as 2 knobs to rotate, in order to highlight the extra bass, treble and add more instrumental kick and vocal kick in the mix. 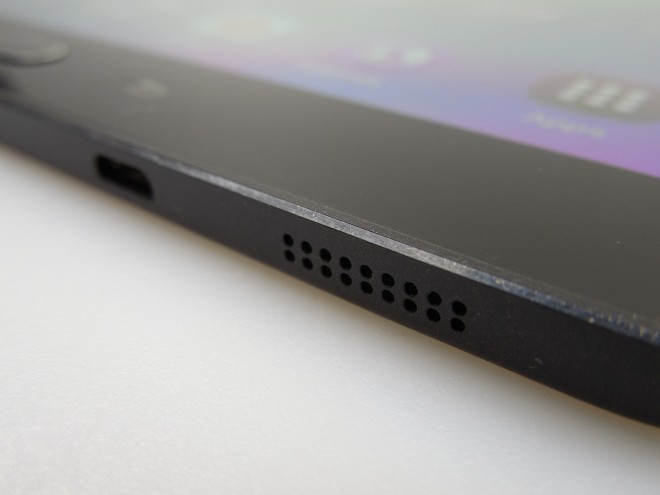 Adapt Sound is also available, as well as Sound Alive+ (rich surround sound), Tube Amp and now let’s see how the speakers handled our tests. While listening to tunes we registered a loud, clear and crisp experience, with good bass and the ability to cover a conversation in a small room. It’s one of the loudest tablets I’ve heard lately and it achieves 83.8 dBA in the decibelmeter test. 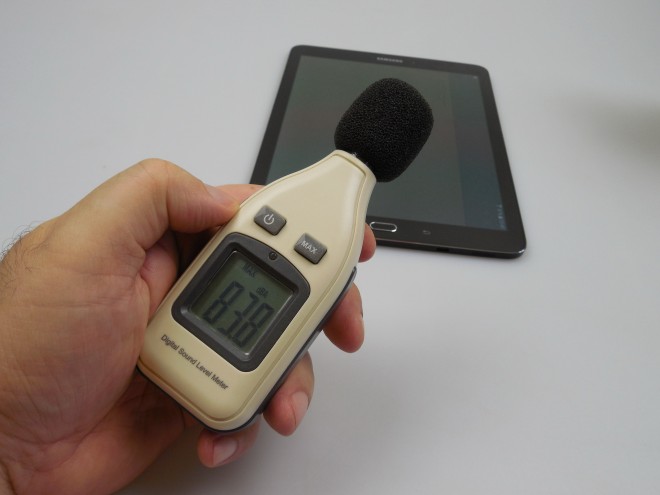 The video player on board is simple and intuitive and has special options for subtitles, aspect and pop up play. You can also pinch and zoom into the video and when viewing we registered fantastic colors, that pop out of the screen almost, very good brightness and a perfect black. The contrast is great and view angles are very wide. Pixels are of the RGB Stripe variety, with a blue pixel that has two subpixels (one green and one red). It’s the same pixel arrangement from the Galaxy Note 2 apparently. 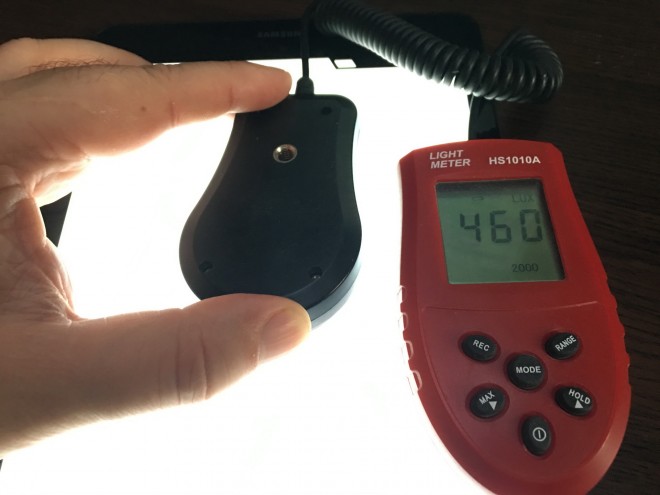 We did a luxmeter test and achieved 460 LUX units, which surpasses the iPad Air 2’s 354 LUX, plus the Galaxy Tab S 8.4 (432 LUX) and Galaxy Tab A 9.7 (402 LUX). Still, the Nexus 7 2013 reigns champion even now with 500 LUX. Settings for the screen include font (style and size), timeout, Smart Stay and Screen Mode (Adaptive Display, AMOLED Cinema, AMOLED Photo, Basic and Reading Mode). An excellent screen and now we move on to the camera.

At the back there’s an 8 megapixel sensor measuring 1/4 inch, with 1.12 microns and F/1.9 aperture. Upfront we’ve got a 2.1 megapixel shooter, with F/2.2 aperture. The camera app opens up pretty fast and has options like timer, effects and Settings that include resolution (8 MP in 4:3, 6 MP in 16:9 and 6 MP in 1:1), as well as video capture resolution (Full HD or Quad HD). Digital stabilization, view mode and geotagging are also here. 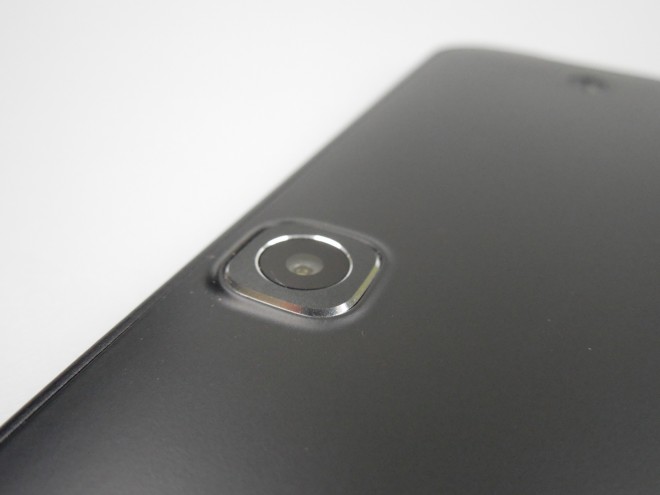 Capture Modes are these: Auto, Pro, Panorama, Virtual Shot, HDR, Shot + More, Dual Camera and extra downloadable ones. The Pro mode offers extra options like white balance, ISO, exposure and metering. The front camera brings functions like Beauty and Gesture Control, while the camera usage experience involved a pretty fast focus, fluid zoom in, exposure slider available on the screen and if you kept the screen pressed, you could lock the AF and AE.

Picture taking is quite fast and we did a mini gallery on a very cloudy day in the park. Few people take pictures with such a big tablet, but we’ll let that slide. Anyway, the images were reasonably clear, colors were good and the selfie I took looked quite decent. There was some background blurring in the landscape shots and artificial feel to most shots. 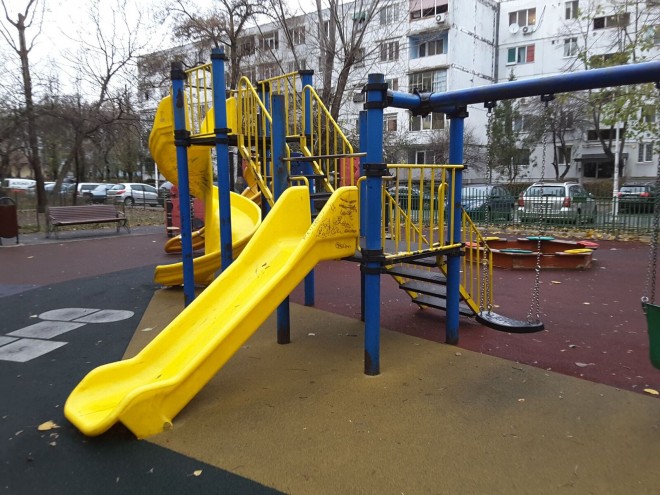 Panorama was reasonably clear and had a resolution of 8368 x 976 pixels. When we zoomed in, detail loss ensued and other than that colors were realistic, focus and exposure were OK and white balance too. Closeups looked decent, while HDR also made the image artificial. I’d say the camera quality is below the one of the Galaxy Tab S 8.4 and iPad Air 2, but pics are OK enough for Facebook.

Video capture happens in MP4 format in Full HD, at 30 FPS and 17 Mbps bitrate. The first video had OK colors, some motion blue and could be clearer, but exposure was good. The second one was clear, had good acoustics and it was overall manageable for a tablet. Once again, this device’s camera clearly beats no iPads, but it’s passable for the average Facebook pic.

Editing is done with options like Auto Adjust, Rotate, Crop, Photo Editor, Collage and there’s a video editor for videos too. We also tested the temperature and after playing the game Riptide GP2 for 15 minutes we got to 32.5 degrees Celsius, which means there’s no overheating. The web browser on board isn’t very fast, but the text in the browser looks great. 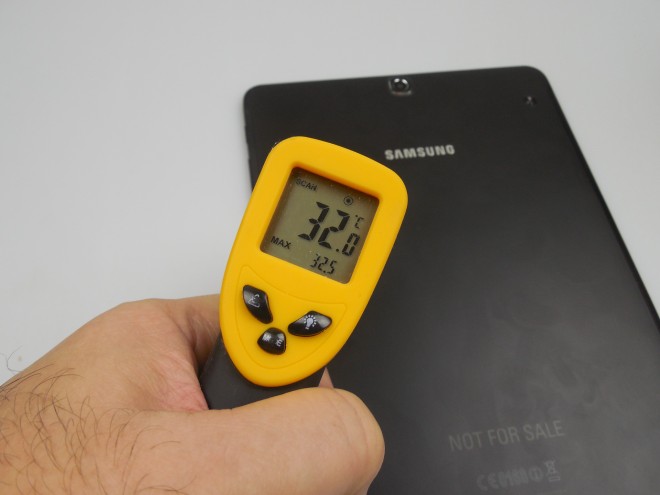 The virtual keyboard is comfy, has a numeric row and options like handwrite recognition, voice control and a floating/split format. Bonus: we also get arrows to navigate around. On the connectivity front, there’s a LTE version of the tablet out there and it has fast WiFi and precise GPS, plus MIMO and MHL, so I’d say we’re covered. The lack of NFC and infrared is a bit of a bummer.

This tablet wins 3 out of 11 tests overall, but it loses 7 out 8 in front of the iPad Air 2, a testimony to the power of the Apple gear. Still, it beats the predecessor in 10 out of 11 tests, so that’s got to count for something. The slate has no lag and games run just fine on it. On the OS and UI side, we get Android 5.0.2 with the latest TouchWiz on top.

Flat and colorful icons are used here, the UI is fluid and we’ve got Flipboard as the leftmost homescreen on the device. Widgets are unique to this tablet brand and they’re quite useful. Multitasking is available both in the usual carousel fashion, as well as split screen, with the ability to resize windows and move them around, plus transfer text and pictures between them. 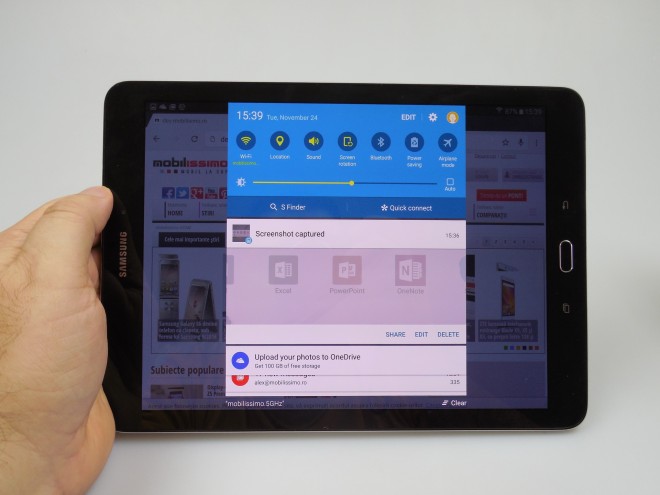 The keyboard is placed between windows and it’s movable around. The dropdown area features the Quick Settings, brightness slider and S Finder, as well as Quick Connect. The fingerprint scanner is very accurate and fast and more secure than on iOS, since it’s backed up by an alphanumeric password. Settings include Motions and Gestures, Security (including letting you sign into services and sites using the fingerprint) and Privacy.

In the video review we did a quick rundown of the way Word and Excel work and they’re excellent for productivity even with touchscreen alone, as well as with a keyboard in tandem. This means that productivity is also an asset of this device. And now it’s time for the verdict!

very comfy for a 9.7 incher
OK battery, but below predecessor
loud
bright screen and excellent colors
no lag
no bloatware
good performance and productivity features

long charging
4:3 aspect is less than ideal for video
camera below the iPads and predecessor
no NFC or infrared
benchmarks below iPad Air 2 one year later

Samsung Galaxy Tab S2 9.7 remains a great tablet for productivity and text reading, plus it has great screen colors and bright display. Its battery is not bad and the only drawbacks may be the 4:3 aspect and long charging, but in the end it’s the comfiest 9.7 inch tablet I’ve used. That’s a boon for gaming and e-reading too. It’s also the most solid Android-based iPad Air 2 rival we’ve tested so far. 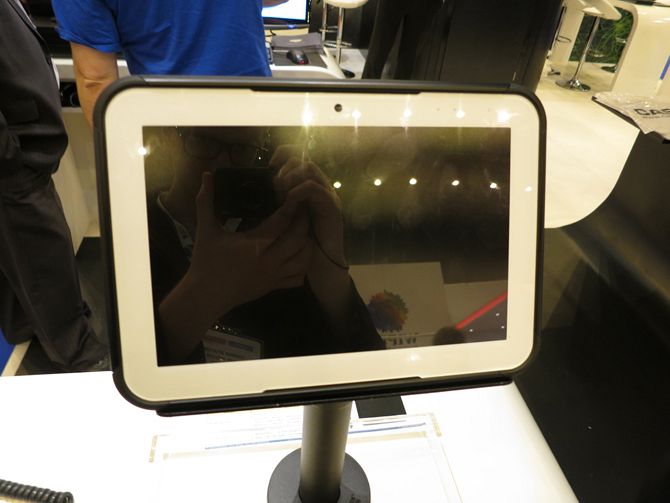