Without an official launch, press event or press release, the Samsung Galaxy Tab S Broadband LTE-A tablet model has debuted in South Korea, with an improved CPU inside and faster cellular connectivity. This model goes for $767.95 in South Korea and it runs Android 4.4 KitKat. 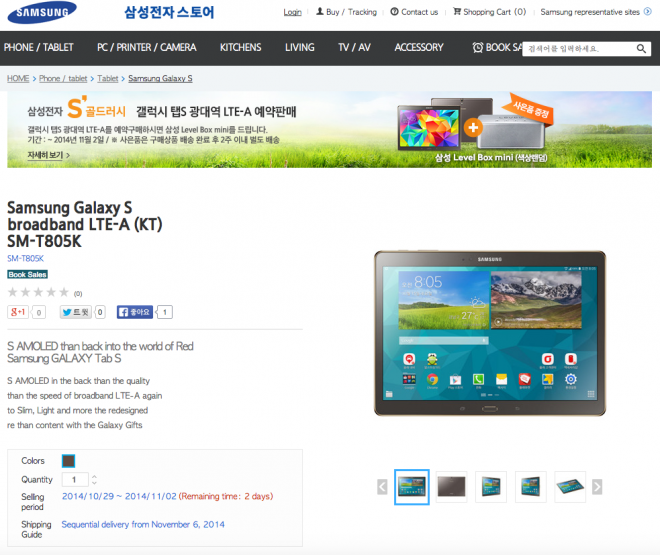 Its specs include a 10.5 inch 2560 x 1600 pixel display, with a Super AMOLED panel, as well as an octa core Exynos Octa 5433 processor, with ARM Mali-T760 GPU. There’s 3 GB of RAM inside, 32 GB of ROM and a 7900 mAh battery. We’ve got Broadband LTE-A available, with speeds of up to 225 Mbps offered here and an 8 megapixel back camera, with the ability to shoot 1080p video. Also, upfront you can find a 2.1 MP cam and other specs include a fingerprint sensor, accelerometer, geomagnetic sensor, gyroscope, Hall sensor and RGB sensor.

The device packs a microSIM card slot for its connectivity needs, as well as dual band WiFi ac/b/g/n with MIMO, WiFi Direct, Bluetooth 4.1, AGPS with Glonass and Beidou, plus a microUSB 2.0 port. This new model is compatible with Gear Fit Manager and Gear Manager, allowing you to connect Samsung’s wearable devices and smartwatches to it. The slate comes in Titaniu Bronze and Dazzling White.