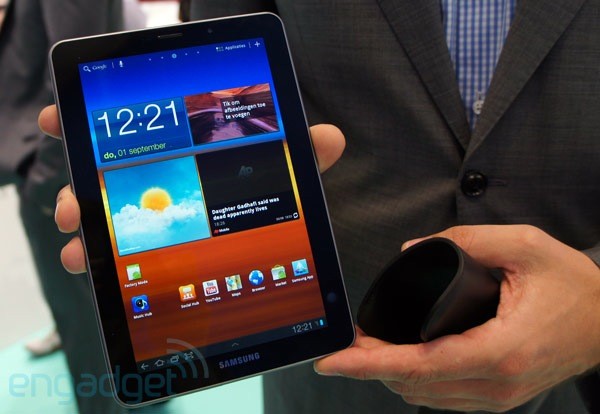 The war between Apple and Samsung has reached a new level, with the South Korean company being forced to pull its fresh product, the Galaxy tab 7.7 from its IFA 2011 stand. We remind you that there’s an ongoing case in Germany regarding Apple’s intellectual property that was apparently breached by Samsung by “copying the iPad and iPhone”.

While the ban on the rest of Europe has been lifted, Samsung Galaxy tablets and phones remain a problem in Germany and even the newcomer Galaxy Tab 7.7 suffers from this. FOSS Patents is claiming that Samsung pulled the Android device from the IFA show floor and German website this weekend. The decision came after the Düsseldorf Regional Court instructed them to do so.

This is the same authority that banned the sales of the Galaxy Tab 10.1 a month ago. Last we heard, the 7.7 inch tablet was spotted with a sticker that said “Not for sale in Germany”, but it seems this wasn’t enough. The result was the injunction we’re writing about here, one that limits consumer choice in Germany, as Samsung spokesman James Chung told Bloomberg.