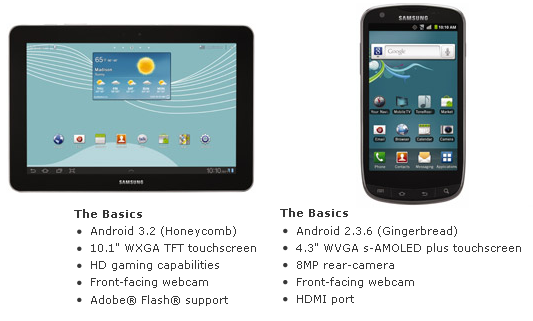 Samsung Galaxy Tab 10.1, the most controversial tablet ever is now coming to US Cellular with LTE connectivity and Android 3.2. This 10.1 inch WXGA slate has drawn the attention of the entire tech world after being banned in Germany and up for injunction in Australia for a short while.

As you know, Apple sued Samsung for copying its designs and making products such as this tablet. In the end, Samsung had to create the Galaxy Tab 10.1N, a device that changes the design of the original slate. Luckily in USA the Galaxy Tab 10.1 is still available untouched and now it’s coming to US Cellular. The tablet will be available on US Cellular in March, but there’s no pricing just yet. Having tested the tablet I have to admit it’s a pretty good device, especially since it’s very slim and very light.

It has a front facing camera, it kind of lacks ports, but other than that it provides a decent experience. With Android 4.0 coming as an update for the tablet, the Galaxy Tab 10.1 will get even better. The only problem here is the TouchWiz UI, that I could certainly do without. If you’re lucky enough, US Cellular won’t include this extra layer of customization.