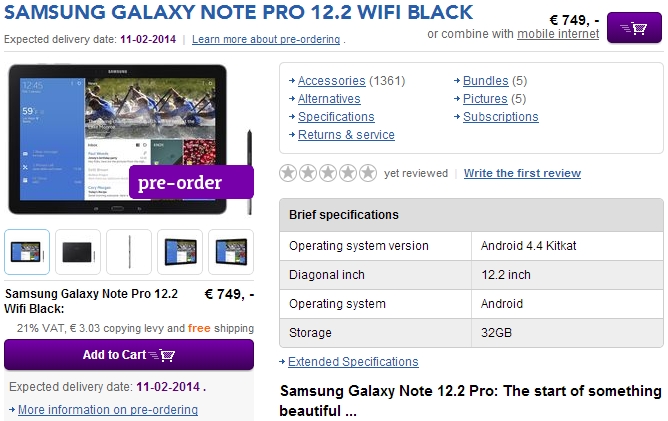 Showcased at CES 2014, the new range of Samsung Galaxy NotePRO and TabPRO slates should be ready to hit the stores in a month or so and some retailers have already started putting up preorder pages. These high end slates may arrive as soon as the first half of February.

Back at CES Samsung promised to make the devices available sometime this quarter. RootzWiki has found out from an anonymous source that the NotePRO and TabPRO units will come to the USA on Valentine’s Day, February 14th. Samsung employees in the US are not allowed to take paid time off in the weekend following February 14th, which is supposed to be a sign of intense activity in their stores.

A retailer in Netherlands has started taking preorders for the new tablets, as shown in the screenshot above. The Galaxy NotePRO WiFi is expected to arrive on February 11th, at least in that part of Europe. This device may be priced at around $750 in USA, a fair translation from the 749 euros requested by the Dutch retailer from above.

Samsung Galaxy Note 8.0 Coming to AT&T in the Following Weeks