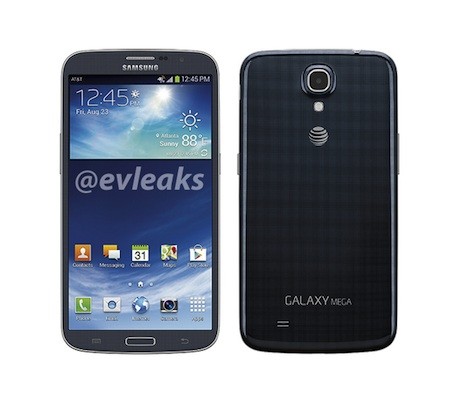 @evleaks is on fire today, so after leaking a LG device, it’s now the turn of its countrymen Samsung to leak something. I’m talking about the Samsung Galaxy Mega 6.3, the giant shown below.

This is supposed to be the AT&T version of the device, complete with a navy blue body and the carrier’s logo at the back, below the camera. One of the versions of the handset that passed through the FCC, codename SGH-I527 Melius had AT&T LTE compatibility, so this has got to be it. No idea when the device will arrive or the price tag it will get.

Samsung Galaxy Mega 6.3 is actually impressive, because it’s a device with an identity crisis. It looks and feels a lot like a bigger phone, but its diagonal size gets it closer to a tablet. Also, the specs are not that impressive, being on the level of the Galaxy S4 Mini. We’ve got a Snapdragon 400 dual core CPU, 720p resolution and an 8 megapixel camera.