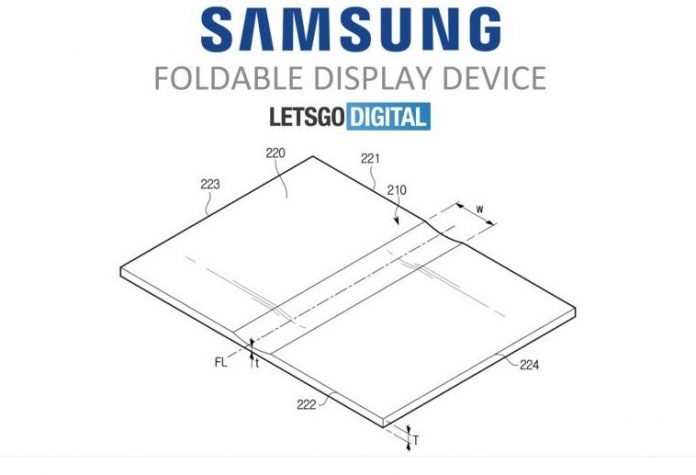 A new Samsung patent has surfaced recently, showing us some sketches of a device with a foldable screen. It may end up as the hybrid between phone and tablet which Samsung has been developing for a while now. Let’s check out the latest leak below.

The Korean firm has filed a patent with the KIPRIS (Korean Intellectual Property Rights Information Service) and the patent depicts a device that has a discrete hinge down the middle and lets the two displays fold together and apart. This time we don’t have a bigger flip phone, but rather a real tablet. It’s certainly not the first time we’ve seen a foldable tablet, with Samsung itself showing a demo video of such a project years ago.

Even back in 2014 they revealed the Samsung flexible OLED display phone and tab concept, shown in the video below. Back then they were probably scared by the advances that LG had made with the G Flex models, but that series has died out in the meantime. Now there’s often talk off the Samsung Galaxy X, even confirmed by company officials and we’re still not sure if it will be a foldable smartphone or tablet. What’s certain is that it will be a limited edition machine, only sold in South Korea.

ZTE Axon M remains the only device of the kind on the market, unless you count Lenovo’s prototypes from the past year. 2018 and most likely CES 2018 will bring us a few models of the type and it remains to be seen how resilient they are, how slim and if the battery lives are decent. By the way the patent above was filed on Nvoember 6th and shows a slimmer than usual design, for this kind of device.