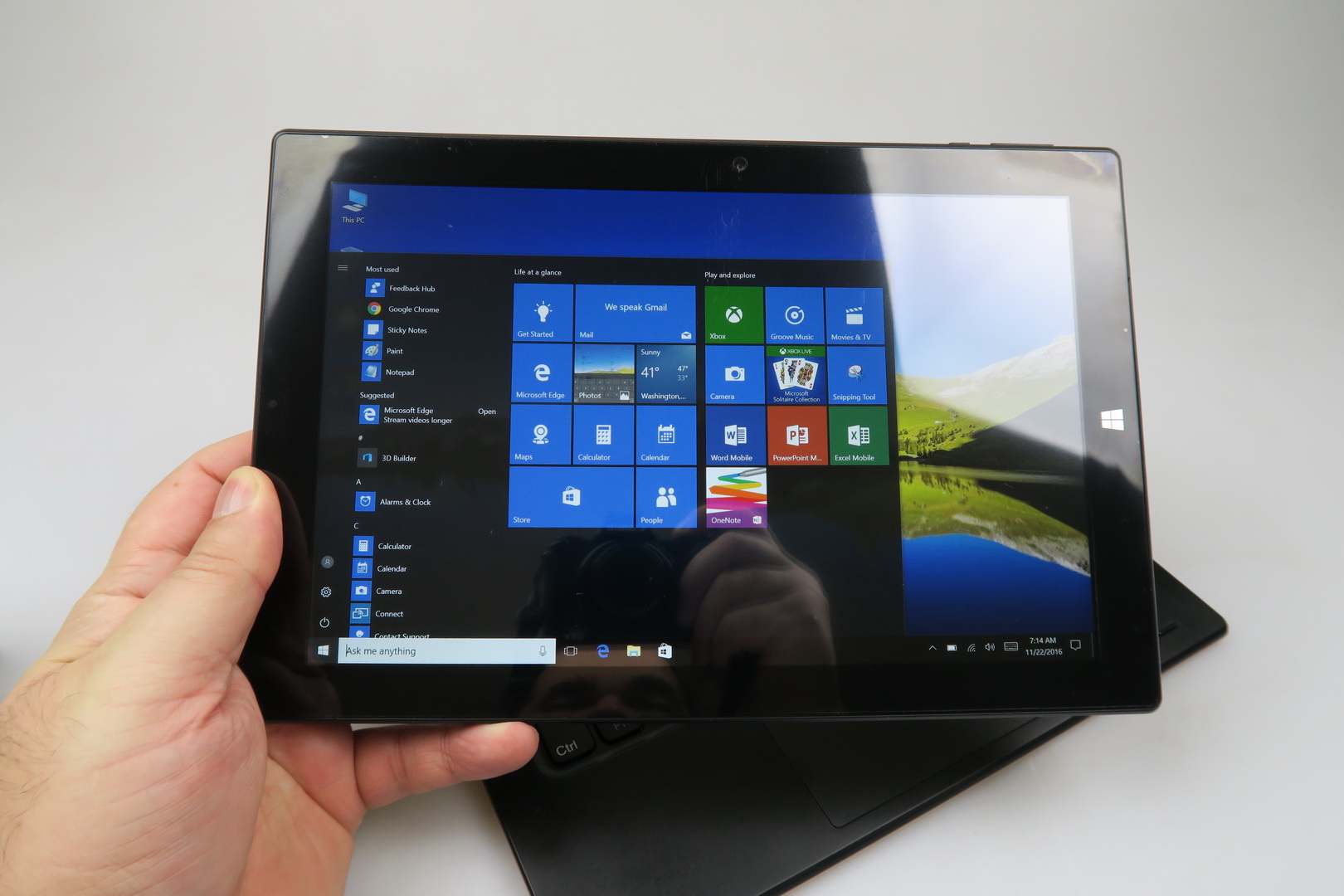 2017 starts with the review of an Onda tablet, a dual boot model that relies on both Android 5.1 and Windows 10 and in tandem with a keyboard it becomes a nifty notebook replacement. The device is dubbed Onda OBook 20 Plus and it’s priced at $150 on GearBest, while its keyboard, sold separately goes for $45. 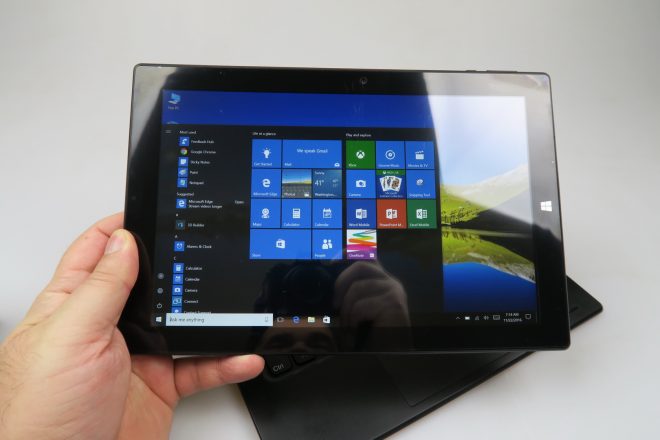 This device is a 10.1 incher with well balanced specs and it can be used as a productivity machine and also to consume video on the go. It stands out through its gold hue and just so you know, Onda has quite the tradition in the field, being active from 1989. The design of the device is better looking than what we’ve seen lately from Chinese slate makers.

It reminds me of something that ASUS or Sony would have made a couple of years ago. It’s got a solid build, big bezels, that make it comfy to hold and the dual tone gold hue at the back side is nice looking. Onda OBook 20 Plus provides good grip, has comfy buttons, but the Power button doesn’t always respond to the command properly, “forgetting” to activate the device. 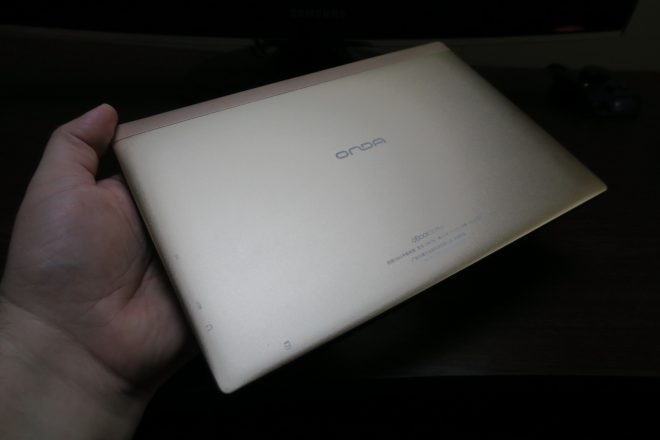 The tablet has a metal case, although to the touch it feels more like plastic somehow. It’s clearly a landscape-oriented device, one that measures a reasonable 8 mm in thickness and weighs a hefty 575 grams. That weight is similar to the one of the ASUS Transformer Pad models from 2012 or 2013. The thickness is pretty OK here and I noticed that this model has a sloped design, so some parts may be beefier and others slimmer.

The keyboard comes with comfy keys, a pretty reasonable trackpad, but one that feels rather cramped and not very precise to wield sometimes. This accessory weighs 600 grams and it’s also 8 mm thick. It’s also colored in gold and has a cylinder in the hinge area, reminding me of a Lenovo Yoga unit. Its rubber feet help it sit with improved grip on a slippery surface. 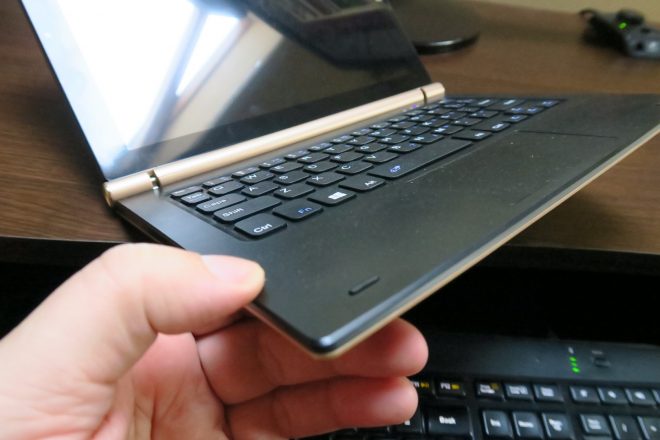 This keyboard also brings a full USB port and it uses pins and magnetism to connect to the slate. It’s a fashionable accessory, but almost 1.2 kg in weight is quite a beefy setup here, especially for a 10 inch “notebook”. The best thing about the design and use experience is the inclination and the angle of the tablet when attached to the keyboard.

It’s ideal for typing and watching vids, so the design is quite good overall. Now let’s get to the display! This one is a 10.1 incher with an IPS LCD panel and a Full HD resolution. There’s 10 point touch support here, a 16:10 aspect and we used Photos as the video player of choice, but somehow we experienced lag in it, which was odd. 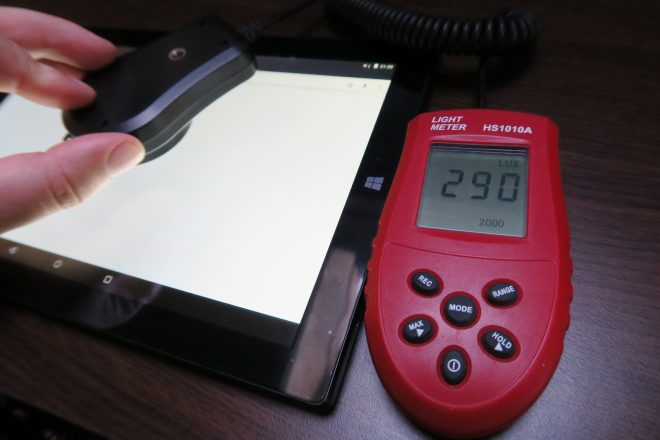 I liked the brightness and colors of the display, the view angles were pretty wide and for indoor video watching it’s quite OK, but the sunlight won’t let you see much of anything, so beware. We took out our microscope and analyzed the screen, spotting an RGB Stripes pixel setup and then we measured the brightness, achieving 290 LUX units, which is rather OK for the price we paid and for indoor use.

This value beats the ASUS Transformer Book T100 and the ASUS ZenPad S 8.0, but even now 4 years later sits below the Nexus 7 2013 and its 508 LUX. As far as screen settings go, we were able to tweak the brightness, font and Enhance Video, for smoother video playback, at least on Android. On Windows we have more control over colors, hues and such things. 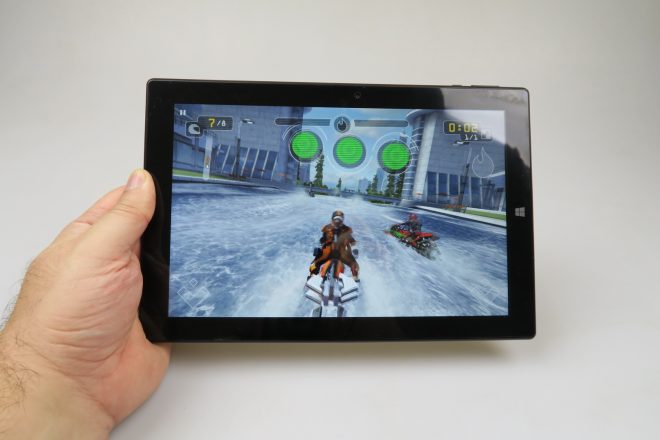 Now getting past the reasonable screen, we come across the rest of the hardware. It includes an Intel Cherry Trail Z8300 quad core CPU, clocked at 1.44 GHz and also offering Intel HD Graphics Gen 8. There’s 4 GB of RAM here, 64 GB of storage, a microSD card slot with support fo up to 256 GB of extra storage. I didn’t experience major lag on Android, except for the moments when I wasn’t expecting it, like the video player and simply entering an app store.

Then there’s that annoying Power button bug we mentioned before. On Windows 10 we did experience a bit more lag, that even resulted in the device getting stuck on account of the Camera app somehow. Gaming checks out fine, since Riptide GP Renegade ran like a charm on this model and the water looked spectacular. We also did some benchmarks, like Quadrant, that brought on a score above the ASUS ZenPad 7.0, but below the Cube i7 Remix. 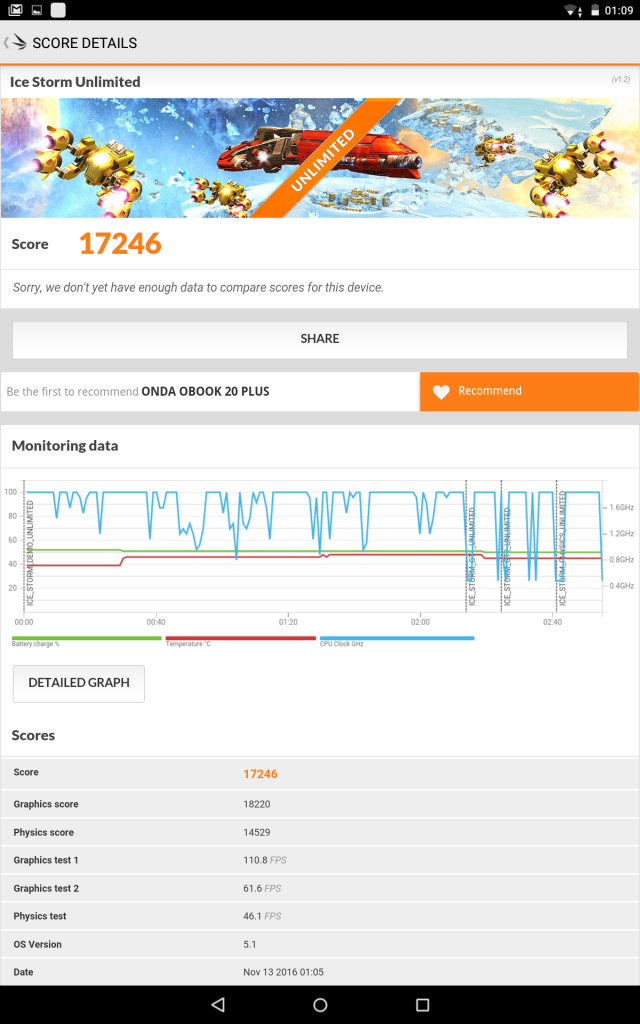 AnTuTu 6 offered us a score above the Chuwi Hi12 and Cube i7 Remix and below the Teclast X98 Plus II. In 3DMark Ice Storm Unlimited we went past the Galaxy Tab S2 9.7, but also scored below the Nokia N1, while in BaseMark X we registered a score above the iPad Air, no small feat. The performance isn’t bad and it’s clearly superior to the Intel Atom slates. 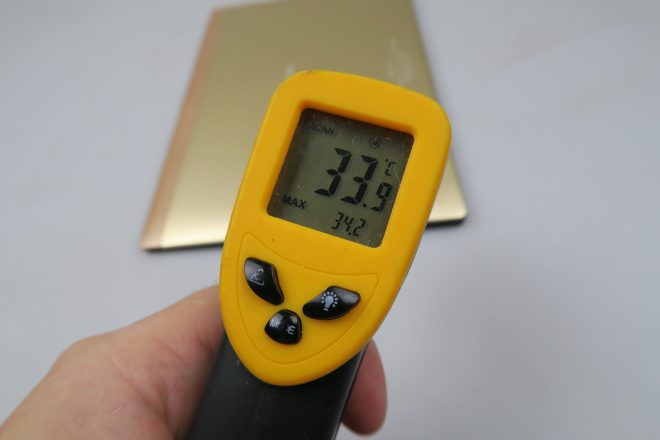 As far as temperature goes, in GFXBench we reached 34.7 degrees Celsius, while in Riptide GP Renegade we got to 34.2 degrees, so there’s no overheating here. On the battery front we’ve got a 6000 mAh unit (3.7V) and the bundled charger is a 5V/1.5A unit. The video playback time we achieved was 5 hours and 10 minutes, which is rather disappointing and unimpressive.

It beats the Teclast X98 Plus II and Cube i7 Remix, at least, but it’s placed below the Xiaomi Mi Pad 2 and Chuwi Vi8. In PCMark, the test that simulates continuous usage we got to 4 hours and 27 minutes, which is once again not very good. At least it goes past the performance of the Cube i7 Remix and Teclast TBook 16 Pro. Nokia N1 and Chuwi Hi12 are better though. 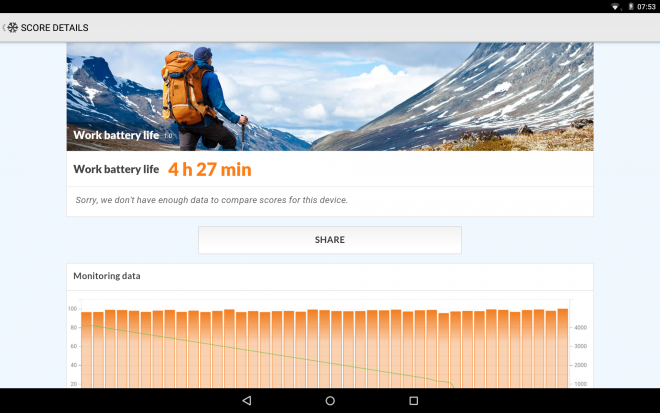 Charging is a reasonable 2 hours and 45 minutes and I only say reasonable because usually tables from China take 3 or 4 hours to charge, even more at times. Battery Settings on Android only include Battery Saver, while Windows 10 offers a Power Saving option, plus a variety of options related to standby and screen timeout. Not a very good battery overall…

Time to talk about the acoustics! Onda OBook 20 Plus has a speaker on the right side of the slate, which is rather easy to cover when holding the device, but luckily that doesn’t drop the decibels by much. We used the preinstalled Music app on Android and the Groove Music app on Windows. The latter has no EQ, but it has a strong online area, with a song store and online radio, while the former brings a stock EQ. 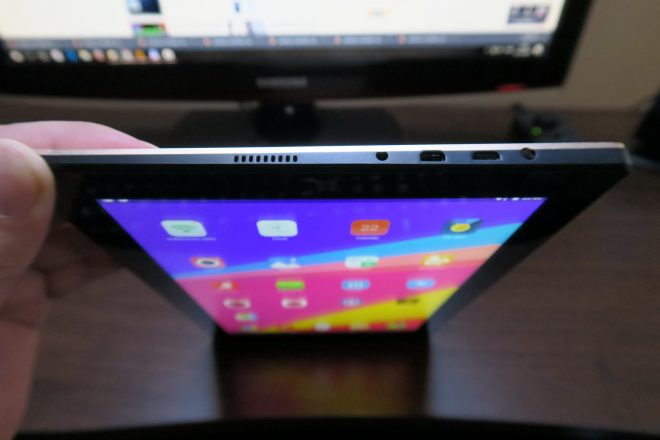 That lets you tweak Bass Boost, Surround Sound, play with 5 custom channels and choose genre settings. The listening experience involved a loud volume, clear sound, OK bass, no distortion and the device is nice for music consumption and movie watching. We also did a decibelmeter test, achieving 83.9 dBA at the left side of the OBook 20 Plus and 85 dBA on the right, using our usual audio sample.

With Riptide GP Renegade in the mix we achieved 85.8 dBA, which is a solid result, that surpasses the Lenovo Yoga Tab 3 Pro, which was actually promoted by Lenovo with the aid of its acoustics. Good audio and let’s see what the camera is all about. We don’t get a main camera, which is puzzling to see in 2017, but we do get a 2 MP front shooter. 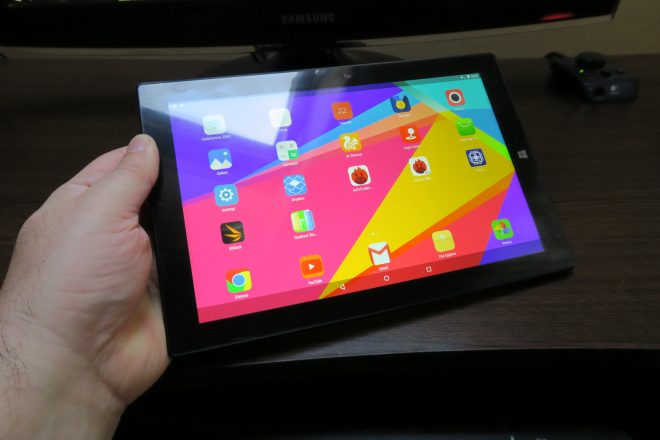 That one can be used for selfies or Skype, but it produces rather grainy shots and its image isn’t very bright. The Windows 10 camera app is much better featured than the Android one, offering options like ISO, exposure, white balance and 720p video capture. Even though I’m not the type of person to use back cameras on big tablets, or encourage its use, I did miss it on this unit.

The connectivity options are pretty classic here, no full USB, no USB 3.0, Type C or Thunderbolt. We only get a microUSB port, a micro HDMI, audio jack, DC charge port and WiFi b/g/n, Bluetooth and the dock pins. Onda also bundled an USB OTG cable, letting you attach mice, keyboards or USB drives. The keyboard contributes with a full USB port. 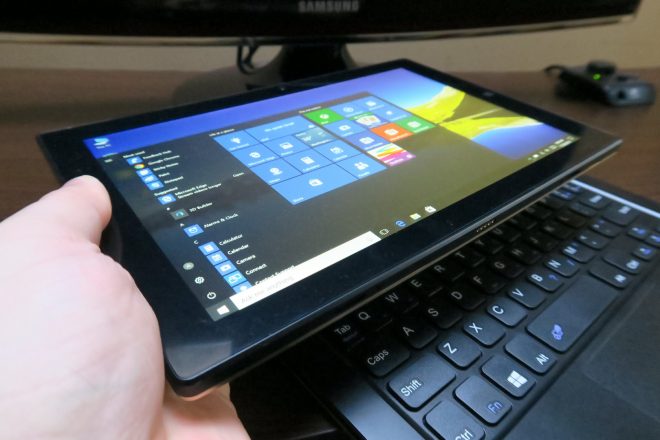 We also tested the browser here, having to choose between a generic browser on Android, Chrome or UC Browser. They were on the slow side, even Chrome, while Microsoft Edge was a bit faster, but also below our expectations. Both virtual keyboards on both OSes were comfy. Time to discuss the OS and UI. We run on Android 5.1 here, which is a bit of a letdown, since I expected at least Marshmallow.

There’s no app drawer and all the apps are placed on the homescreens. The multitasking is done via carousel and the dropdown bit includes notifications and Quick Settings, which include a screenshot option and an OS switch virtual button too. The UI includes custom icons, different from the stock ones and the interface is quite colorful. 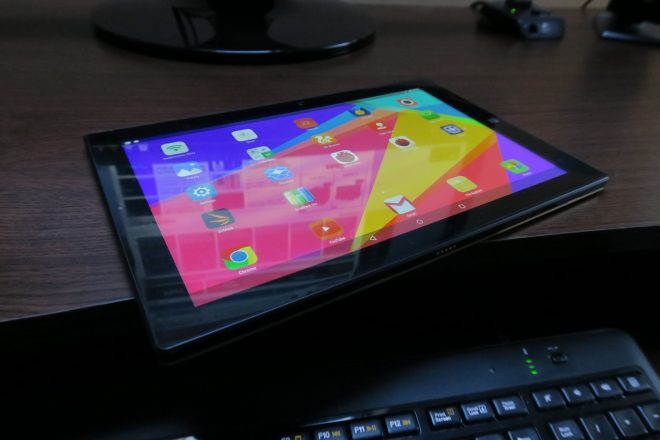 Keeping the homescreen pressed triggers an area with options like wallpapers, effects, theme and settings. The settings are all stock, so nothing to mention here, maybe except the HDMI functionality. The preinstalled apps list includes 28 names, with 2 app stores (one for games and one for applications), UC Browser, Kingsoft Office and then the stock ones.

OS Switch takes a bit longer than I’d want to, after having seen both sluggish tablets that take minutes to switch, but also a device that made the switch in tens or 20 seconds. Windows 10 is typical here, with Cortana, Skype, access to Office (one free month of use offered), multiple desktops, tablet mode and x86 apps. Windows Store is also available. 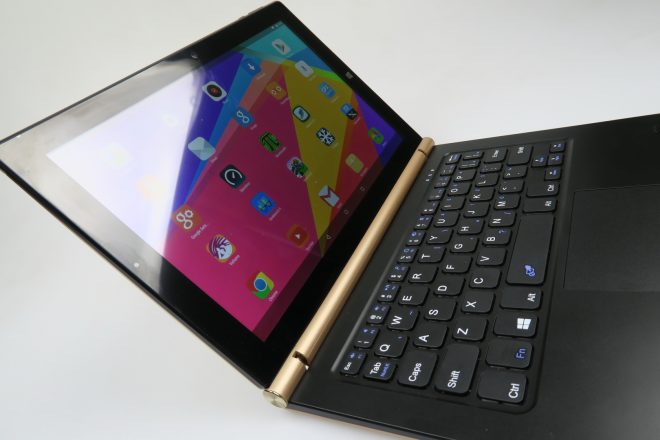 As far as the keyboard goes, it’s comfy for typing, both on the go and at your office, so that’s nice, even though it’s more cramped than the 12 inch and 11 inch tablet keyboards we’ve seen lately. Keys are soft, not backlit and I didn’t have a hard time getting used to their format. So, I guess now it’s time for the verdict!

Onda OBook 20 Plus is a comfy tablet, better looking than most Chinese slates and it offers good feedback for the keys of its keyboard. It’s got a good screen for indoor usage and performance is quite fine. I have to mention that the tablet is about 40% more attractive with the keyboard, than without. I wouldn’t buy it without to be honest.

Otherwise it’s good for 2 back to back full movies, a bunch of audio playback, some gaming and obviously Office work. You can get the device here. 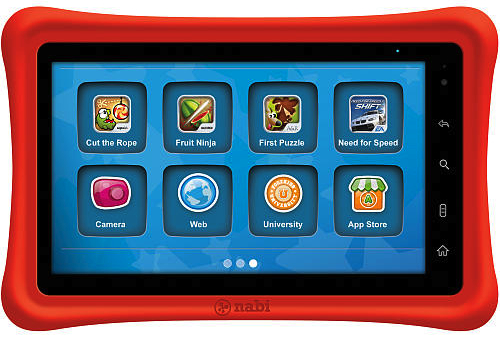