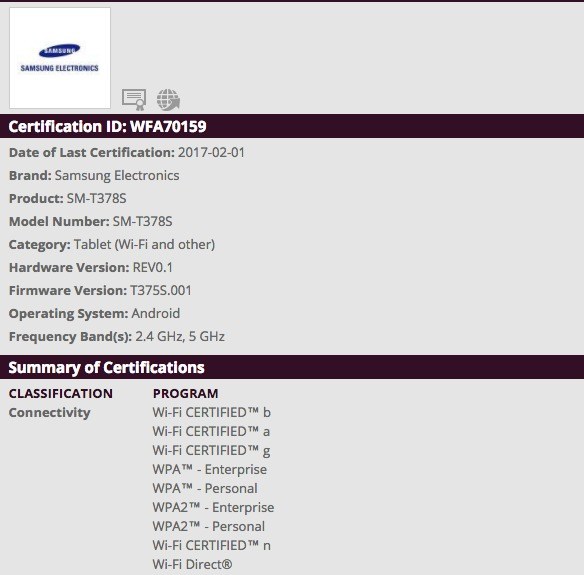 A brand new mystery Samsung tablet codenamed SM-T378 has just been certified by the WiFi Alliance and it’s not very clear if it’s related in any way to the Galaxy Tab S3. All we know is the codename and the fact that the handset supports both the 2.4 GHz and 5 GHz WiFi bands, as well as the usual power saving and connection technologies.

It seems that 4 versions of the slate have been certified in fact, with the other 3 being SM-T378S, SM-T378K and SM-T378L. It’s very likely they stand for various chipsets or cellular connectivity types, as well as various diagonals. We can’t even guarantee they’re Windows or Android models, but the latter is more likely, though. Samsung has already teased a tablet for MWC 2017 unveiling this month.

The teaser seems to show the profile of a tablet, which may well be the Galaxy Tab S3, which has been already codenamed SM-T820 and SM-T825 and certified by multiple authorities. This unit leaked above could be a new Galaxy Tab E or Tab A maybe, with a CPU and RAM bump from the 2016 units. It’s interesting that in the middle of a tablet market turnmoil Samsung decided to take a shot and launch such products.

Samsung Galaxy Note 2 With Snapdragon 600 Debuts in China, We...