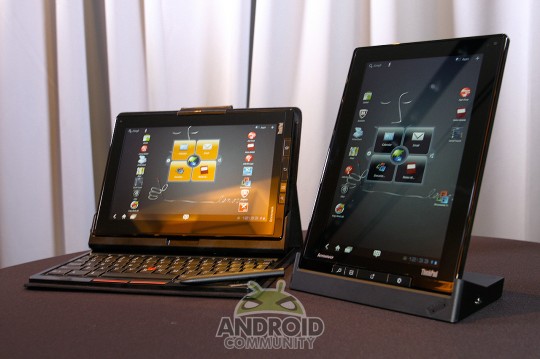 Lenovo’s ThinkPad tablet is a gadget unveiled today together with a bunch of other slates from the same company. However, this unit got some hands-on time, courtesy of Android Community. This Lenovo tablet features a Nvidia Tegra dual core 1GHz processor and a great IPS display.

The screen is a 10.1 inch unit with 1280 x 800 pixel resolution, based on TFT LCD technology. What’s unique about this device is that it supports Tablet Pen input, that will come in handy in lots of apps, even some with handwriting support. Back to the specs, we’re dealing with a slate with 1GB of RAM, 16/32/64GB of internal memory and 3G/WiFi connectivity plus Bluetooth 2.0.

A mini HDMI port, USB 2.0 port and dock port also made the cut. The camera section is classic, with a 5MP camera at the back and a 2MP one upfront. The battery is a 3250 mAh Li-Ion unit, meaning that you’ll get quite a lot of usage time out of this slate. Lenovo ThinkPad grants access to Android Market and this is where the Lenovo Launch Zone comes into play, as a large widget with app shortcuts on it.

You’ve also got Lenovo SocialTouch, that gathers the functions of apps and widgets, including Calendar, Maps and PopMail. Among the accessories for this device we get a ThinkPad Keyboard Folio, that turns the tablet into a ThinkPad laptop, plus the ThinkPad Tablet dock, with several ports and charging purposes.

Also, you get some action time with the slate in the video below: