We’ve managed to test the iPad Air for about a week or so, we played games on it and checked out the upgraded productivity apps, only to be surprised in the end by how good the slate is. Initially, its slim allure made it feel flimsy, but in the end the new iPad is as solid as ever.

The tablet was announced in October, started selling on November 1st and it’s priced starting at $499 for the 16 GB WiFi unit. Its design shows the biggest change of a 9.7 inch iPad ever since the first model, adopting a look that came from the iPad Mini. The thickness is now 7.5 mm, a full 1.9 mm thinner than the iPad 4. The width was also cut, by 8 mm on each side and the chassis is the same unibody aluminum piece we’re used to.

This model is 28% lighter than the iPad 4 and remains a solid piece of gear. It weighs 469 grams, has good grip and a clear portrait orientation. We like the big upper and lower bezel, that allow us to rest our thumbs on the sides when holding the device in landscape mode for video watching and game playing. 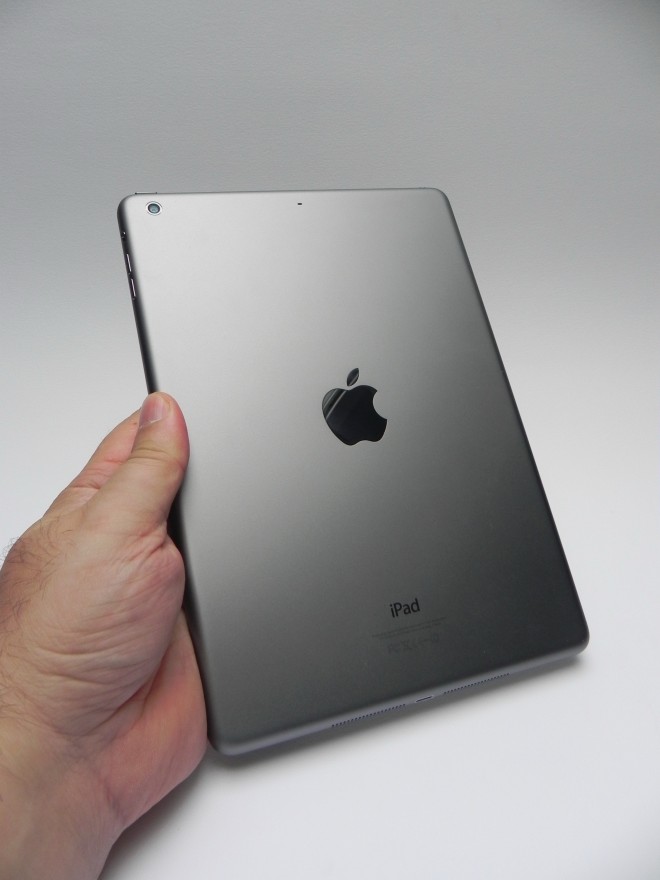 The volume buttons are now pill shaped and the speakers are placed at the bottom, flanking the Lightning port, like on the iPad Mini. The edges are also blunt and corners more rounded. Overall, this design feels lighter, but also remains solid, which is OK for a 9.7 inch tablet. On the hardware side, we get a 9.7 inch display with LED backlight, an IPS LCD panel and a 2048 x 1536 pixel resolution with 264 ppi density and scratch resistant and oleophobic protection.

Inside we find a dual core 64 bit processor, the Apple A7 clocked at 1.4 GHz this time and relying on Cyclone cores. We’ve got a M7 coprocessor inside, a PowerVR G6430 on board, 1 GB of RAM and between 16 and 128 GB of storage. The device integrates a 5 megapixel back camera, a 1.2 MP front shooter and comes with support for WiFi 802.11 A/B/G/N, MIMO dual antennas, LTE, GPS, Glonass and Bluetooth 4.0. There are also stereo speakers on this device, an accelerometer, 3 axis gyroscope and compass.

Moving on to the audio side, we get stereo speakers, an excellent voice and bass in songs and a very good volume, on par with the Nexus 10 and its huge speakers. It’s important to mention that the back of the slate vibrates when you listen to music at maximum volume. Apple insists on placing the speakers in portrait mode on the lower side of the device, but there’s not much space to place them, so it’s OK in the end.

The audio was very good and we’ve even got some special EQ options in the Music area of the Settings. As far as the screen is concerned, this is a 9.7 inch display with a 2048 x 1536 pixel resolution. The video we played showed us a crisp and bright image, good contrast and good view angles. The pixels here are of the RGB Stripe kind and we achieved 380 lux units on white, which is pretty good, but also 2 lux units on black, that’s not quite OK, since the black isn’t deep here, being bothersome during video playback.

The screen has a 4:3 aspect ratio and the color accuracy is very good, with the only problem I see being reflectivity when bright light sources are around. The camera is also pretty impressive for a big slate, a 5 megapixel unit that’s the same one as the iPad 4 one. What we get here is a F/2.4 lens, a wide field of view, that gives you a 3.3 mm focal length, like on the iPad Mini.

The camera offers very fast capture, good HDR and the classic iOS 7 camera options: HDR, video, photo and square. There’s no panorama here, or slow mo sadly. The iPad Air offers fast autofocus and fast picture taking, plus good colors in pictures, good brightness and even good indoor shots, in spite of the lack of flash. There’s an entire gallery of shots taken with the iPad Air here. On the video side, the image is crisp, the focus is good and the resulting video files have a bitrate of 17 Mbps.

The audio capture is also decent, in spite of being mono. As usual the video capture starts off a bit more zoomed in that I’d like, but the Full HD 30 FPS experience is very good. On the benchmark side, we used all the famous test to see what the Apple A7 CPU can do. In BrowserMark 2.0 we scored 3563 points points with the iPad Air, compared to the 3055 points with the Galaxy Note 3 or 3578 points with the iPhone 5S, so pretty close to the latest iPhone.

Then came GeekBench 3 with a single core score of 1481 and a multi core score of 2697, beating the iPhone 4S by only about a hundred points in each test, but once again the Note 3 was superior, with 300 points more. In BaseMark X we scored 13.3 FPS with the iPad Air, past the 9.3 FPS of the iPad 4. The device reaches a temperature of 34.4 degrees Celsius after 15 minutes of gaming, which is quite OK and expected from an aluminum slate.

Safari is very fast, as shown in the video review and loads pages almost instantly, while the rest of the iOS 7.0.3 experience seems to feel more at home on a larger screen than on the iPhone 5s, if you ask me. The notification center has the 3 tabs included and is triggered from the top, while the control center offers you shortcuts to brightness, music player, camera, timer, do not disturb and connectivity switches. The usual effects and transitions are here, as well as the new flat UI, icons and unlimited apps included in a folder now.

The settings are better organized and easier to find than on iOS 6.0 and you can multitask with a double press of the Home button and a swipe to close down apps. There are also 4 and 5 finger gestures, also serving to multitasking and reach the homescreen easily. Siri now offers a female and male voice, integrates Wikipedia and offers more info about actors and sports, among others.

The app list here is the usual one, with the Calendar, Pics, Clock, Maps, Notes, Reminders and Game Center, all of them with a new and flat design. The App Store now has a tab interface and a Nearby section, while iOS 7 also brings automatic updates for apps. There are new versions of apps like iPhoto, iMovie, Pages, Numbers, Garage Band and Keynote available, as well as iBooks, all of them detailed in the video review.

I have to say that I was very impressed by Pages, that feels like  very solid alternative for Office Word, if you’re planning to write an essay on the go, with lots of font options, alignments, insertions of graphs, 3D elements and other such things. Spreadsheets are also easy to edit and create and iMovie has a funky Trailer mode that I fell in love with, allowing you to play with a storyboard and do a lot of editing and template play.

In the end we showed you a bit of Infinity Blade III for the sake of emphasizing top notch graphics. And now for the Pros and Cons related to this device!