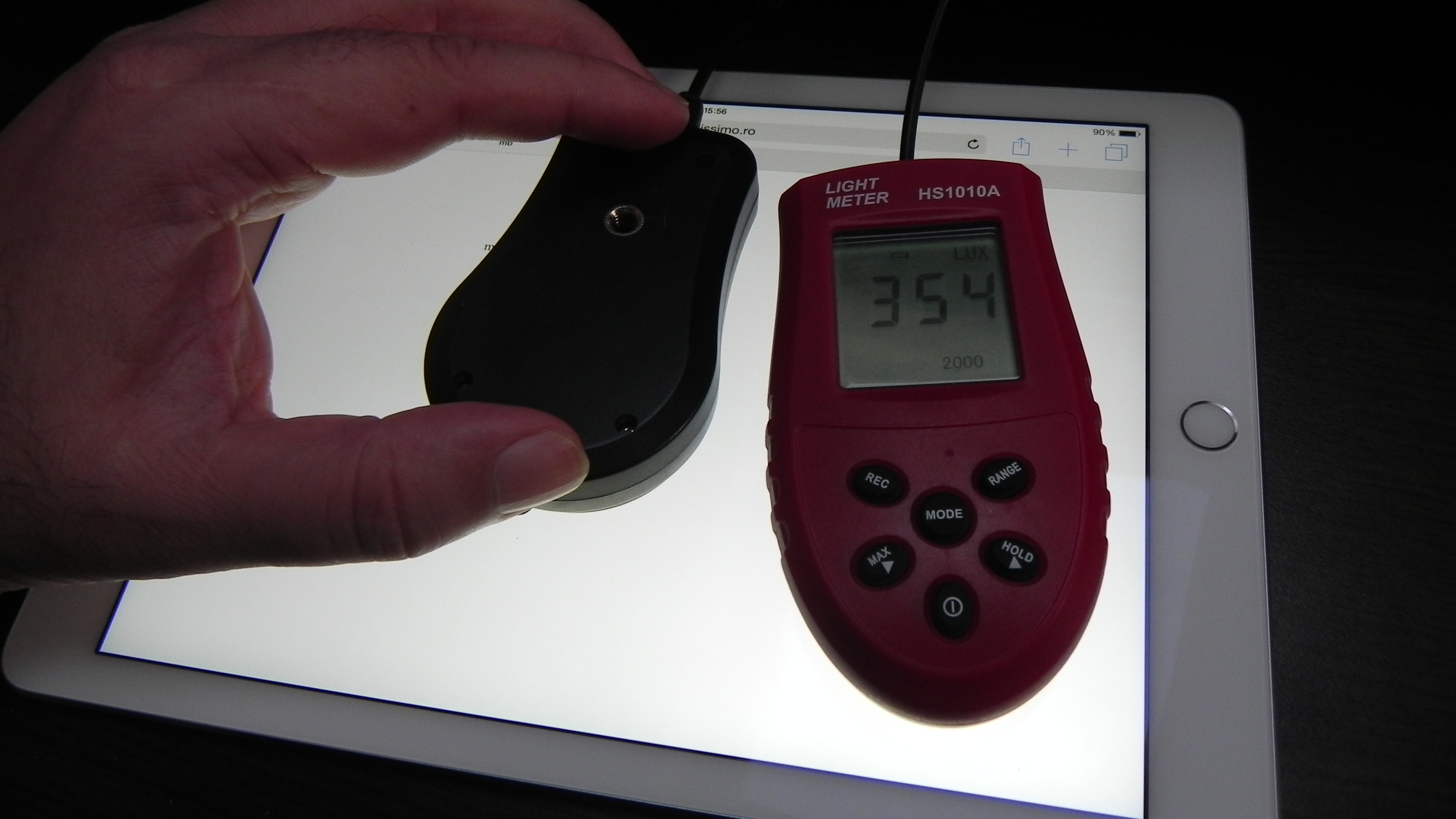 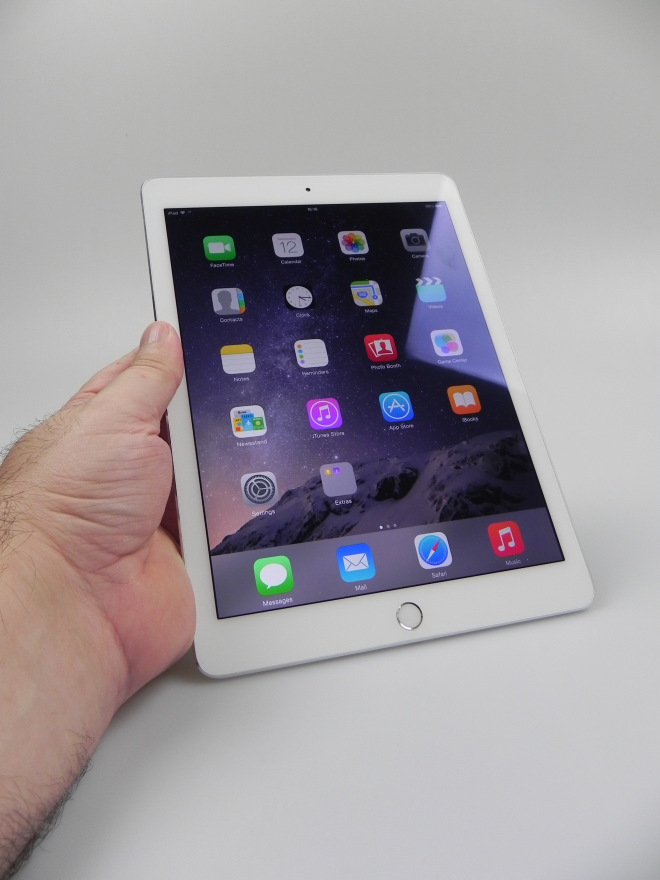 The new model is one of the slimmest slates on the planet, with a 6.1 mm waistline and it weighs 431 grams. The product comes in silver, gold, space gray and it adopts a metal unibody design, that involves aluminum as the main material. The bezel feels large for 2014 standards and the format that feels like a bigger iPad Mini has been kept with some minor changes. The iPad Air 1 was 7.5 mm thick, so this unit is 18% thinner and it’s also 32 grams lighter.

It comes with rounded corners and edges and a no gap display, as well as good grip. The iPad Air 2 packs a fully laminated display, not relying on a separate LCD, touch sensor and cover glass. It uses in cell touch technology instead. This means we get less layers between the LCD and the outside and less reflectivity. At the front of the tablet we find a front camera, Home button with Touch ID fingerprint scanner and the whole facade is covered with glass. 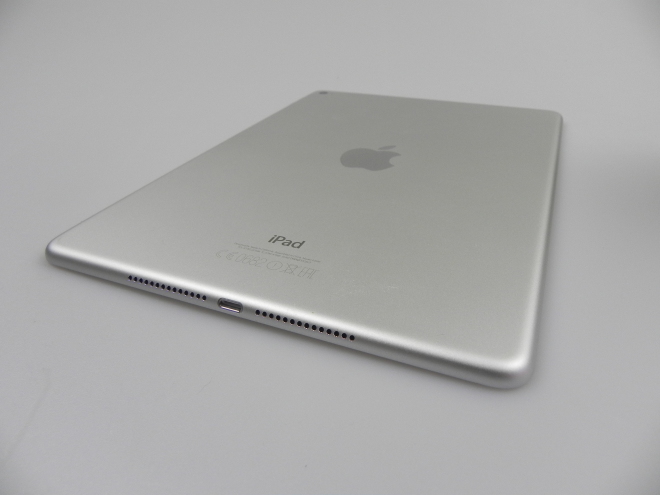 There’s a main camera at the back, microphone and logo, while at the top there’s an audio jack and On/Off button, with OK feedback. On the right side there’s a microphone and separated volume buttons, with good feedback, while the mute/lock switch is now gone, being replaced by shortcuts placed in the Control Center. On the left side there’s nothing, while on the bottom there are bigger speaker holes, integrated as a single row, not two, like on the iPad Air 1, plus there’s a Lightning port between them.

This device is solid in spite of the thin waistline and it’s also easy to hold with one hand. It’s got a premium design, but the big bezels are starting to feel old nowadays. The hardware includes a 9.7 inch display, an IPS LCD with LED backlight and a 2048 x 1536 pixel resolution, as well as a fingerprint resistant coating. The CPU inside is a 64 bit Apple A8X 3 core unit, clocked at 1.5 GHz, with 3 billion transistors and 20 nm manufacturing process. 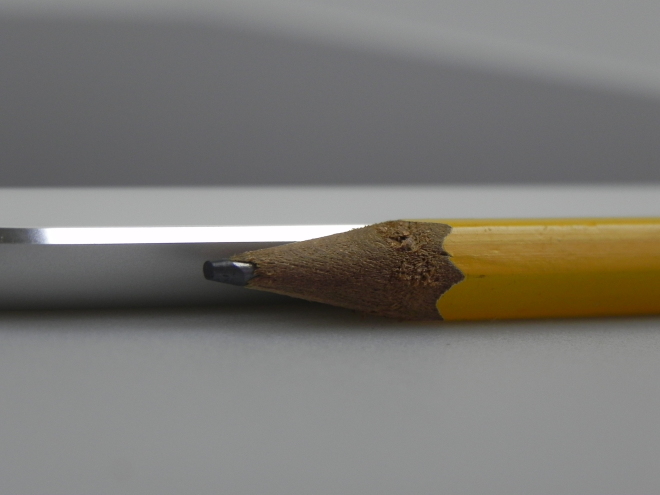 The GPU is a Power VR GXA 6850, that’s 2.5 times more powerful than the GPU of the Air 1. The RAM is 2 GB of LPDDR3 with 128 bit memory bus and we’ve also got the M8 motion coprocessor, 16, 64 or 128 GB of storage, an 8 megapixel iSight back camera with autofocus and F/2.4 aperture, plus a front 1.2 MP camera with F/2.2 aperture. Touch ID and varied connectivity rounds up the specs list, plus a digital compass, stereo speakers, an accelerometer and gyroscope.

The iPad Air 2 comes with support for LTE and GPS in the cellular version, as well as WiFi 802.11 A/B/G/N/AC (dual channel), MIMO and Bluetooth 4.0. The battery inside the slate is a Li-Polymer one, with a capacity of 7340 mAh (27.62 Whr), while the iPad Air had a 32.4 Whr battery. On paper this power source gives the user 10 hours of WiFi surfing or video playback. In our test, involving a HD video playback loop with 50% brightness and WiFi on, we achieved 11 hours and 13 minutes of playback, which is very good, even when compared to the 11 hours of the iPad Air 1 and especially well when we remind ourselves of the 6.1 mm thickness. 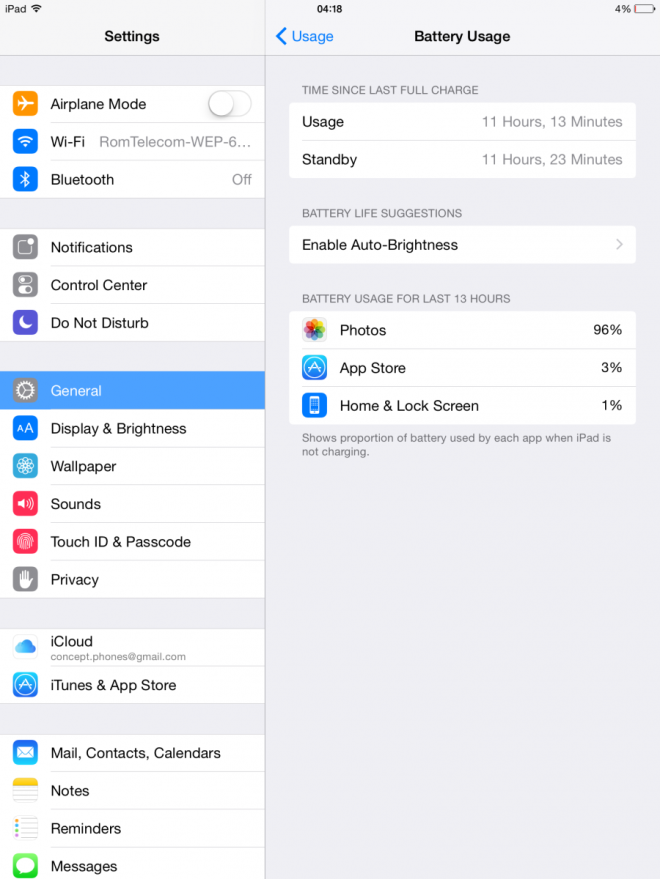 Only the Galaxy Tab S 10.5 can achieve higher battery life than this tablet. With medium/average usage, the iPad Air 2 can easily give you 2 or even 3 days of functioning time. The charger bundled with the product is a 10W one, with a 5.1 V output and 2.1 A. The iPad Air 1 one brought a 12 W one, that charged the device in 3-4 hours. The iPad Air 2 charges in 3 hours and 46 minutes, which is huge, but overall the battery is very good.

Moving on to the acoustics, this device integrates stereo speakers and offers a loud and crisp experience, as well as good bass. I have to mention that its back vibrates quite a bit, but the sound is warm and it can easily rival any sort of handset or tablet out there. We achieved 86.3 dBA, while an iPhone 6 scores 85.2 dBA and the iPhone 6 Plus only 83.8 dBA. Meanwhile, the LG G3 gets to 87 dBA and the Galaxy Note 4 to 89.5 dBA. 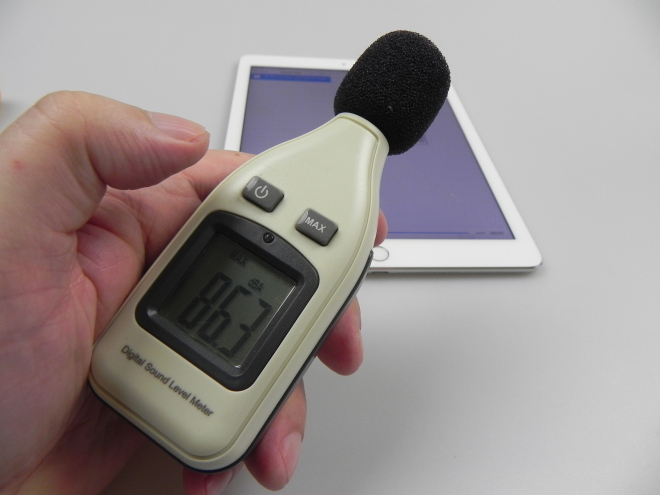 Acoustics are overall good and I’d say that this is the loudest tablet of 2014. You can also go to settings and access options like Sound Check or an Equalizer based on genres. As far as video goes, there’s a 9.7 inch display on board, an IPS LCD with LED backlight and a 2048 x 1536 pixel resolution. The density is 264 PPI and we’ve got an anti reflective coating on. There’s also an anti fingerprint thing going on and this display is fully laminated.

The video experience brings vivid colors, a crisp image and clear one, plus it has good contrast and very good brightness. The colors are realistic and there are also wide view angles in the mix. Apple included a new in cell touch technology here, that decreases glare. Glare has always been a problem for iPad models and we’re certainly aware of that, facing it during reviews. Sunlight behavior is also good and the pixels are of the RGB Stripe kind. 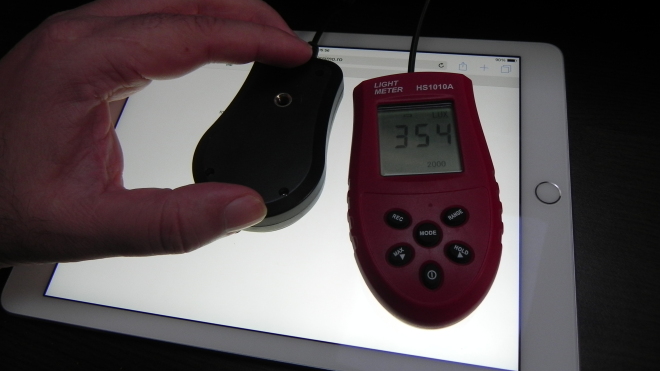 When it comes to brightness, we achieved 354 LUX units on white, which is theoretically weak, especially when compared to the gigantic 600+ LUX of the Note 4 and iPhone 6 Plus. We’re still past the 310 LUX of the Xiaomi Mi Pad. With regular activities, like playback, games and video I’d say the tablet is bright enough. Meanwhile, the iPad Air 1 offered 380 LUX units, so it was brighter than this model, on paper at least. This is one of the few cases where the display LUX level can be ignored in favour of more pragmatic conclusions.

Now we move to the camera, that has been upgraded from the 5 MP unit of the iPad Air 1 to an 8 megapixel shooter, an iSight one with autofocus. The main camera has a F/2.4 aperture, a 5 element lens, BSI, hybrid IR filter and it takes panoramas at up to 43 megapixels. The Air 1 also had F/2.4 aperture by the way and the focal length is still 3.3 mm for both iPad Airs. The pixels measure 1.1 microns and ISO goes up to 800. The UI is very simple, including a timer option, HDR, time lapse, slow mo, photo, video and square. There’s also a Panorama option and the ability to setup exposure with a special yellow slider on the main area of the screen. 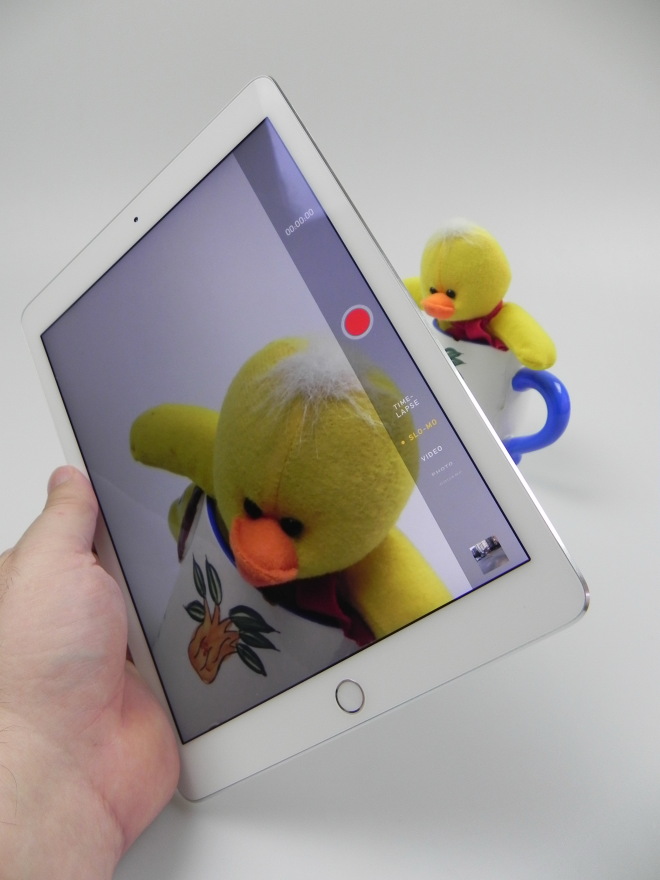 Picture taking is fast, but the focus is not very fast. I also noticed the lack of effects and filters to play with here. Moving into the gallery, that includes the pictures we’ve taken, we uncover that the shots are at about the same level as the ones of the iPad Air 1, but only slightly crisper. I would even go as far as to compare them to the shots of the iPhone 5. Colors are vivid, details are great and we’ve got a nice looking panorama. HDR is subtle and well applied, while the macros look very nice for a tablet.

One of the most impressive aspects here was the incredible lack of bad shots. This camera simply can’t pull a dud. Video is taken at 1080p and 30 FPS and we’ve got a pretty good electronic stabilization. Video zoom is 3X and the image is crisp, clear, plus the focus is good. There are some minor exposure problems, but they’re no deal breaker. 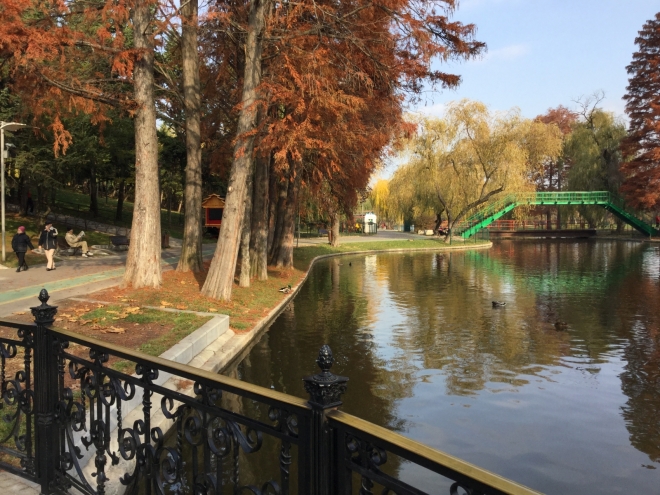 Audio is captured in stereo and we’ve even got slow mo, that looks fine at 120 FPS and 31 Mbps bitrate, in 720p. The Full HD clips have a bitrate of 17 Mbps. Overall this is a great camera, both for a tablet and let’s say a 2 year old flagship phone. Camera roll is back with iOS 8.1, so the photo organization is not chaotic anymore. I would call this the best tablet camera of 2014.

You can also edit the shots taken, with options for light, colors, black and white, crop and easier rotate and effects. The front cam is a 1.2 MP unit with F/2.2 aperture, 720p video and BSI, plus auto HDR. The ISO goes up to 2000 here and FaceTime calls are brighter. As far as temperature goes, this model reaches 34.8 degrees Celsius, after playing 15 minutes of Riptide GP2, so it doesn’t overheat. 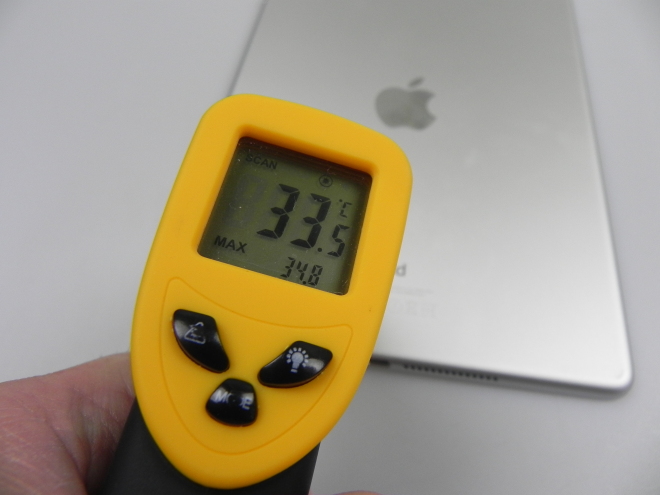 The web browser on board, Safari is ultra fast and the virtual keyboard is comfy, in spite of the lack of a numeric row. And now let’s see the benchmarks, in which the iPad Air 2 duels the iPad Air 1, iPhone 6 Plus and Nexus 9: 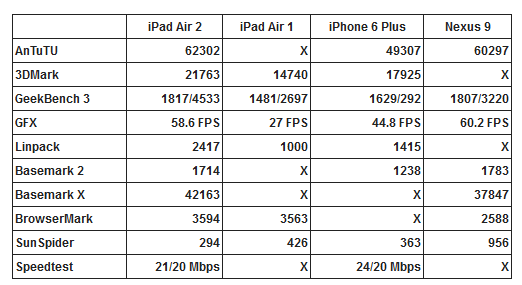 As you can see in the table above, the iPad Air 2 beats all of its rivals and obviously it doesn’t have any lag, offering ultra fast functioning. The differences are even big compared to the iPad Air 1, which is a very high praise for this model. We tried out rendering a Full HD video in iMovie and it took 48 seconds for that to be done, with the resulting video being 2 minutes long.

My Intel Core i3 PC takes 10 minutes to render that much, so that’s impressive for the iPad Air 2. The slate’s shutdown takes 14 seconds, while the boot time is 21 seconds. The iPad Mini Retina meanwhile boots in 20 seconds. The Control Center area now features the mute and lock virtual buttons, while the today area includes the brand new widgets in iOS 8. You can double tap the Home button to trigger the multitasking area and Favorite phone numbers and such. 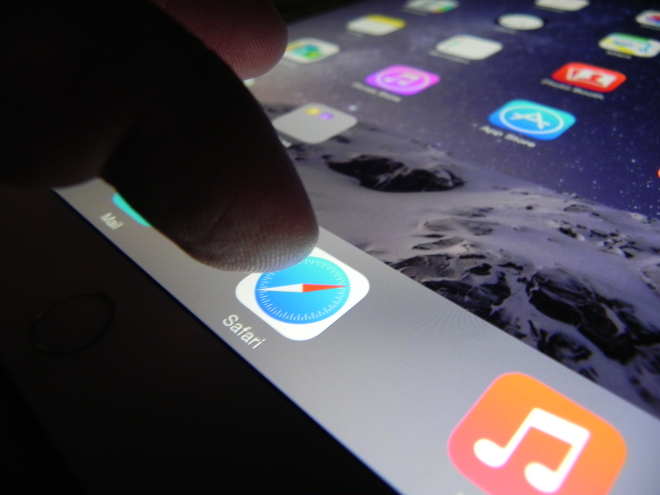 Spotlight now connects to Wikipedia, the web, mail and also allows you to do searches on your device. Siri can be activated with the Hey Siri command and it integrates Shazam now. I should also mention that iCloud Drive is able to save data from Dropbox, iMovie, Safari and the game Riptide GP2 with no problems. Then there’s Handoff, allowing  you to start working on something on the Mac and continue it on the tablet and viceversa.

Touch ID also got demoed in the video review, proving to be fast, but the setup has become harder than on Samsung devices, while the backup passwords that Apple applies are less secure than Samsung’s. iOS 8.1 brings to the table stuff like Apple Pay support, iCloud Photo Library (beta), bug fixes, Airdrop support for Passbook Passes and also brings dictation for keyboards, separate from Siri. 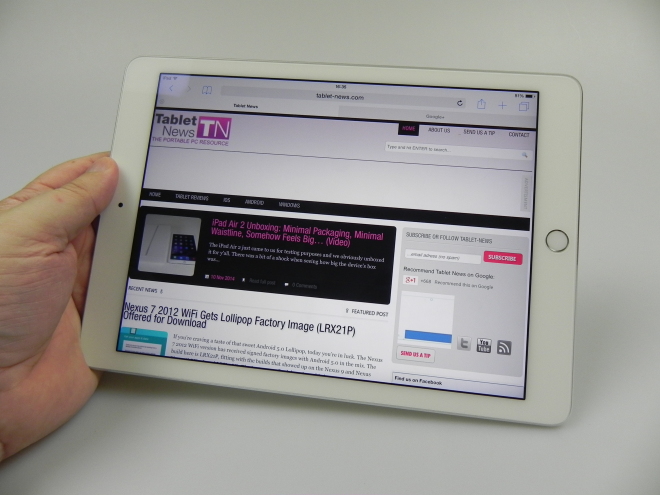 There’s Healthkit access to the data in the background and now you can send/receive texts and MMS messages from any device (iPhone, iPad, Mac, iPod touch). The preinstalled apps list includes FaceTime, Calendar, Photos, Contacts, Maps, Notes, Reminders, Photo Booth, Game Center, Newsstand, iTunes, App Store, iBooks, Podcasts and then there’s the free productivity suite, with Numbers, Pages, Keynote, Garage Band, iMovie. Finally, there’s iTunes U, Find Friends and Find Phone. Just like I said in the iPhone 6 Plus review, the UI on this device is the same as the one from many years ago, when the first iPad debuted, at least as concept, so it needs a change.

We give this model a 9.5 out of 10 for design, a 9.8 for hardware and a 9.5 for OS and UI. The final grade is 9.6 out of 10 and this is still the best 10 inch tablet (or close) that money can buy in 2014. However, the iPad Air 1 is also a very solid buy, since the price is lower now. None of them suffer from lag and both are great for games and productivity, plus media. The question is: do you want that extra bit of power?