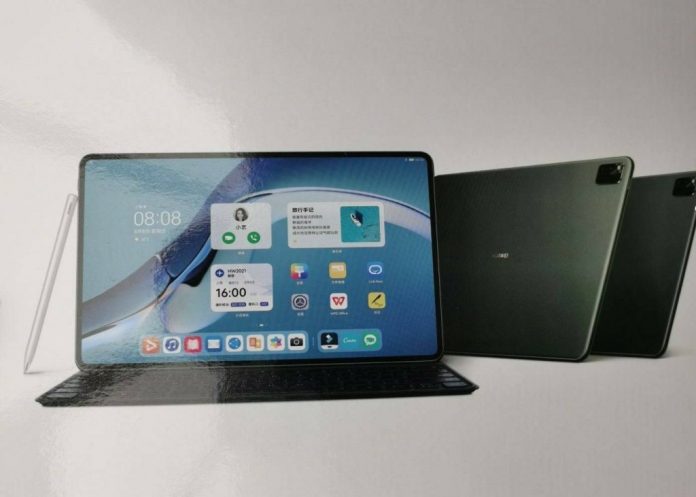 On June 2nd Huawei is prepping a big old event, where they’ll unveil the final version of their brand new platform HarmonyOS. That’s also when they’ll bring forth new hardware products, such as the Huawei Watch 3 and the Huawei MatePad Pro 2. The latter has just been leaked via an official poster, which exposes its overall design and a Mac-style dual dock bar.

The first thing I noticed was the slimmer bezel of the screen, plus the square back camera module. The device also has a keyboard attached and comes with a new generation of M-Pencil. Of course it will run on HarmonyOS, but with a twist. It has a special dual dock bar at the bottom showing apps open in the background, plus the latest apps you used. It’s a bit like iPadOS and there actually were rumors saying that the likes of Xiaomi and Huawei would fork their OSes into spinoffs like iPadOS. Thus we’re expecting a HarmonyOS for tablets and MIUI for tablets.

Earlier leaks regarding the tablet mentioned a 12.2 or 12.6 inch screen with a 2K resolution, plus things like a Kirin 9000 or 9000E processor, 8 GB of RAM and 120 Hz screen. It could be an OLED, AMOLED or simply an LCD. Mini LED would be nice, but I’m not sure Huawei can have it supplied at this time. I’m also expecting at least a solid dual back camera and a 5G version. Quad speakers would also be nice and wireless charging for the back side too.