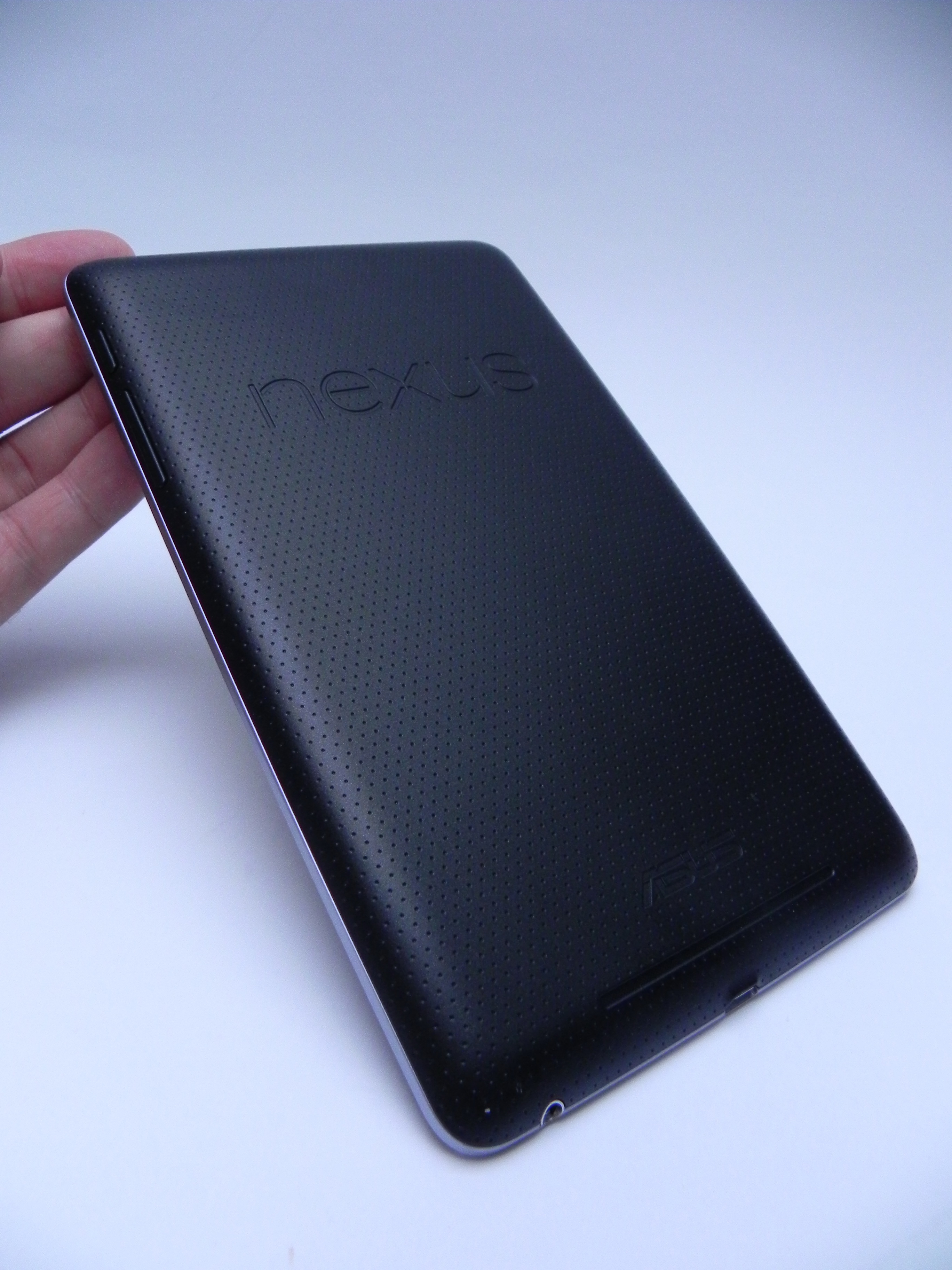 Google Nexus 7 is the most famous tablet of the moment, that’s for sure, a fact proved by both the discussions it causes and also by its sales, that are bound to have hit some millions by now. Google predicted it would move 8 million units this year alone and I honestly think they can reach that mark, considering the product only costs as low as $199 in the 8 GB version. The 16 GB one is $249 and we reviewed the Nexus 7 right here for you! 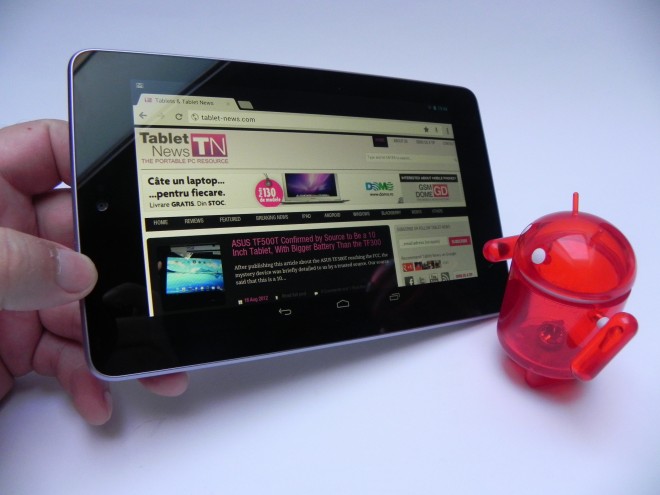 Made by ASUS and Google, this slate was unveiled at Google I/O 2012 early this summer with Android 4.1 Jelly Bean. It’s a 7 inch slate with a quad core CPU and it feels like a genuine companion for the owner of an Android smartphone. It perfectly complements and extends the use of the Android handset. As far as the design goes, we’ve got a rubbery back with a very nice and grippy texture, a big speaker at the bottom and the ASUS and Nexus logos easily distinguishable. No back camera here, instead we get a front shooter, a 1.2 MP one that does 720p capture.

Around the edges there’s a metallic ring that gives an extra solid feeling to the tablet and one thing I noticed fast was the amount of space left unused above and below the screen (in portrait). The device weighs 340 mm and measures 10.5 mm in thickness, so it’s on the light side of tablets. It’s made for portrait use more than landscape, a fact proved by the orientation of all home screens, that is kept portrait at all time and you can only turn it to landscape with a special app, if you want to. 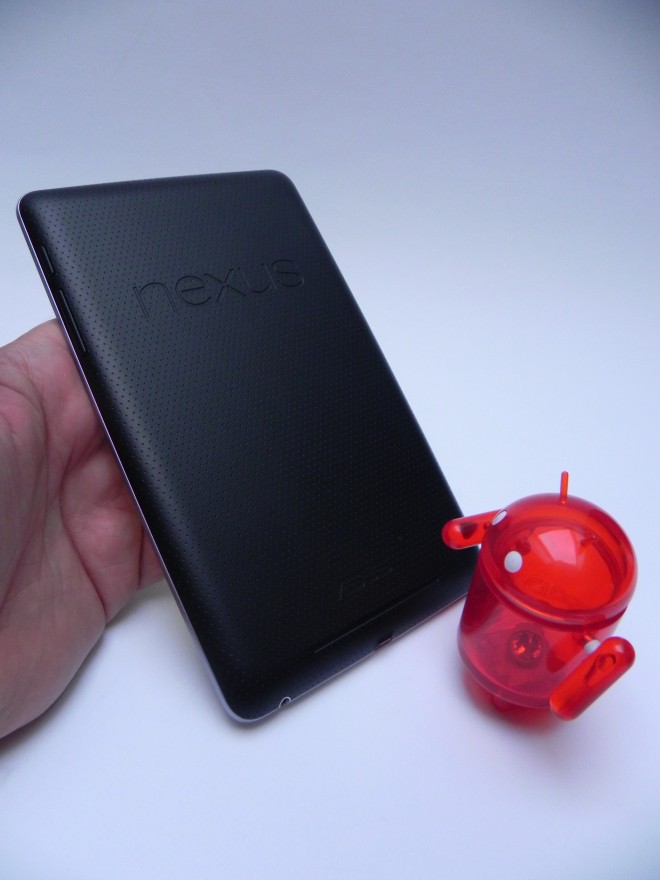 Trust me, you’ll get used to the portrait thing, especially considering any other app on the device works just fine in landscape, so the only time you get portrait is in the home screens area. Inside the device there’s a quad core Nvidia Tegra 3 1.4 GHz processor, 1 GB of RAM and upfront we’ve got a 7 inch IPS display with 1280 x 800 pixel resolution and 216 ppi. For comparison sake the Retina Display of the iPad 3 offers 264 ppi, so this is not a bad performance at all. There’s no microSD card slot on board and no camera, these being the primary and only lacks of the slate.

Of course, some people regret the lack of a 3G version, but that’s rumored to be in the making. Nexus 7 has Bluetooth and NFC, GPS, an accelerometer, gyroscope and makes good use of that ULP GeForce GPU, as games like The Dark Knight Rises have shown us. At the bottom we have a microUSB 2.0 port that will handle charging and data transfer. The battery inside the Nexus tablet is a 4325 mAh unit, good enough for 10 hours of fun. The bag thing here is that it takes 4 hours to charge the tablet from 0% to 100%, which is quite a lot. 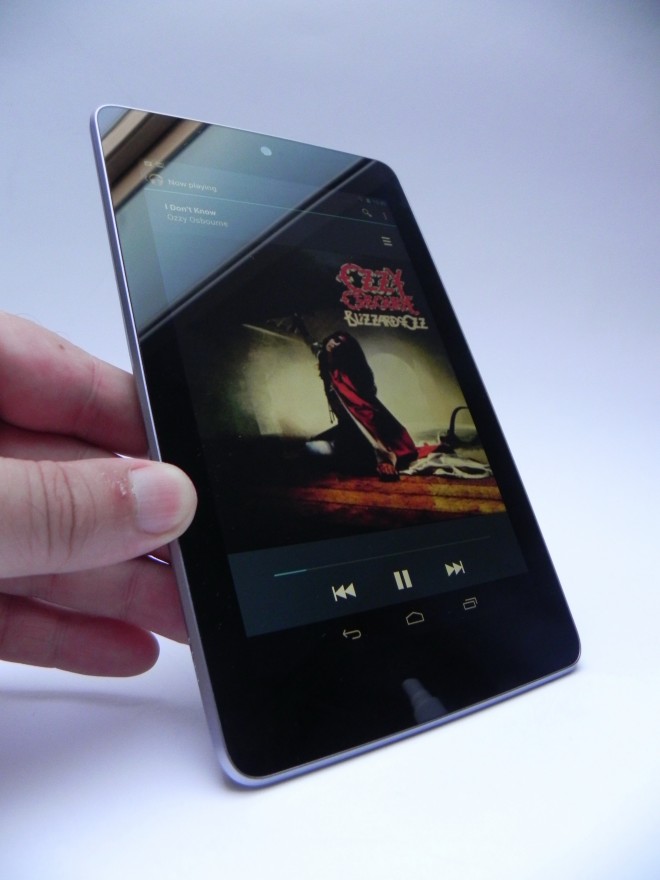 On the OS side of things we get Android 4.1 Jelly Bean with the enhanced notification system, that’s now more complex and detailed, plus the auto resize widgets, Google Now and its cards, Project Butter and its 60 FPS speed and the newest app versions, including a preinstalled Google Earth. Chrome is now the standard browser on this version of Android and the virtual keyboard is quite comfy on the Nexus 7, I have to say. Moving on to the media, the audio quality and bass are very good, while the video is bright, crisp and offers good viewing angles.

As far as benchmarks go, I compared the Nexus 7 with the ASUS Infinity Pad, Pad 300, ASUS Transformer Prime and PadFone. Those are all quad core Tegra 3 models, aside from the PadFone of course. Let me start with a comparison with the iPad 3, that scores a little past 100k points in Browsermark, while the Nexus 7 gets 123k and the Galaxy Note 10.1 gets 166k. Anyway, know that in Quadrant we scored 3656 points, compared to the 4600 of the Infinity Pad, 3700 of the Pad 300, 4100 of the Prime and 5000 of the PadFone, so we’re in the range of the Pad 300 rather than the higher end models. 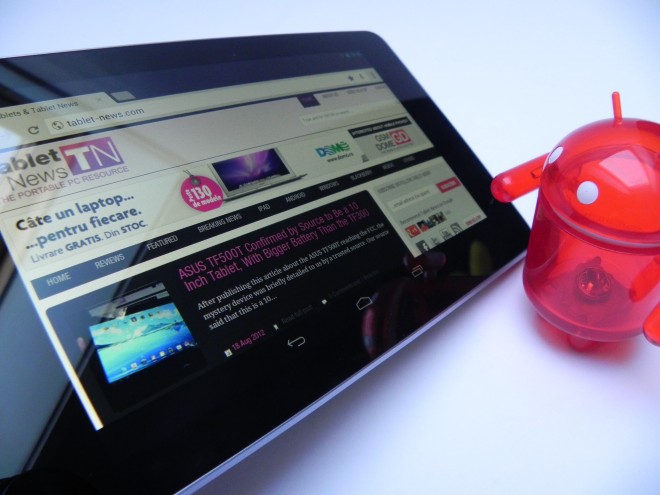 On the NenaMark 2 test we got 55.8 FPS, aided by the smaller diagonal, no doubt. Meanwhile, the Full HD Infinity Pad gets 34.6 points because of the huge resolution and the Pad has 46 FPS to show off. The PadFone has a crazy 60.4 FPS, but that’s all Snapdragon S4 power. Finally, in Vellamo we got 1733 points on the Nexus 7, surpassing, the Infinity Pad and its 1400 points, but not beating the PadFone with its 2400 points. We got a good experience out of this tablet, with the Google Now feeling snappy, the entire UI being very fast and responsive and Google Earth 7.0 moving incredibly fast on this system.