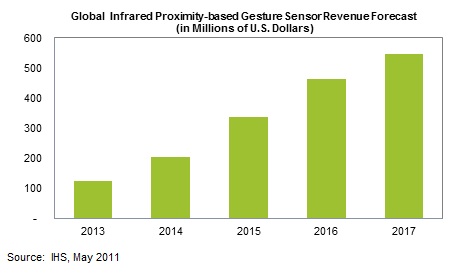 The evolution of technologies like gesture-based control and proximity interaction with handsets and tablets is causing a profit increase for the makers of sensors involved in the operation. Samsung is at the helm of this evolution, with the technologies they’re including on the Galaxy phones and tablets.

The revenue for proximity-based gesture sensors is projected to reach $123 million this year alone, a huge evolution from the $42,000 achieved in 2012, according to IHS. The main application of gesture sensors is the area of wireless devices, then consumer electronics and automotive. The growth will happen during the next years, with a jump of 68% between 2014 and 2015.

The gesture solutions on the market come in two versions: capacitive and infrared proximity. Such sensors can detect movements in 2 or 3 dimensions and recognize hand swipes, much like the gestures used on the Galaxy S4. Tablets have yet to jump on this bandwagon totally, but they will between 2014 and 2017, according to experts. They will get more gesture packages spread all over the huge display.