It has become a habit for customers who own LTE devices to get the latest update from the manufacturer only weeks or even months after the International version gets it. The Samsung Galaxy Note 10.1 is now one of the most popular Android tablets, featuring special features characteristic to the Korean manufacturer’s Note lineup.

Samsung has begun providind OTA files for their flagship Android tablet, the Galaxy Note 10.1, to push the software version up from 4.0.4 to 4.1 – Jelly Bean. Unfortunately we aren’t talking about quite the latest version of the OS. That would be Android 4.2, featured on another Samsung tablet, the Nexus 10.  Meanwhile, the 4G LTE variant of the Galaxy Note 10.1 will get Jelly Bean, along with lots of new features and a new performance standard.

The Jelly Bean update for the Note 10.1 also brings some manufacturer specific new functions, most already available on the new Galaxy Note 2 – smartphone/phablet. Among these there is the Multi-Window – feature that splits the display into two panes, allowing two apps to be accessed simultaneously. The update also brings the newest network standard – called VoLTE or voice over LTE – enhancement to traditional LTE, which would normally drop a data connection when a voice call was being made. Initially the new software version is to be out across three South Korean carriers. 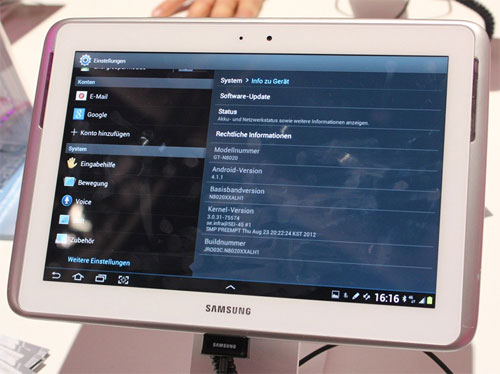