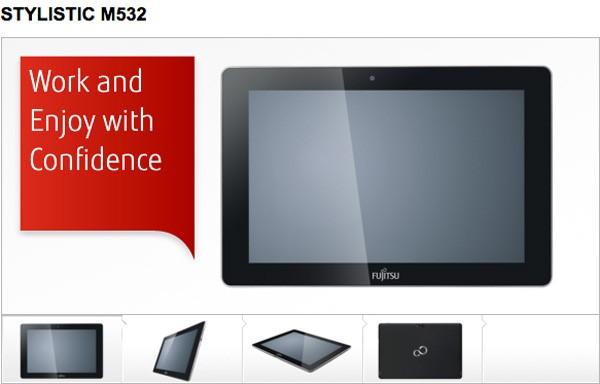 The guys at the FCC have a new tablet on their hands, this time one that looks more like business class than entertainment. The device is the Fujitsu Stylistic M532 and it appeared in the FCC database already. This product is a 10.1 inch Android tablet, with all the required specs for a WiFi only slate.

It supports wireless a/b/gn protocols, Bluetooth and runs Android 4.0 ICS. Also on board there’s a 3,170 mAh battery, that doesn’t impress me, considering I’ve seen 9000+ mAh batteries on Acer tablets. Still, the size of the battery in the case of this Fujitsu model is pretty big and apparently that’s done to fuel the Tegra 3 CPU under the bonnet. No idea when this product will arrive and if it will ever reach the United States, for example.

Nice to see someone else that’s not Acer or ASUS coming up with a quad core tablet. These days you can’t even tell if these Tegra 3 models are featuring Android or Windows RT, but at least in this case it’s Android. Frankly. I’d imagine Fujitsu as more of a company that puts out business class Win 8 tablets.