ASUS has been in the news a lot lately, because of its many tablets and related devices, so why now check out a new one? This mystery ME172V ASUS tablet has been confirmed by the photo data of a picture taken with its camera and posted on the interwebs.

This could be a low cost model, that could be destined for the Chinese market, with a price tag between $99 and $150. Why do we say that? Rumors claim that the ASUS ME172V model will have a 7 inch display, a cam at the back that may lack a flash and supposedly a VIA-based platform with WonderMedia CPU. Last I heard, the ASUS ME172V was rumored to be an economic Nexus 7, with a $99 price tag, so is this camera actually the front one?!

There was a benchmark leak of the same device a while ago, with Android 4.1.1 on board. It was GLBenchmark, in case you’re wondering and it confirmed the presence of a Mali 400 MP GPU and a 1 GHz CPU, plus 1 GB of RAM and 8 GB of storage. The resolution of the 7 inch screen is said to be 1024 x 600 pixels and the battery a 4270 mAh unit. 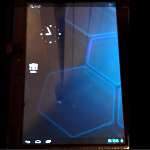