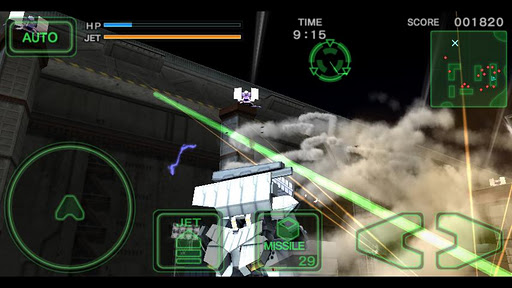 If you’re looking for an old school mech battle game, you may want to try the free version of Destroy Gunners SP. We tested it on the ASUS Infinity Pad TF700 tablet and obviously the game looked hot, with 3D graphics and fast paced action. The title was last updated in July and it requires Android 2.2 and up.

You control a big robot, a Gundam if you want, who will fight aerial units, tanks and turrets, without a clear purpose or storyline. In order to complete missions, you need to destroy numerous enemies using rockets, a machine gun or brute power. The player can customize the weapons on the robot and reinforce the robot, with superior hardware.

There are many types of robots available and the customizable robot system allows you to create your very own mech and play with it. The title integrated the OpenFeint ranking and score system and you can compare your scores with players all over the world. The robots are massive and they’re easy to control with the on screen buttons, that even allow you to lift the mech up in the air. My only objection is that the controls feel a bit too big for the screen. You can get the from here and we give it a 7 out of 10.

IFA 2017: Lenovo Home Assistant is a Smart speaker With Alexa,...