We have reviewed our share of Chinese tablets, including Chuwi models and most of them make some compromises that people may or may not live with. Chuwi Hi12 is the latest such model and it stands out through the fact that it makes very few compromises, to the user’s benefit. This one is a dual boot tablet with a 12 inch screen and a price of $259. 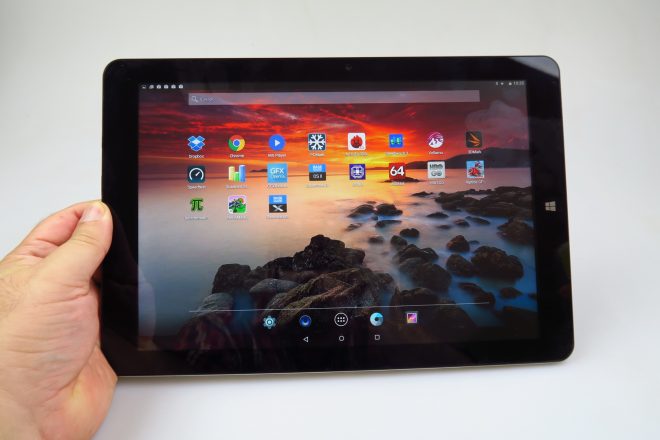 This is a media consumption device, with Android and Windows 10 on board and also able to become a genuine laptop thanks to an attachable keyboard. Design-wise, we’re dealing with a huge device, that has a metal body, big bezels and it may tire your hands. It measures 8.9 mm in thickness, which is pretty slim for an otherwise massive device.

It weighs a hefty 852 grams, has a solid build and in spite of that we found that the front panel tends to creak a bit. We’ve got rounded edges here and this device feels a bit like a “laptop lid”, as I like to call such behemoths. The facade is a fingerprint magnet and at the bottom we’ve got connectors for the keyboard.

It’s a comfy device for it size, with OK button feedback and an elegant speaker design. It’s available in black or white, has a matte back and it offers an OK quality for the price. The screen is a 12 incher, an IPS LCD with a 2160 x 1440 pixel resolution and a 3:2 aspect. Turns out this is the very same panel from the Surface Pro 3.

The viewing experience involved solid brightness for indoor usage, OK colors, wide view angles and overall the panel is great for movies. Pixels are of the RGB Stripes variety and our luxmeter test revealed a value of 304 LUX, which is rather OK, especially since it surpasses 90% of the models from China in that regard. It surpasses the ASUS Transformer Book T100 Chi, but scores below the Xiaomi Mi Pad by only 6 LUX and below the Nokia N1 by 51 LUX.

Settings for the screen on Android include brightness, font and there’s also Intel Smart Video, for a smoother playback. Overall an OK screen for the price, I have to say. Moving further to the rest of the hardware, we find an Intel Cherry Trail Z8300 (Intel Atom Z5) processor, which is a quad core 64 bit unit, clocked at 1.44 GHz and based on 14 nm technology.

It’s not exactly the greatest or latest CPU, but it does its job. The GPU is Intel HD Graphics Gen 8 at 500 MHz and we also get 4 GB of RAM and 64 GB of storage among the specs. There’s also a microSD card slot with support for up to 128 GB of extra storage, by the way. The device doesn’t have lag per se, since Android runs smoothly, but on Windows, apps take a while to start up. 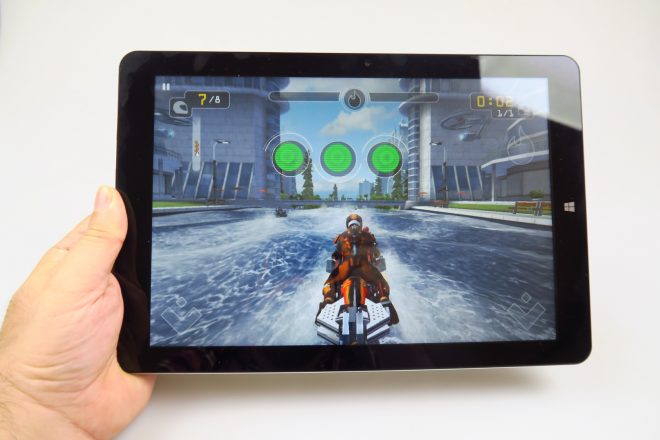 Some of them even got stuck, even Microsoft Edge. The gaming is handled pretty OK, at least when it came to our benchmark game, Riptide GP Renegade. Benchmarks were reasonable and that’s it, with AnTuTu 6 placing us above the Cube i7 Remix, while 3D Mark Ice Storm Unlimited generated a result superior to the one of the Galaxy Tab S2 9.7, but also below the Nokia N1.

In BaseMark X we even surpassed the iPad Air 1, which is not a bad feat at all. The temperature was in reasonable limits, even after running the game Riptide GP Renegade, reaching 34.3 degrees Celsius. After the intensive benchmark GFXBench we only got to 31.9 degrees Celsius, which is also pretty cool. Since we detailed hardware, you should know that on Android you get 9.72 GB to play with, while on Windows 10 there’s 44.3 GB.

The battery inside this 12 incher is a 11.000 mAh/3.7 V unit, that on paper provides 4 hours of video playback. The charger on offer here is a 5V/3A/1.5A unit, just so you know. The video playback test we did brought us to 7 hours and 24 minutes, which is good compared to other Chinese models and surpasses the Cube i7 Remix for example.

It’s still below the Galaxy Tab S2 9.7 and its 10 hours and 45 minutes, though. The PCMark test revealed a value of 6 hours and 40 minutes, which is quite solid  and superior to the Cube i7 Remix and Chuwi Vi8. It’s also inferior to the Xiaomi Mi Pad 2, by the way. Charging is done in 4 hours and 27 minutes, which is a lot of time, but at least it’s worth it for the other battery achievements. 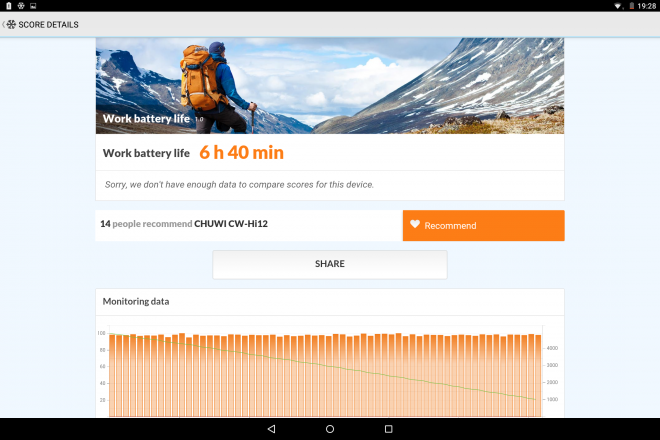 At least it chargers faster than the Allview Viva Q10 model. Settings include the usual Battery Saver from Android and the usual idle time/brightness settings fro Windows 10. On the audio side of things, we relied on Play Music on Android and Groove Music on Windows. Play Music has a stock EQ, with genre settings, 5 acoustic channels, bass boost and surround options.

The acoustic experience involved a very loud sound, made by stereo speakers, but the lack of bass was obvious. The sound felt a bit broken, but in general it was reasonably clear, crisp and above most laptops when it came to volume. Our decibelmeter showed a value of 89.5 dBA, just a smidge below the Nokia N1’s 89.8 dBA, our first placed slate till the Huawei MediaPad M3 came along.

It also beats all iPads, by the way and it’s great for movies. On the camera front we get a 5 megapixel back shooter and a 2 MP front one. Options are pretty standard, like a timer, aspect, grid, digital video stabilizer and such. The captures are nothing to write home about and this is certainly no iPad. Focus is slow and so is the zoom and picture taking speed.

The results are grainy, but the colours are decent. On the web browser front, we met with a slow browser on Android, but an Edge that was a bit faster on Windows. However, even Edge got stuck at some point and laggy. The virtual keyboard felt comfier on Windows to tell the truth. As far as connectivity goes, there’s a set of full size USB ports here (USB 2.0 and USB 3.0), a micro HDMI port, WiFi b/g/n, microUSB and audio jack.

We’ve also got a microphone and special keyboard connectors at the bottom. You can attach an USB drive to the USB ports, mice, keyboards and more. There’s also external 3G dongle support and our SpeedTest showed a reasonable value of 21 Mbps in download and 18 Mbps in upload for WiFi. On the OS front, we get Android 5.1 Lollipop and Windows 10.

You can switch between them with one tap of a virtual button and I find it strange there’s no Marshmallow here. The Android experience is stock, with a carousel for multitasking, dock area with apps at the bottom and a swipe down brings forth the notifications and quick settings. The widgets are all stock ones and there are no special settings here.

Windows 10 brings Cortana, Groove Music and Xbox Live, as well as Maps and the option to use multiple desktops it needed. There are folders available and the option to install .EXE apps. We’ve got Skype here, Office apps, Edge as the browser and a typical Start menu. This OS is clearly slower than Android and an important thing to mention is that Windows 10 can’t be reinstalled from recovery without bricking the tablet.

There’s a way to solve this, by using the official Android and Windows images from the Chuwi forums. Now that everything is said and done, I guess it’s time for the verdict. 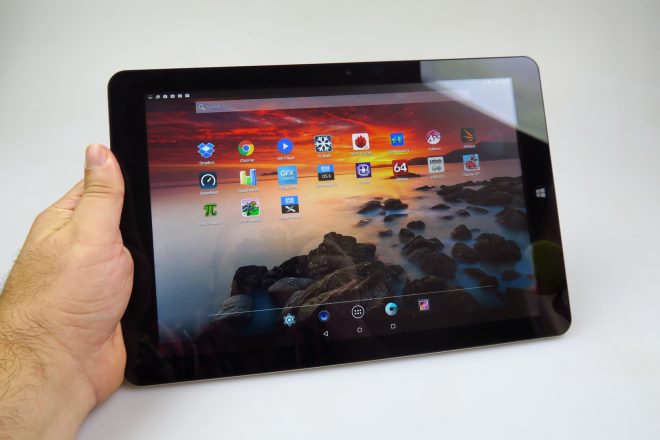 Chuwi Hi12 is one of the brightest tablets from China and once you dock it onto a keyboard you get a solid laptop replacement, one that’s great for watching videos and playing games. You can also keep the tablet next to the PC and use it for a bit of Netflix binging. The battery is quite good and aside from using the slate next to the PC you can also make it work in the living room.

You can find the product at GearBest.com, priced at $259, which is quite a good deal.