In November last year, out of nowhere came the news that a Snapdragon 855 phone had been launched. It was also a foldable phone and it didn’t look half bad. It was dubbed FlexPai and came from the company Royole. Now Engadget was present at CES 2019 and took it for a spin there.

It took a while for the product to reach North America and it still feels very much like a prototype, to be honest. In spite of that the device is already up for purchase. The folding action seems a bit rigid, but I suspect that after a few uses it’ll become more natural. Royole has been working on flexible screens since 2012, so they’re not exactly new in the field. 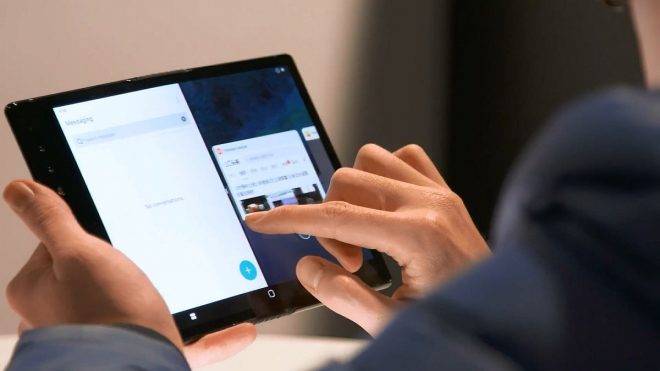 The FlexPai has a Snapdragon 855 CPU and it’s actually the first comercially available device with this chipset. It’s got 6 or 8 GB of RAM, 128 GB or 256 GB of storage and a dual 16 MP + 20 MP back camera. It runs an Android 9.0 Pie special version, that’s tweaked to trigger a tablet mode. The Engadget editor seemed genuinely impressed by how seamless the passage from phone to tablet is.

There’s a 7.8 inch AMOLED screen here, one that folds in half to turn into a smartphone, which to be honest is not very easy to wield. The hinge looks rather massive and feels a bit like the Surface Book or Lenovo Yoga Book hinge. The cameras on the device were poor on the prototype, it seems. So, yes, it needs a bit of work, but this can motivate rivals to go much further.