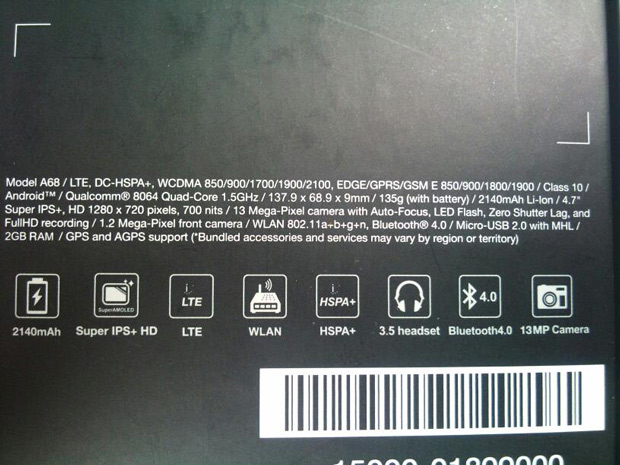 As we’ve barely announced yesterday, ASUS Italy distributed invitations to an Italian press even for the official presentation of ASUS Padfone 2 , the second generation smartphone/tablet hybrid. The event is set to take place thursday, the 16th of October – 2012 in Milan (IT) and Taipei. According to some leaked benchmarks and rumors it is expected that the PadFone 2 will be powered by a quad core Snapdragon S4 Pro chipset with 2 GB of RAM.

Though it cannot be guaranteed that the Padfone 2 is indeed inside, a photo claiming to be that of the new gen Asus hybrid was posted on a a Chinese forum with the title “Padfone 2 specs revealed“. The image is for Product Model A68, considering that the first gen Padfone is model number A66, it is safe to assume that this is indeed the Padfone 2 we are talking about. The specs on the box are in accordance to the recent rumors and leaked info. The device is packing a quad-core Snapdragon S4 configuration with the CPU clocked at 1.5 Ghz. There  is a 4.7-inch Super IPS+ Display, another of Asus’s trademarks, at a resolution of 1280×720 pixels.

The interesting thing about the device’s configuration is the 13MP rear camera with Auto-Focus and a LED flash. It is capable of taking photos at a resolution of 4032 x 3224 in a 5:4 aspect ratio. The camera also features zero shutter lag, for very fast photo taking skills. There is also a huge 2140 mAh battery and the device is LTE enabeled. We are only weeks away from the official announcement (October 16th) and we already know all the important aspects. It’s now a matter of design, OS and specs, something to look forward to.