If you’re looking for a cheaper alternative to the Galaxy Note 3 and you want to jump on the 6 inch device bandwagon, you may like the ASUS FonePad Note FHD 6, that we recently reviewed in detail. The device was shown at IFA 2013 in early September and it’s a 6 inch phablet with stylus included. 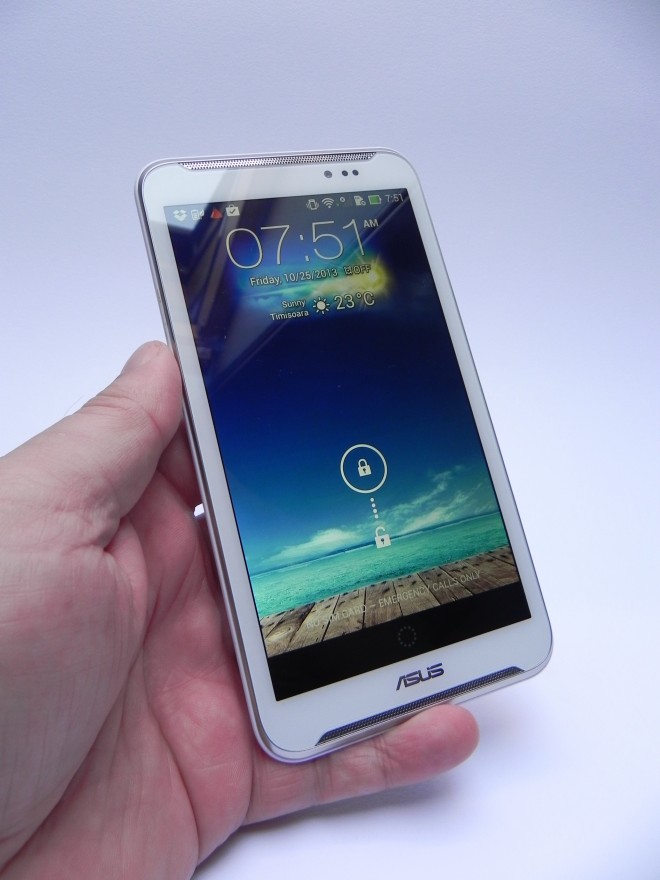 The product is priced at around $550 and it’s the kind of phablet that’s made for youngsters always on the move. The device features a plastic case and sadly the back feels plasticky quite a bit. This model is bulky and it measures 10.3 mm in thickness, plus it weighs 210 grams. The physical buttons have good feedback and the product is available in two color versions: black or white.

Upfront we’ve got upper and lower side speakers, while on the top front we find the sensors (proximity and light) and front camera. The device features a solid metal frame to keep everything together, unless it’s a plastic that imitates metal, in the Samsung way. On the side we also find a lid covering the microSD and microSIM slots and luckily that lid doesn’t feel fragile. 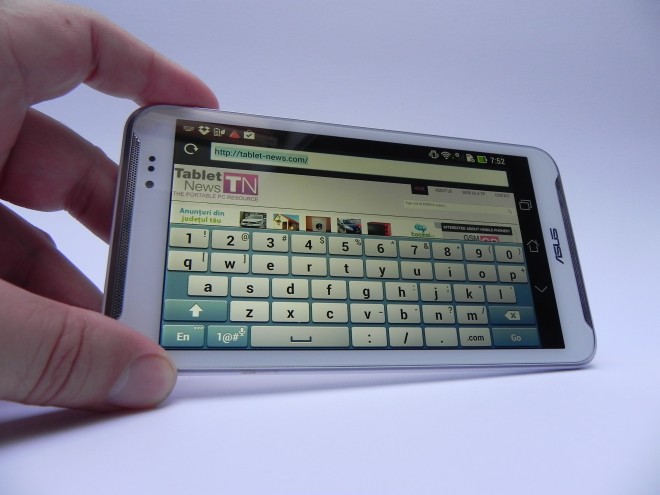 At the top we find the audio jack, while on the back there’s the 8 MP camera with a metal ring around the lens. The stylus is embedded into a back slot and at the bottom we find a microUSB port and a microphone. Overall, the design is slightly slippery and glossy, but the unibody design is well built and feels resilient, apart from the creaking back area.

Also, it takes a while to get used to the 6 inch format. As far as hardware goes, we’ve got an Intel Atom Z2580 dual core 2 GHz CPU, a Clover Trail Plus unit with a PowerVR SGX 544 MP2 GPU at 533 MHz. The display is a 6 inch IPS Full HD unit, with 380 nits of brightness and 367 ppi density. The screen is scratch resistant and features an anti fingerprint coating. 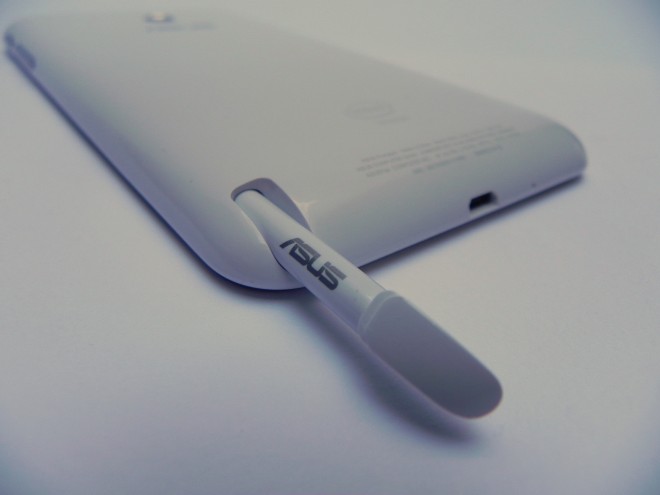 On the memory side, we get 16 or 32 GB of storage, a microSD card slot and 5 GB of ASUS WebStorage in the cloud. ASUS FonePad Note FHD 6 packs 2 GB of LPDDR2 RAM and it also comes with WiFi, Bluetooth 3.0, WiFi, WiFi Direct connectivity, Glonass, GPS and 3G. This phablet integrates an 8 megapixel back camera with BSI and no flash, while upfront there’s a 1.2 MP cam.

Other specs include an accelerometer, proximity sensor, ambient light sensor, gyroscope and compass. The battery is a Ly-Polymer unit with a 3200 mAh capacity and on paper the battery offers 498 hours of standby, 26 hours of talk time, 10 hours of WiFi browsing or 7 hours of video playback. In our test, that involved Full HD video playback with WiFi on and brightness at 50% we achieved 6 hours and a half of continuous playback, close to the ASUS promise.

The battery charges in 2 hours and a half and overall you should get a day of regular use out of it. There’s a battery saving option in the settings area, with various options as shown in the video review. Moving further to the multimedia experience, the device integrates stereo speakers with ASUS SonicMaster technology and featuring the work of the Bang & Olufsen team.

For some reason, the upper speaker is louder, but it may just be the sample unit we got. The voice is pretty clear when playing songs and the bass is just OK, but not excellent. The volum is medium let’s say, not loud enough to impress. The clarity is also pretty good and by the way, the headphones bundled here are comfy and give you good bass and good clarity. 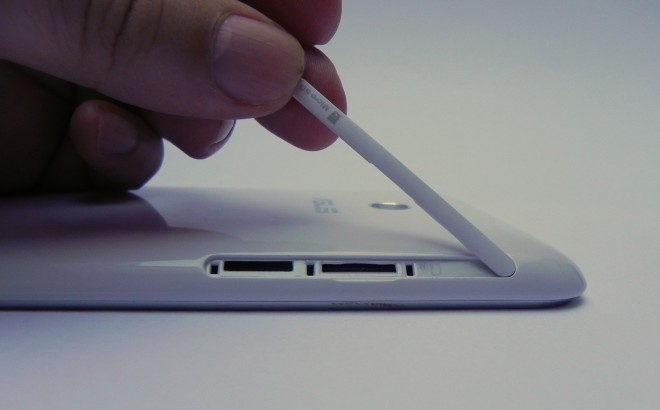 Audio Wizard allows you to work with 5 presets for tunes, boosting frequency response in some vital areas. We’ve also got FM radio included here and overall the audio experience is below the HTC One and its BoomSound goodies, if you want to compare devices with two front speakers. On the video side, the ASUS FonePad Note FHD 6 packs a Full HD IPS screen with Full HD res and 367 ppi density. This is a LTPS LCD (low temperature poly silicon), that means lower power usage and thinner panel.

The screen offers 178 degree view angles, the pixels are of the RGB Stripe kind and the brightness is at 380 nits. The display behaves well in sunlight and contrast is good. Colors are vivid, there’s no oversaturation and you can tweak the experience with a special Reading mode in the settings area. That tweaks the color temperature in some apps that you’ll select. 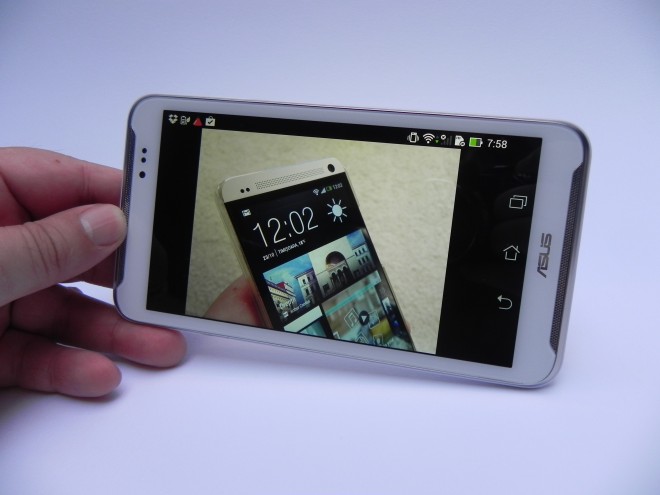 You can also customize the viewing experience using ASUS Splendid, that allows you to modify color temperature, saturation and nuances. Overall, this is a good screen, so no objection here. As far as the camera goes, we’ve got an 8 megapixel sensor with BSI, F/2.0 aperture, autofocus and a Sony sensor inside. The device can take pics while taking videos and it’s able to do burst captures at 6 FPS.

The UI is the same as the one of the ASUS Transformer Pad TF701T, a new generation of ASUS UI, that feels right at home. We’ve got effects to play with and settings include white balance, ISO, exposure, noise reduction and more. You can film in Full HD, as shown in the sample below and there are a bunch of photo modes to look out for: HDR, Beauty, GIF, Smile and the video includes a Time Lapse option.

The photo samples you can see here show good clarity, but there’s a slight white-ish hue applied on top of them. The HDR actually enhances that in an even wore way. The panorama looks decent and colors are pretty vivid without being oversaturated. The performance of the camera is on par with the ones on older Transformer Pad slates, if you really want a comparison.

The interior shots have to deal with a lot of noise sadly. As far as video goes, the quality is lost greatly when zooming in and this also suffers from what extra white hue on top, but kudos to ASUS for offering good focus here. Overall the camera is not the best and I think it’s inferior to the one of the Nexus 7 2013, which is a 5 MP unit. 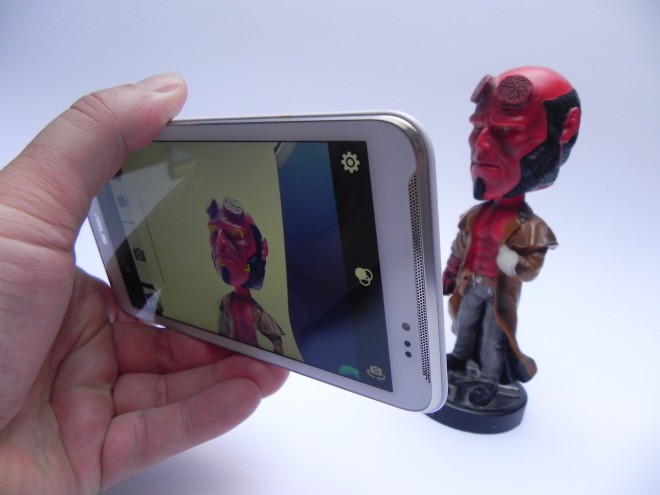 On the software side we’ve got Android 4.2.2 and if you want to know, after some dozens of minutes of video playback, the plasticy device won’t get hot, so no problem with temperature. The call quality is decent, but I would recommend a headset, since this is a massive phone. The web browser is reasonably fast, text is crisp on screen and scrolling is smooth.

On the benchmark side, I decided to compare this phablet to the Samsung Galaxy Note 2, since even ASUS does that in its official press releases. The ASUS FonePad Note 6 scores 7352 points in Quadrant, beating the Note 2 by 1300 points and 21.152 points in Quadrant, almost doubling the score of the  Note 2. It also scores 60.3 FPS in NenaMark 2 and 1973 in Vellamo, yet again surpassing last year’s Note with 58 FPS and 1845 points in Vellamo. 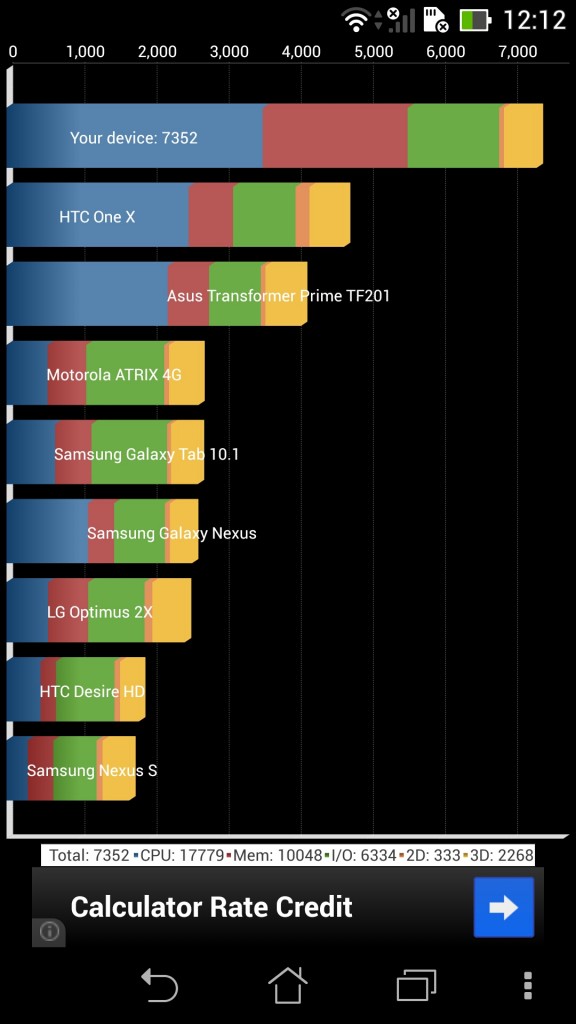 Finally in 3DMark we scored 7300 points, compared to the strangely low score of 2900 points that Note 2 achieves. As far as the stylus is concerned, this one has a special reminder set to activate when the pen has been out for 5 minutes and not used. The stylus also works 10 mm away from the screen and when you remove it from its slot, you’ll see a special blue symbol on the side of the screen.

That’s the Instant Page, that allows you to draw, write, doodle and use shapes on top of any background you want, from web pages to pics and homescreens. The stylus has special setting sof its own and you should also know that this pen comes with a button on it. Said button can be used to draw a circle or other shapes to cut clips out of the screens. You need to keep it pressed to do that. 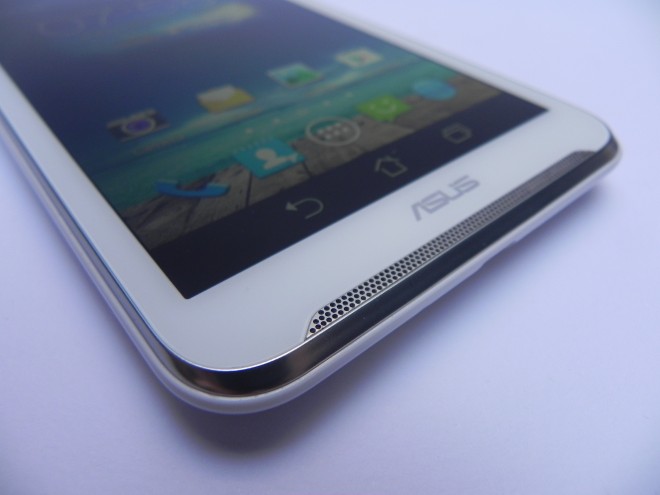 SuperNote is a major app for stylus interaction here, as it activates in widget form when you pull the pen out. There’s handwritting here, shapes, all sorts of brushes, colors and options to implement stuff from the clipboard, including audio, video, stamps of all sorts and other items. The SuperNote experience is the same as we knew it, but with pen input related this time.

You already know the new ASUS UI from the TF701T, with a new set of icons and flatter look, so nothing new here. The apps are also very familiar, including App Backup and Locker, Kindle, Dictionary, File Manager, Flipboard, Parental Lock and Polaris Office. There’s ASUS Story for collage creation, Tasks, ASUS WebStorage with support for file editing on the go by multiple users and finally Zinio.

And now it’s time for the big pros and cons related to this device. Here are the Pros:

Acer Iconia A1 Gets Handled During New York Event (Video)