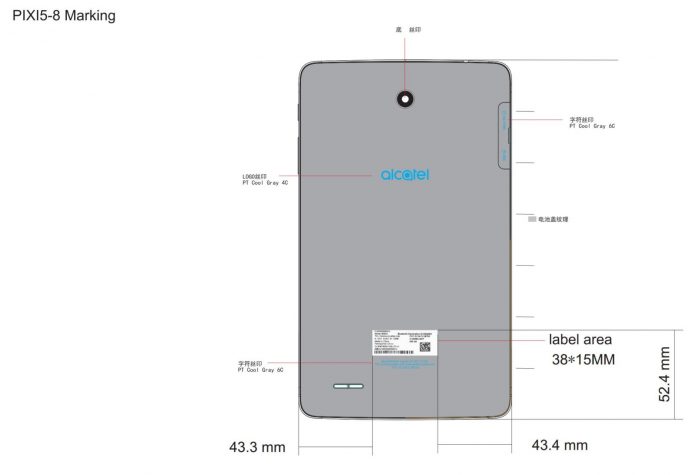 There’s a fresh Alcatel tablet in town, the Alcatel Pixi 5 model supposedly, that’s just been certified by the FCC. Codenamed 9024O, this device hit the authorities from USA, as hinted by a few documents popping up on the web.

As you know, Alcatel patents and products are under the wing of TCL, so they’re also taking care of the patents. The testing documentation reveals some sketches associated to the product, that show a microSD card slot and a SIM tray, meaning we’ll get 3G and 4G on the slate. The tablet is going to be LTE-enabled and it’ll support CDMA and GSM bands.

Alcatel 9024O may come in gray, as hinted by the sources of the leak and it appears it’s going to be bring a 4000 mAh battery (non removable). The sketches reveal the dimensions of 100 mm wide and around 180 mm tall, so we’re dealing with a 7 or 8 inch model here. A reference to the “PIXI5-8” name was also found in documents, so this may well be a follow-up to the Alcatel Pixi 4 launched in the summer of 2016. That product was an entry level Android tablet, with a MediaTek MT8321 CPU inside and 1 GB of RAM.

We expect a doubling of the RAM and more processor power inside. Alcatel has yet to detail the product, but it may happen at IFA at the latest.