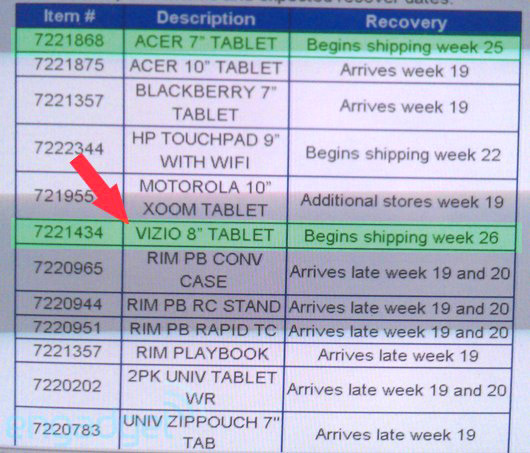 Engadget has received a tip recently, that included a Walmart schedule table, showing the 8 inch Vizio tablet among others. This model is priced at $349 and it’s shown as shipping in week 26, meaning that it will come to the retailer’s portofolio in a month and a half from now.

The same table shows an Acer 7 Tablet, codename for Acer Iconia Tab A100, that will arrive a week before the Vizio 8 incher. The Tab A100 was spotted at the FCC in early June and it’s expected to come in Q3 or July, after being shown at Computex 2011 with Honeycomb on it. Pricing should be around $449 to $499.

As far as the Vizio model is concerned, this will be a Honeycomb device, with a 1GHz CPU, a front camera, WiFi, HDMI and 3 speakers.