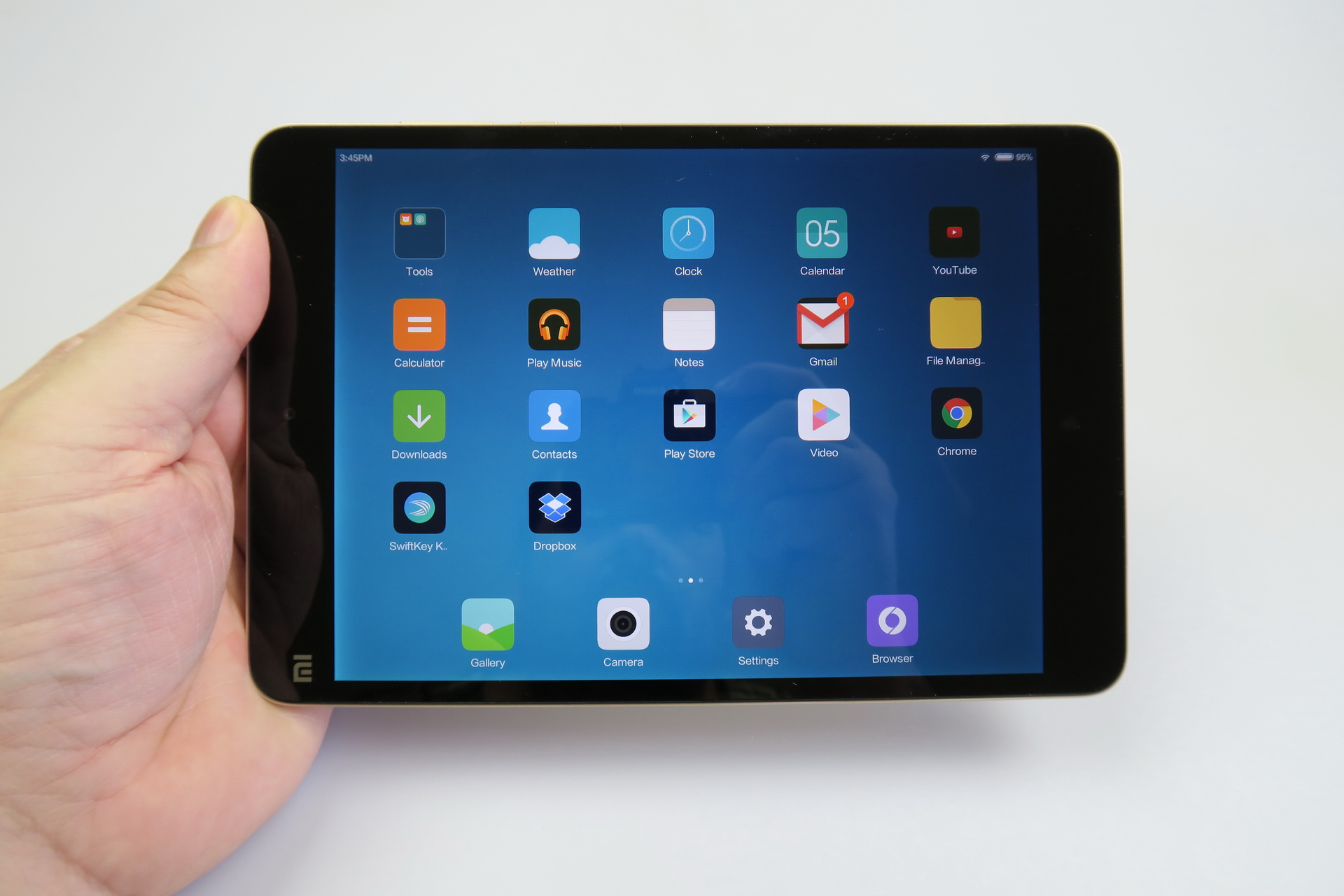 The Xiaomi Mi Pad 2 is a tablet we played with earlier this year and a 7.9 inch slate that’s perceived as an iPad Mini 4 rival. This model debuted in November 2015 and it’s seen as one of the best tablets of last year. 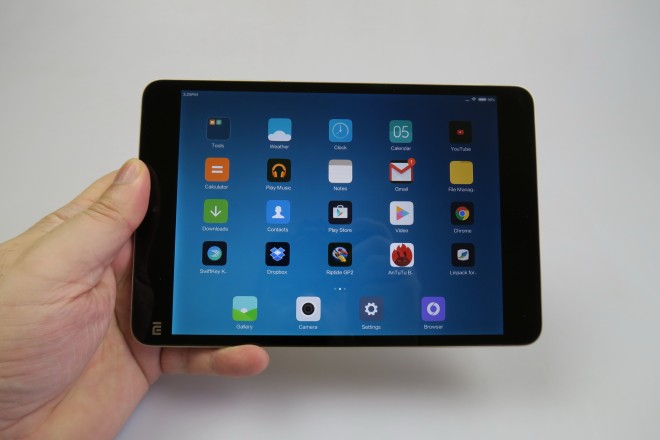 We got it from Gearbest.com, where you can purchase the 16 GB version for $186 and 64 GB version for $258. We already tested the Mi Pad 1, so we have quite a bit of background for the product. What you’re seeing here is the 16 GB Mi Pad 2, by the way. As far as the design goes, the tablet measures 7 mm in thickness and weighs 322 grams.

This makes it thicker than the 6.1 mm iPad Mini 4 and heavier by about 23 grams. However, the evolution is clear if you look at the measurements of the Xiaomi Mi Pad 1 (8.5 mm and 360 grams). Mi Pad 2 is also 2 or 3 mm less long and wide than the predecessor. The device has an unibody aluminum shell that’s matte and offers good grip. 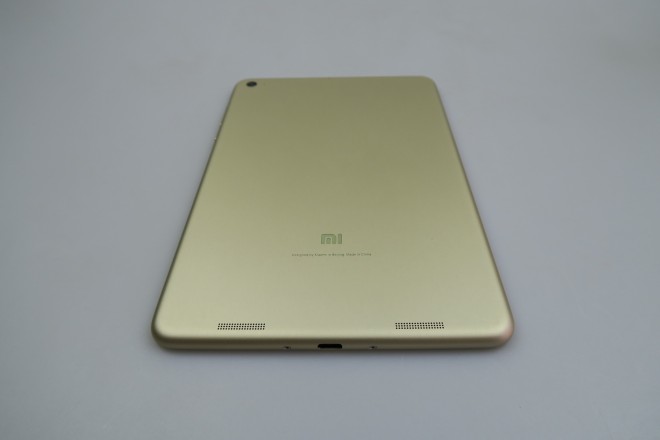 It also feels light and comes in a gold or silver hue. Mi Pad 2 has rounded corners and edges and does resemble the iPad Mini models quite a bit. Upfront we find the selfie camera, a screen with big-ish bezels and overall the panel doesn’t quite attract grease or prints, which is great. Then we’ve got the sensors and 3 capacitive buttons.

At the back there’s the main camera, with a microphone next to it and another mic at the top, plus dual speakers. At the top we find the audio jack, while at the bottom rests the USB Type C port and there’s nothing on the left side. On the right we find the volume buttons and Power button, all of them comfy. The Xiaomi Mi Pad 2 is quite the evolution from the plastic predecessor and we quite liked that. 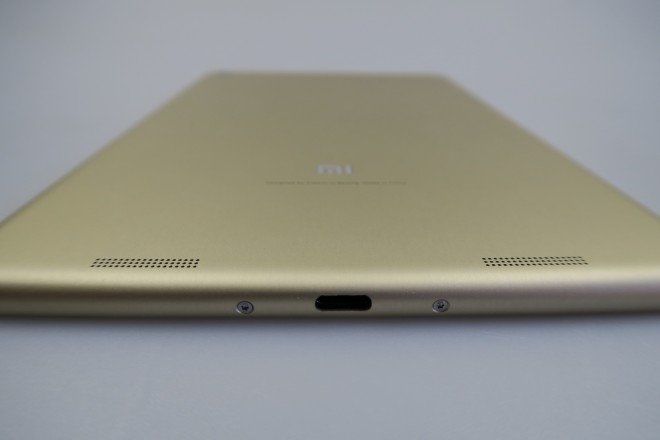 I also found that the USB Type C port kind of cuts into your skin after long periods of holding the device in landscape mode. We move on to the hardware, where we find the 7.9 inch display, an IPS LCD with a 2048 x 1536 pixel resolution and an Intel Atom X5-Z8500 processor, a quad core unit clocked at 2.24 GHz and using 14 nm technology.

There’s Intel HD Graphics technology available, 2 GB of RAM, 16 GB of storage, but no microSD, which is important because the Mi Pad 1 had this feat. At the back there’s an 8 megapixel camera, while upfront there’s a 5 MP shooter. Connectivity is covered by WiFi 802.11 a/b/g/n/ac dual band and we also get WiFi Direct, Bluetooth 4.1 and USB Type C. 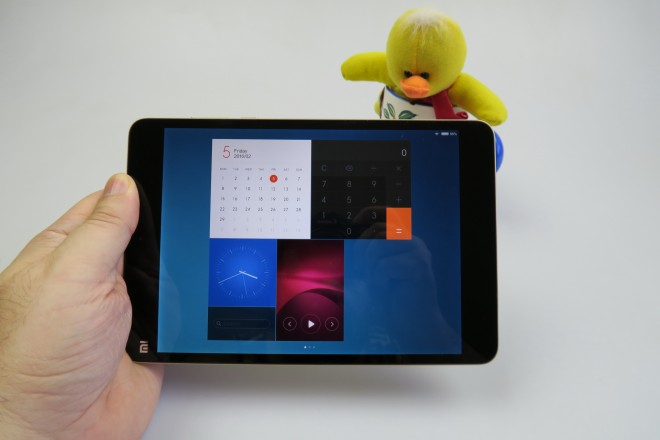 Sensors are accelerometer, gyroscope, compass and finally we also get dual speakers. Keep in mind we were a bit bummed by the fact that we didn’t get any GPS, NFC or a 3G/LTE version of the slate. Also, a 32 GB starting model would have been nicer, especially since it lacks a microSD card. The battery here is a 6190 mAh unit (Li-Po), that on paper provides 100 hours of music, 12 hours of video playback and 648 hours of standby time.

There’s also fast charge (on paper), with 5V/2A charging. In our video playback test, that involves HD video playback in a loop with WiFi on and brightness at 200 LUX, we achieved 6 hours and 5 minutes, which is a bit underwhelming. It surpasses the ASUS ZenPad 7.0 (4 hours and 32 minutes) and the Chuwi Vi 8 (5 hours and 58 minuteS) and the Cube i7 Remix (3 hours and 57 minutes). 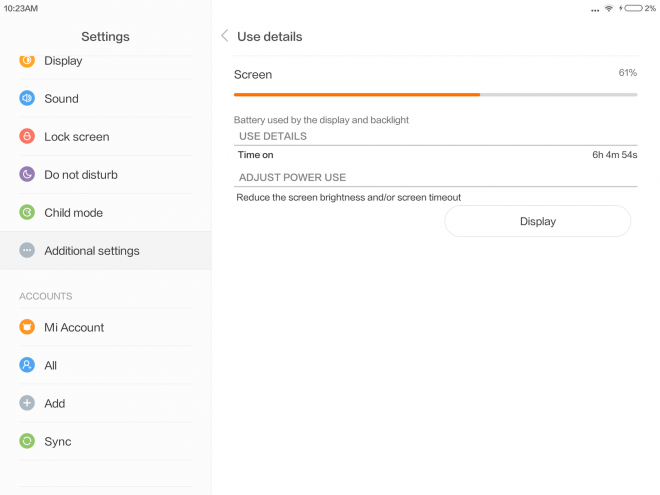 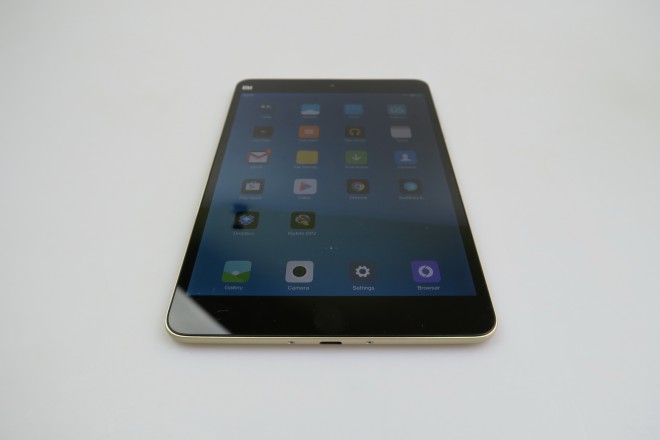 Of course, other slate models manage to charge faster, like the Evolio Go Fun 3G (1 hour and 45 minutes), or Utok Hello 7Q LTE (1 hour and 45 minutes). The Settings include Battery Use, which in turn offers a Battery Saver feature, that reduces performance and limits vibration. It also restricts app battery usage. The main Power options are Performance or Balanced, that determine how many system animations are shown.

I’d say the battery is OK, mostly through continuous usage time, not video playback. On the audio side of things, we’ve got dual back speakers and we rely on Play Music to play tunes. The equalizer features the usual options, like genres and sliders, plus bass boost and surround sound. The actual listening experience involved a loud and clear sound, very powerful bass and nice percution. 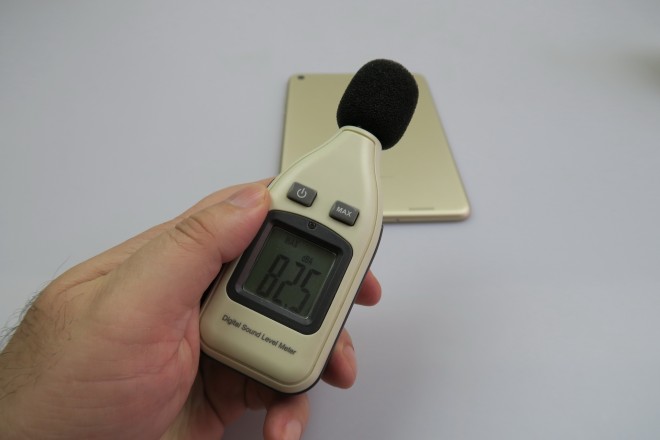 We scored below the Nokia N1 (89.8 dBA), Samsung Galaxy Tab A 9.7 (87.6 dBA) and Xiaomi Mi Pad 1 (84.2 dBA). Settings include special options for headphones and equalizer only for them, as well as enhancing. I’d say the acoustics are a bit below the predecessor here. Now let’s talk about the screen! 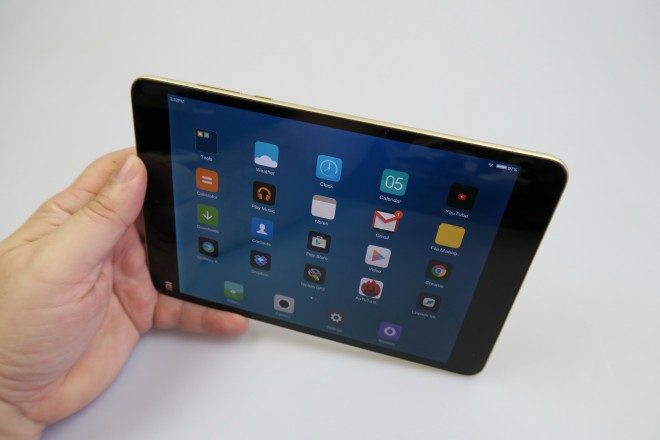 Xiaomi Mi Pad 2 integrates a 7.9 inch IPS LCD with a 2048 x 1536 pixel resolution, pretty much the same panel as on the Nokia N1, Xiaomi Mi Pad and iPad Mini 2, 3 and 4. The video app shows both online clips and those you saved offline and lets you select episodes when need be. Options for the player are volume, brightness, aspect ratio and enhance audio.

The 4:3 format is not ideal for video watching, but the display was crisp, clear and bright, with wide view angles and vivid/realistic colors. Pixels are of the RGB Stripe kind and the brightness level was at 353 LUX, which is just OK. It does surpass the Mi Pad 1 and its 310 LUX, plus the ZenPad 7.0 (274 LUX) or the ASUS Transformer Book T100 Chi (281 LUX).

We’re below the Nokia N1 (355 LUX), iPad Mini 2 (412 LUX) and Samsung Galaxy Tab S 8.4 (432 LUX). I’d say the screen could be brighter. Settings include optimization for light level, Reading Mode with reduced glare (with a list of apps that use this mode) and Colors and Saturation (with a warm to cool slider). Text size can also be selected and while the overall display experience was good, it’s not even on par with the iPad Mini 2, let alone iPad Mini 4. 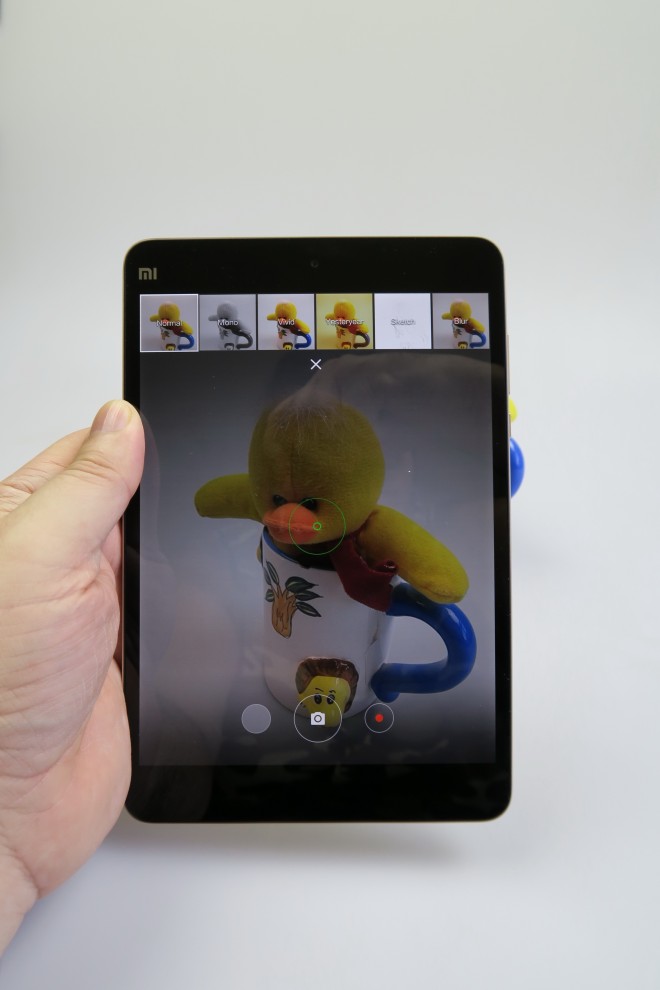 The cameras include an 8 MP back shooter and a front 5 MP sensor. The main one has F/2.0 aperture and does Full HD video, but its associated app doesn’t start that fast. However, focus is fast and the exposure change is also fast. The UI is incredibly simple and only includes the front camera shortcut, audio on/off and skin tones, plus a ton of filters. 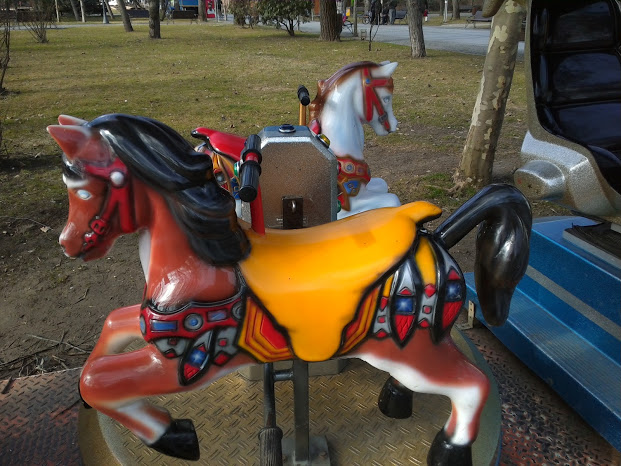 You cam zoom up to 4X and that’s not exactly fluid. Picture taking is also kind of slow. The gallery of shots taken with this device was done on a sunny February day and involved a series of crisp, clear shots, with realistic colors, good focus, good exposure and white balance and nice closeups. Selfies don’t look like much and overall this model was a bit above the Nokia N1 and the Mi Pad 1, but below the iPad Mini latest models.

Video capture is done in MP4, at 30 FPS and 16 Mbps. The first clip was shaky, unclear and suffered from refocusing, but the colors were OK. The second was a bit burnt, but focus was decent and colors were OK. I’d say the audio capture was great, but once again iPads capture better video. Editing is done with crop and rotate options, as well as extras like fisheye, doodle, filters, frames, hue and contrast.

We measured the temperature of the device and got to 34.5 degrees Celsius, after playing the game Riptide GP2 for 15 minutes. There’s no overheating here and we move on to connectivity. There’s WiFi 802.11 a/b/g/n/ac dual band here, WiFi Direct, Bluetooth 4.1, USB Type and we reached a download speed of 18 Mbps and upload 18 Mbps, both of them being lower than usual for devices we test. 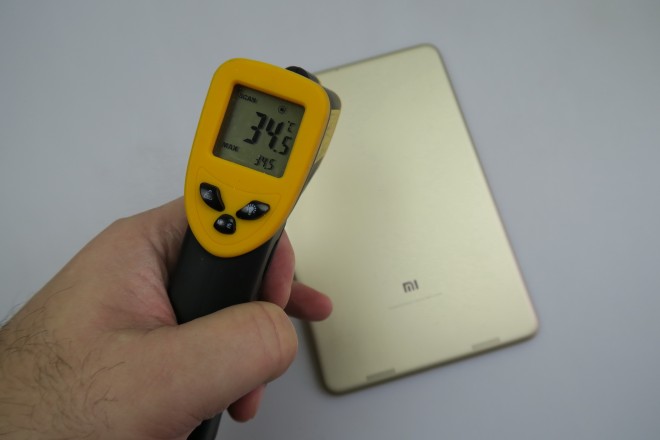 The lack of GPS, NFC and a 3G/LTE version is a problem here. I’d also like to mention the lack of haptic feedback here, something that was available on Mi Pad 1. Now we’ve reached the Browser + Benchmark section of the review, where things are not peachy at all. The MIUI browser is a horror story, with a strange way to show content and a ton of bugs and lag. It’s very slow and gets stuck often.

Chrome is the ideal replacement and it gets good scores in benchmarks, like 2087 in BrowserMark or 749 in Sunspider, as well as 4022 in Vellamo HTML5. The UI is fluid and there was no lag, albeit the boot was kind of slow. We ran Riptide GP2 and Order & Chaos 2 without a hitch though. Performance was good, but somehow the benchmarks looked bad. 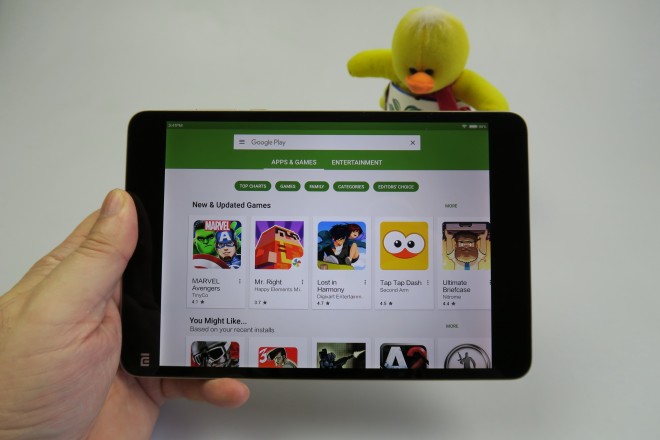 Mi Pad 1 still beat us in most of the tests and it didn’t even run some of them, but in spite of that the Mi Pad 2 has a much more fluid UI and no more compatibility issues with games and apps, caused by the predecessor’s option for a Tegra CPU. The OS used here is Android 5.1 with MIUI 7 on top and with a very minimal and simply approach.

It’s like a sketch of iOS and EMUI combined. There’s no app drawer, the UI is fluid and the icons are clear. Light colors are used, but some contours for non stock icons are badly drawn. Multitasking is done with an approach similar to the older iOS one, with a horizontal list of scrolling items, shown as thumbnails. 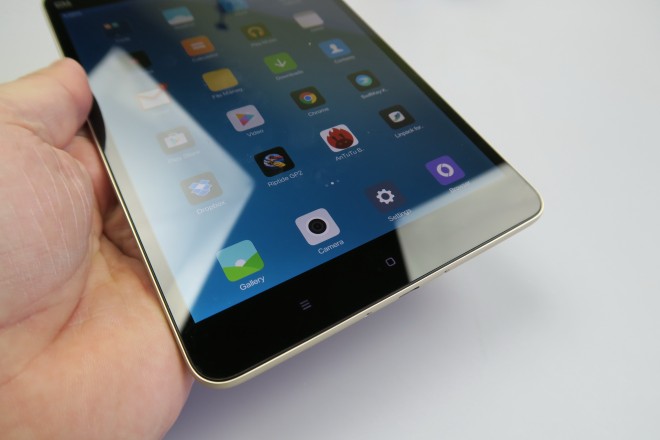 MIUI offers special homescreens for widgets and special homescreens for apps, plus it features some of the best looking widgets I’ve ever seen. Widgets are totally resizable and if you pinch the screen, you can move apps, use widgets, wallpapers and effects. The dropdown portion is transparent and shows notifications, Quick Settings and a Brightness slider.

Settings include Do Not Disturb, Child Mode and Privacy and luckily the preinstalled apps list doesn’t feature any bloatware. This is it:

The dock area holds the Settings, Camera, Browser and Gallery. As a bonus, people who buy the 64 GB version of the tablet can opt to have it with Windows 10 instead of Android. I like the stylish UI from MIUI 7 and its general approach, but I also found that the tablet shut itself down 3 or 4 times when being left alone for a longer while, which is a big no no. 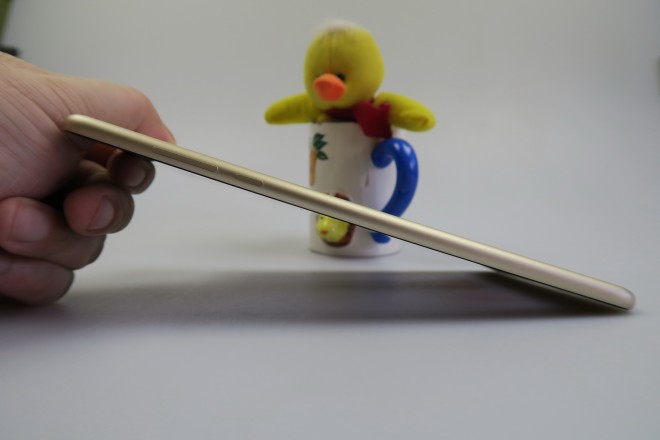 Now it’s time for the verdict!

Overall, the competition may have better batteries and cameras, plus more reputation, but for your money’s worth you get a damn good iPad Mini 4 rival, when it comes to raw performance and the ability to run the latest games. I’d say it’s easy to choose this model over the Nokia N1 and pretty much all 7.9 inch Android tablets right now, maybe except for Samsung’s, but Samsung doesn’t quite dabble in that format area.

You can buy this product from Gearbest: