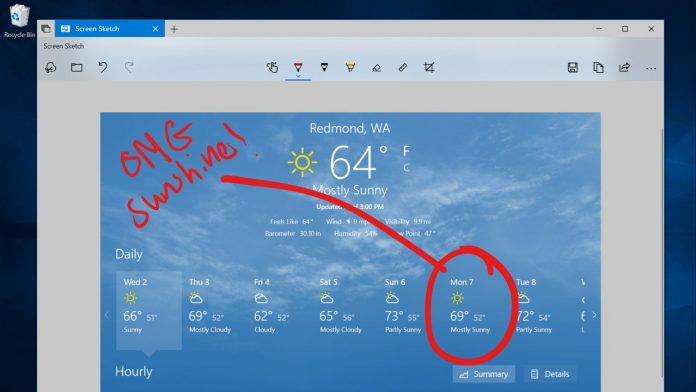 Fresh news about the future Windows 10 updates reveal that the platform is about to get an enhanced and improved screenshot tool. It had the sniping option, but there are more competent options like ShareX and Lightshot. Let’s see what’s new this time.

Screen Sketch has been bundled with the Windows Ink functionality in Windows 10, but it’s now being converted to a separate app, which can take screenshots and edit them. It also lets you annotate them. Microsoft has been experimenting with sniping tools for years and it may have just cracked it. The new feature lets you press Win key, Shift and “S” to bring up an area of selection and take a screenshot.

Then you share it from the clipboard. The app is also able to trigger a notification, in order for you to annotate the screenshot and share it. You can also do a Winkey plus printscreen combo. But that’s not all! Microsoft also wants to bring the Fluent Design to the new Windows build 17661 and the Task View area of the Windows 10 Timeline will have a soft blur effect.

Thus it’ll match the other effects added with the Windows 10 April 2018 Update. Focus Assist is also here, as a feature that kills notifications and lets you play full screen games in peace. HEIF support is also improved in the File Explorer. Expect more details about Redstone 5 at next week’s BUILD event.