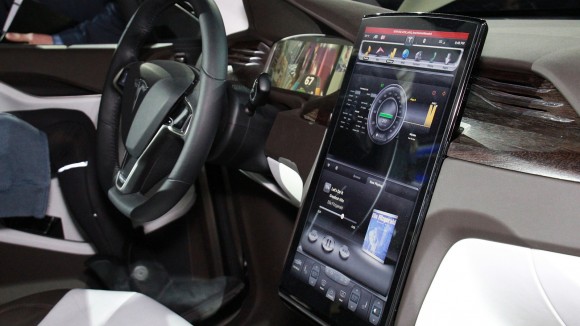 Tesla has a new SUV, the Model X that’s shown below, with particular emphasis on its touchscreen console. This model has some interesting falcon wing rear doors and just like its predecessor, Model S, the Tesla Model X packs a 17 inch touchscreen console with a fully digital driver binnacle.

Gone are the buttons, meters and indications, as Tesla moves all the entertainment systems, HVAC controls, safety options and more to this tablet-like mechanism. It also has a couple of USB ports, allowing you to connect external devices and it even supports third party apps, with Tesla promising periodic updates to keep the SUV up with modern technology and software. Just so you know, the Tesla Model X is available for pre-order now and it will cost around $50,000 with US government subsidies.

The first deliveries will begin in late 2013 to early 2014. Below you can see a presenter reading newspapers on that huge tablet incorporated into the car’s dashboard, checking out some maps, playing with its virtual keyboard and more: