We’re still waiting for a bunch of big brand Tegra 4 10 inch slates to hit the stores and in the meantime we get an interesting bit of a leak, showing us what seems to be a sub 10 inch tablet with such a CPU inside.

Back in June at Computex Taipei, Nvidia CEO Jen-Hsun Huang used a Tegra 4 prototype to show the world how a device of this kind could look, but since then the device has been forgotten. That sighting came back to us recently, as we spotted on the benchmark website GFXBench a device codenamed Nvidia Tegra Note Premium.

Could this mean that Nvidia is going the Microsoft way and making its own tablet? They already have a gaming console with Android and Tegra 4, so why not explore more areas? The Tegra Note Premium features a Tegra 4 CPU clocked at 1.8 GHz, a resolution of 1280 x 726 pixels, Android 4.2.2 and a 7 inch screen panel. It sounds a bit too much like a Nexus 7 II alternative and maybe that’s exactly what this is, for some parts of the world, who knows? 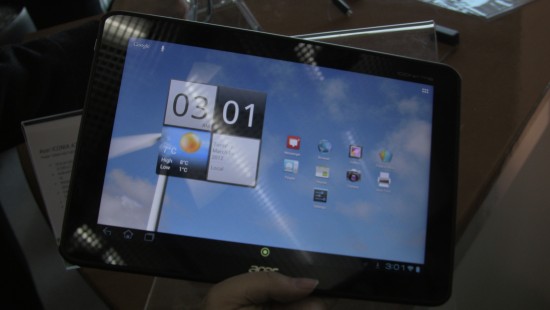